Broncos' Von Miller slips up, then steps up with plan 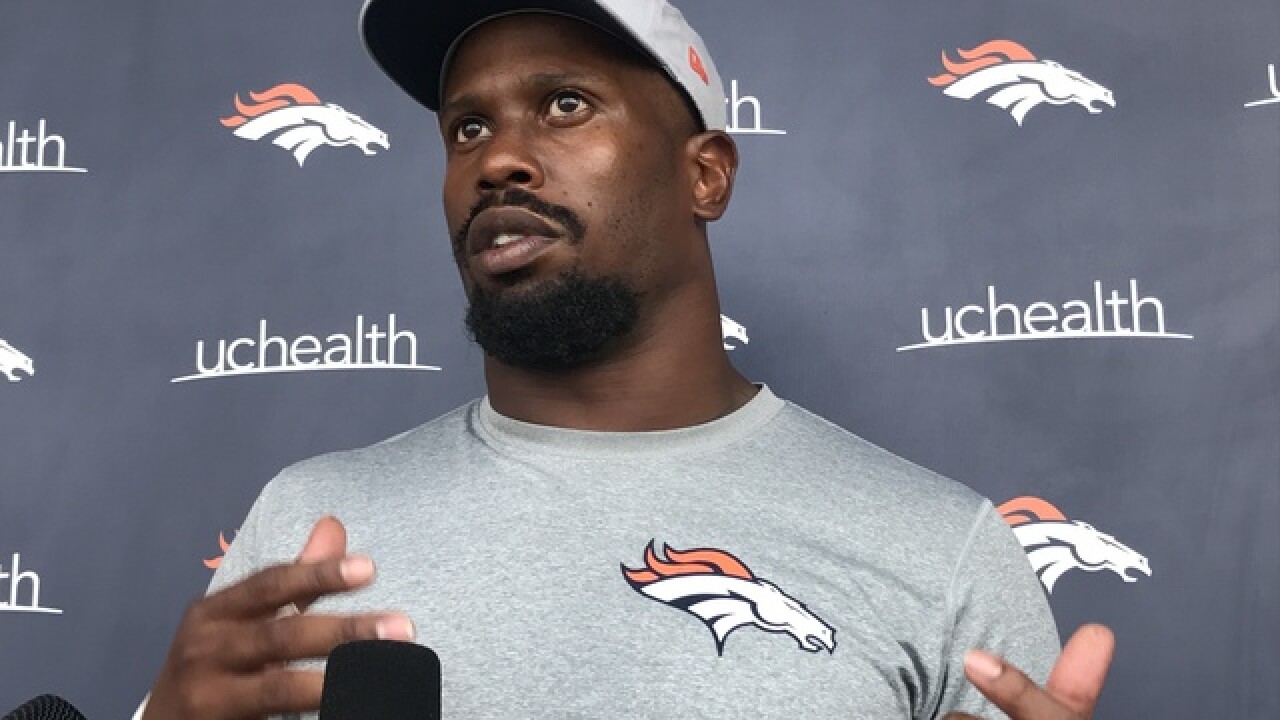 Thursday, Miller explained the soiree. Not before tripping onto the podium in a scripted Chevy Chase-like moment that lightened the mood.

"You get that?" said a smiling Miller before continuing. "Nobody likes bringing people together more than me. I enjoy spending time with my teammates, whether it's dinner on Friday nights or meetings at my house or dinners with the wives on Thursday. Or Halloween parties. It was a private event. It was a safe event. I had team security there. I had my private security there. We had all the Denver sports (teams) there. It was a safe event. Of course we got the news about Chad. I care about Chad as a person. The party was separate of his issues. I love the guy and wish the best for him."

The more salient question:  Can Von continue the party against the nitromethane-fueled Chiefs? Miller promised a win last Thursday against Arizona, saying defiantly, "We are going to beat their ass." He told me later, it applied pressure and produced a desired impact. His teammates had his back and put Cardinals quarterback Josh Rosen on his back. Miller netted 1.5 sacks, leaving him with 7.5 for the season, third best in the NFL.

Von remains confident. But he is not reckless. There were no guarantees Thursday.

"We have to remember it's a fight," Miller said. "We have to have that fight mentality. If we can do that I have all the faith in the world in the Broncos. I definitely think the sky’s the limit for Patrick Mahomes, but we have to find a way to make the sky fall this week.”

The Broncos own a six-game losing streak against Kansas City and haven't won an AFC West roadie since Peyton Manning retired. Before his scripted slip, Miller had a brief pause at practice as trainers tended to his left ankle. Nothing to worry about it, coach Vance Joseph said. The key is making the Chiefs concerned with him.

"Von brings it every down," Chiefs coach Andy Reid said. "You've got guys there (like Von and Chris Harris Jr.), who love to play. We'd better protect."

While the Broncos' season hangs in the balance -- they likely need to win two of the next four games to contend for a playoff berth -- the Miller-Bradley Chubb pairing has blossomed. Chubb leads all rookies with 6.5 sacks, and has discovered his niche moving upfield as he has found himself in coverage less (thank goodness). Chubb admitted before the Arizona game he is becoming more comfortable in the scheme with Miller.

Make no mistake, the pressure is on the Broncos. And it requires pressure from Von to pull off Denver's biggest victory in two seasons.

"Mahomes is special," Joseph said. "He's got some Brett Favre qualities where you almost hope he stays in the pocket. We have to contain him, chase and contain him."