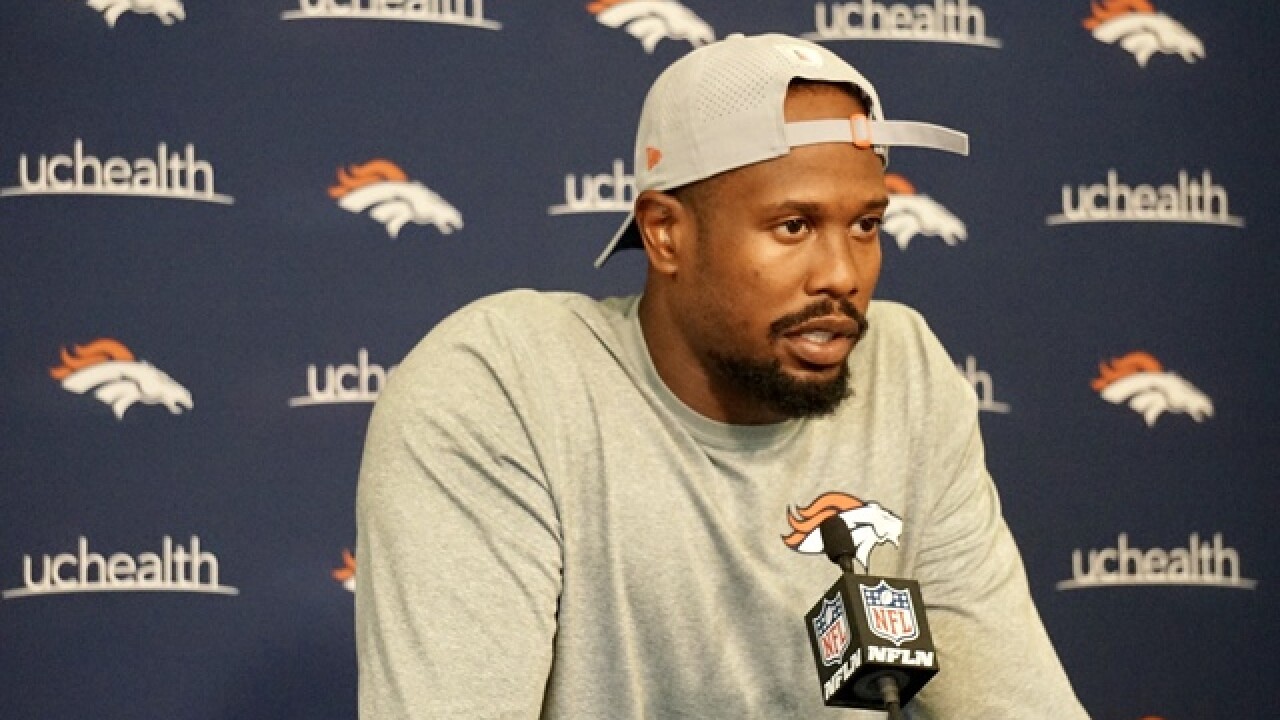 The point was driven home Saturday at 9:30 a.m. Per his custom, Miller raced onto the practice field, riling up the crowd. When it comes to the Broncos, there's Von and everybody else. He is in the fans' feelings. On a field with accomplished artists, he is Drake, the guy with all the big rings, nice things and big hits.

"Everybody was wearing purple for (Alzheimer's awareness), so we kind of wanted to get them excited," linebacker Brandon Marshall said of trying to pump up the fans. "Nobody gets excited for around here unless it's Von coming out of the locker room (laughing). Nobody cared that we were waving the towels. But when Von came out it was a big deal."

Von exists on a first-name basis. He transcends the Broncos. It has been that way since he won Super Bowl 50 MVP honors and appeared on ABC's "Dancing With The Stars." He surfaces on Pepsi, Old Spice and Geek Squad commercials, and hosted his own show on Facebook. All of this remains possible because of what happens on the field. Miller is the Broncos' best player. He boasts a resume that suggests he could win NFL Defensive Player of The Year honors if a consistent threat emerges from another outside linebacker.

“Von is a special player," coach Vance Joseph said. "And when Von’s on he can totally wreck practice. So I get it with Von. He goes hard but he understands that if he goes really hard, that can wreck practice. I am just being honest.”

Training camp becomes mundane, creating mental fatigue. Miller embraces the practice because, "I do this better than anything else. I love football." His joy is contagious. But in his eighth season, the Broncos need more leadership. Part-time pass rush consultant DeMarcus Ware told Denver7 on Saturday the key for Miller is to continue coaching up teammates during practice, pushing them to realize their potential.

Von continues to grow in this role -- he's a binding force in the locker room, striking friendships across the board -- but he is terrific at conversing on multiple topics. He weighed in on several Saturday: he's bullish on quarterback Case Keenum, whom he has known for years after meeting him at an autograph event, sees hope in the rookie class, including linebacker Josey Jewell ('Redbeard' as Von called him) and receiver Courtland Sutton. And he sort of understands old friend Peyton Manning spending a practice with Charles Woodson in Oakland.

“I saw Peyton did that. At first, I was like, 'what?' But you really have to think about it. Charles Woodson and Peyton Manning, they have done a lot of stuff together," Miller said. "What was it, like... 1982 Heisman ceremony when they were together?”

Marshall is playing this season about 10 pounds lighter in hopes of improving in pass coverage. He worked out with former Broncos defensive back Omar Bolden, using Bolden as his trainer. ... Starting with Saturday's scrimmage, eyes will shift to first-round pick Bradley Chubb. Sutton has stolen the headlines the first week. Joseph compared Sutton to Houston's DeAndre Hopkins as a rookie. Can Chubb be disruptive and remain around the ball? Ware wants to see Chubb make plays beyond sacks. He is impressed with the kid's size, which allows him to line up in a four-point stance. "He can stop the run," Ware said. ... Joseph was disappointed in the team's intensity at the beginning of practice the past two days.