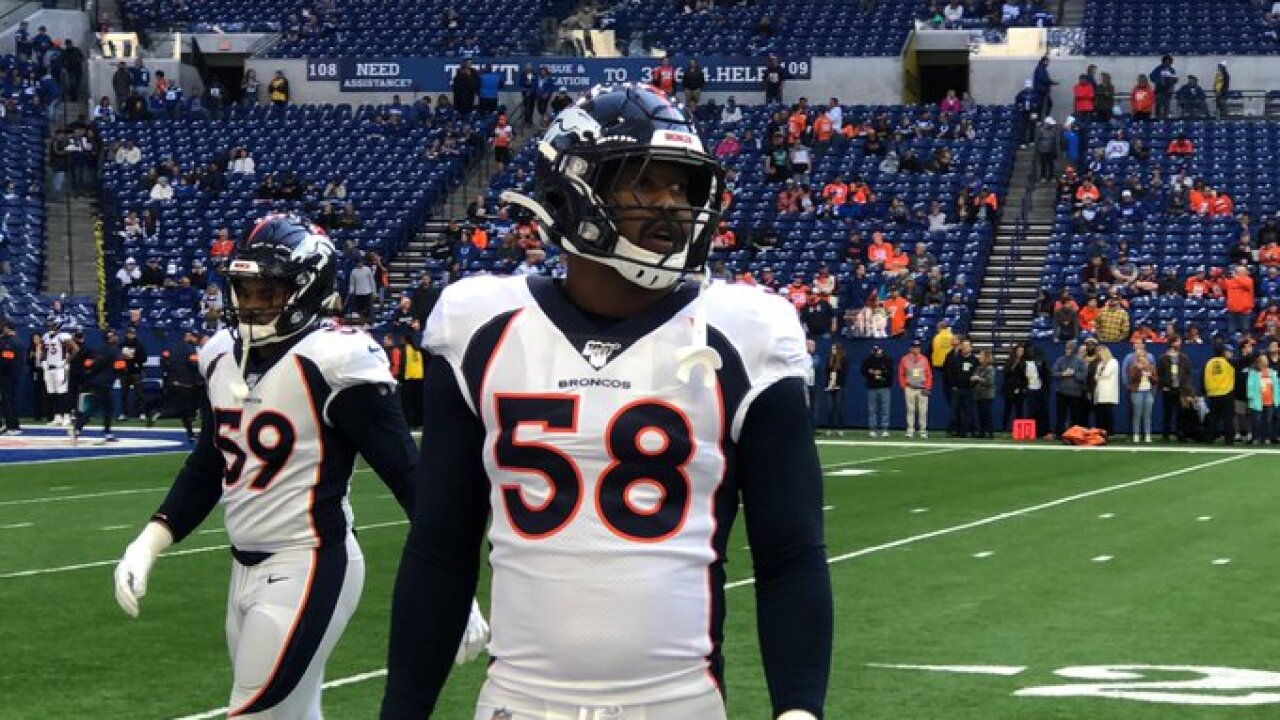 ENGLEWOOD — It's funny how time works in professional sports. Players enter as young men, feeling invincible, and successful. For the first eight years of Von Miller's career, his personality barely changed. He brought a childlike enthusiasm to work, connecting to teammates from the kicker to the outside linebackers.

His passion for football has never left. But for the first time, Von is noticing his age. He woke up this season and realized organically that he is no longer the kid in the room. He's a man. He's 30. And he's talking to younger players like DeMarcus Ware, Champ Bailey and others once spoke to him.

"I get all speechy all the time now. I have all type of sayings and all type of speeches for all the guys now," Miller said, noting he understands the nuance of leadership more now.

For years, Von said he would not be that player, that leader.

It is interesting in this season -- Miller's worst statistically since 2013 -- how invested he has become. It drove him to tears to sit out against the Chargers, snapping his streak at 95 consecutive games played. No one would have fussed much had Miller shut it down for December with the sprained MCL in his left knee. He told me Thursday that it was important for him to remain in the lineup.

"To earn respect," Miller said, "you have to be out there playing through the same thing other guys are dealing with."

No player is identified more with the Broncos than Miller. In absence of a star quarterback, he serves as the face of the franchise. It has been hard to wear a smile the past four seasons. The Broncos have missed the playoffs every year since winning Super Bowl 50 -- the pinnacle of Von's career that included MVP honors and his name transcending sports with an appearance on "Dancing With The Stars." With last Sunday's ninth-straight defeat to the Chiefs, the Broncos secured their third straight losing season for the first time since 1970-72.

Thursday, Miller repeated what he told Denver7 on Tuesday. He's not looking to leave, explaining that his raw emotion after the game was not about sending a message to the front office.

"I’m tied to the Denver Broncos," Millers said. "It’s pro sports and we all know things can change, but for me and my mindset, it’s a marriage I’m not looking forward to divorcing anytime soon."

Can Miller see this through, helping the Broncos restore their past glory? He said he was comfortable with playing more this season -- his snaps increased by almost 15 percent -- but admitted he needs to produce more sacks no matter how much he's on the field. And for the first time since 2016, hope is no longer a strategy. Miller sees pieces that make him think Denver is "close" to turning it around.

"We’ve got Drew Lock in his second year, Courtland Sutton in year three. We’ll have a healthy Ja’Wuan James next year. We’ve got the Colorado Kid (Phillip Lindsay). We’ll have (Bradley) Chubb back," Miller said. "I guess in other years it was just me being optimistic and hoping. But the reality is we do have a good team. We’re just one to two players away. One to two plays. One to two games away from where we need to be.”

Gotis undergoes knee surgery
This season has not gone how defensive end Adam Gotsis planned. In his free agent season, Gotsis struggled to gain traction in the defense, rebounded nicely, then hurt his knee. He underwent surgery Wednesday to repair a torn ACL and MCL in his left knee, he told Denver7. He is determined to bounce back.

"It sucks, but I feel good," Gotsis told Denver7 after dealing with knee issues since he was drafted. "I feel like I will be healthy, finally."