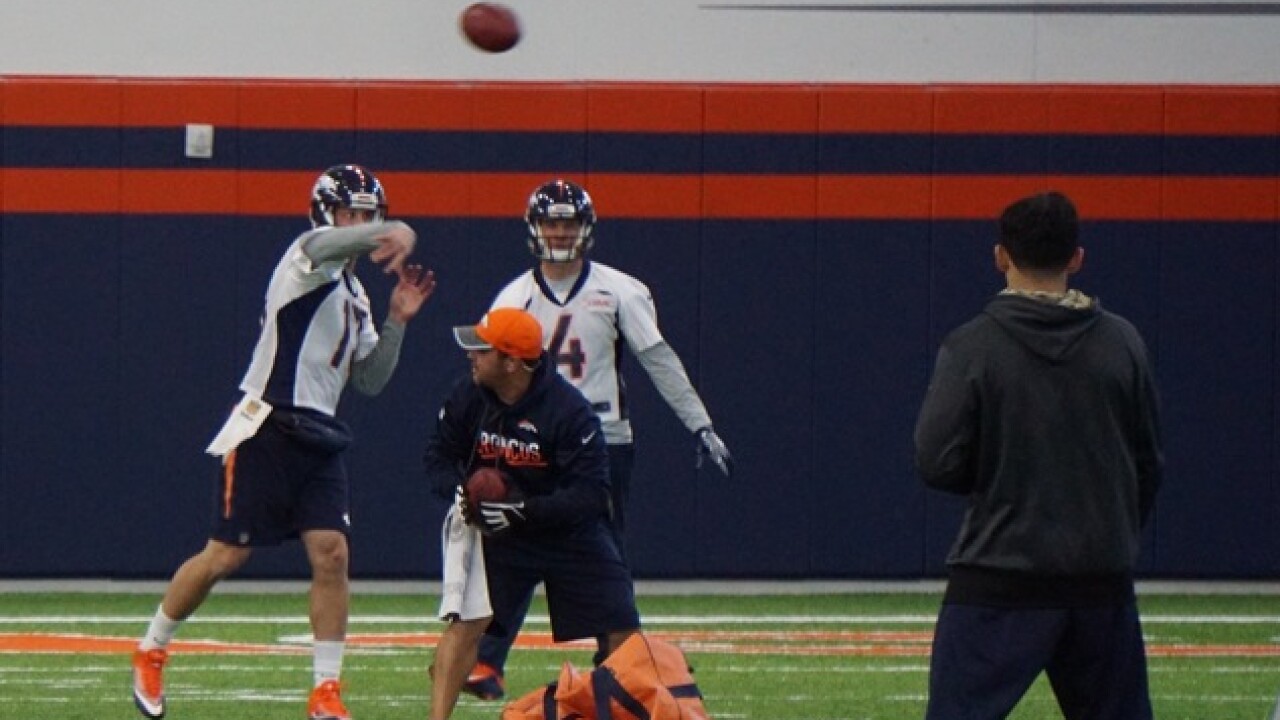 Trevor Siemian threw for the first time during an open media viewing period since injuring his left foot against Kansas City. Siemian, pictured at Thursday's workout, showed no issues setting his feet, and letting it loose on throws.

"It was very encouraging. We are where we thought we would be today," said coach Gary Kubiak of Siemian, who practiced with orhotics in his shoe.

His mobility remains a question mark. Siemian admitted it's not about playing, but "playing well." Kubiak seemed pleased with the way Siemian moved around in drills.

Therein lies the issue facing the Broncos. Can Siemian show enough progress to believe he can make plays with his feet, as he did against the Chiefs, and keep himself out of harm's way? And if compromised, where is the line of demarcation to determine his status? Is, for instance, a 75 percent healthy Siemian better than 100 percent ready rookie Paxton Lynch?

The Broncos are preparing both quarterbacks to play.

"We split the reps probably right down the middle," Kubiak said.

With information from the training staff, coach Kubiak will make this decision. Siemian is 7-3 as a starter and played arguably his best game in the overtime loss to the Chiefs. He threw for 279 yards and three touchdowns in the second half, making composed and calculated decisions against the NFL's best defense at producing takeaways. Siemian joined Peyton Manning (four times) and Hall of Famer John Elway (once) as the only Broncos quarterbacks to throw for at least 350 yards with three touchdowns and no interceptions.

Lynch struggled in Siemian's place against Jacksonville. Determined not to turn the ball over, Lynch looked robotic an rusty, expected for a kid making his second start. Lynch finished 12 of 24 for 104 yards, and went 0-for-4 on passes of more than 20 yards. If Lynch is needed Sunday at Nashville, the former Memphis star will be counted on to make more plays.

The chances of linebacker Brandon Marshall playing Sunday nosedived with his absence at Thursday's practice. Marshall told Denver7 his left hamstring, re-injured in the second half against Jacksonville, feels "OK." But there's growing signs he will not be available at Tennessee. If Marshall isn't ready, Corey Nelson will start. Nelson played a season-high 77 snaps in week 8, and participated in 40 last week, 30 on passing downs. Nelson's role has grown this season because of his improved work in coverage.

Nelson, who would have the transmitter in helmet to communicate with coaches, embraces a physical game.

"When I was at Oklahoma, we did the Oklahoma drill (of linebackers matched up against running backs) . I look forward to it," Nelson said. "The coaches are showing a lot of faith in me, and trusting in what I can do out there."

Teammates continue to stump for Von Miller as the NFL's Defensive Player of the Year. Defensive coordinator Wade Phillips said of last week's Jacksonville matchup. "I have never seen a guy double teamed more in a game." Miller leads the NFL with 13.5 sacks. Miller continues to be unfazed by the attention. However, he admitted he knows he's contending for Defensive Player of Year honors. "It's special. But all of that comes with winning," Miller said.

Miller shook his head when asked about the narrow definition of players at his position. In many cases, outside linebackers become typecast as pass rushers. "Every year when we stand up in the meeting, I introduce myself and say, 'I am Von Miller and I want to make plays.'^" Miller could be important in the rush defense along with safeties T.J. Ward and Darian Stewart.

The Patriots released former Broncos defensive tackle Darius Kilgo. ... Phillips praised Tennessee quarterback Marcus Mariota's ability to throw the ball down field. Mariota makes good decisions in the red zone. He's never thrown an interception inside the 20-yard line in his career. ... Outside linebacker DeMarcus Ware on the Broncos making a push. "How bad do you want it?... It's about the want to."