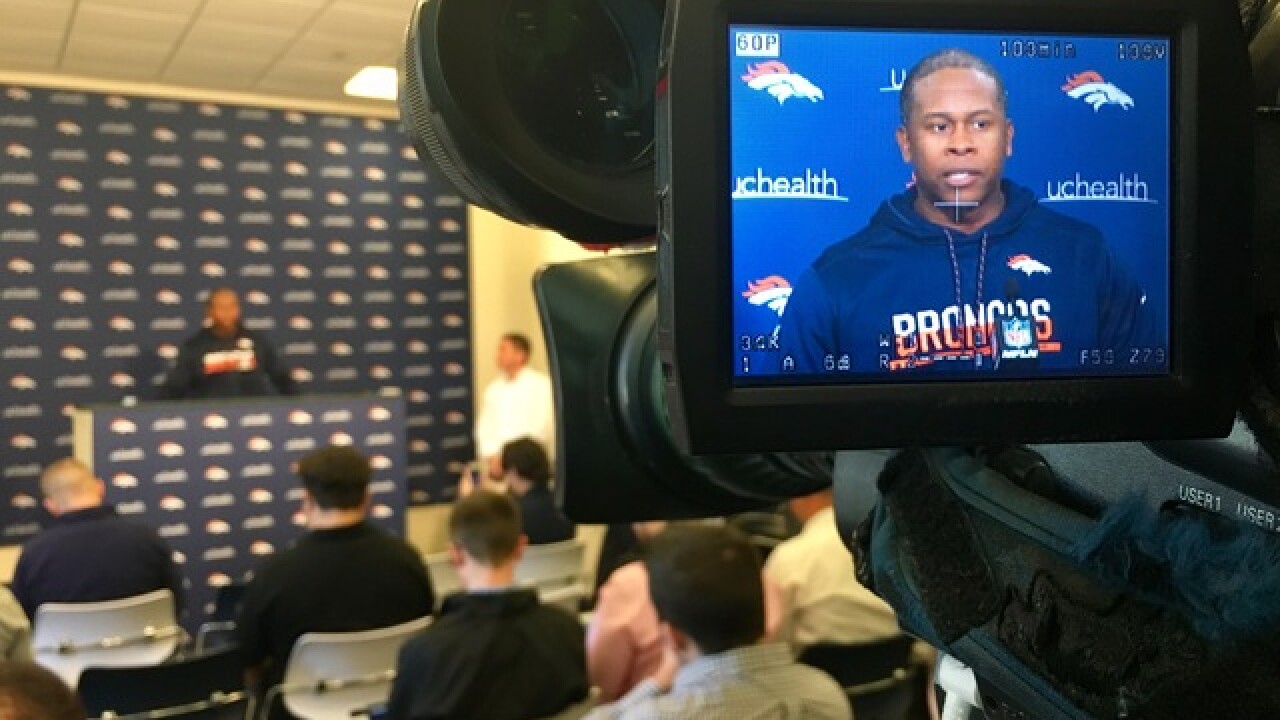 CENTENNIAL, Colo. -- The answers to the texts sounded more encouraging with each passing week. Trevor Siemian relayed to Denver7 the progress on his surgically-repaired left shoulder. From "healing," to working hard and rehab "going well," to last week's, "I am stoked to get started."

Joseph addressed his team Monday for the first time as their coach. He kept the message succinct. There is no time to waste with 38 days of work together before training camp.

"It went great," All-Pro cornerback Chris Harris Jr. told Denver7. "I love [Joseph's] energy. I think everybody was happy to get back to work."

The July practices could be interesting if Joseph receives his wish. The quarterback competition -- with the specter of Tony Romo removed -- features candidates, not favorites. Siemian is not playing catchup. And Lynch is trying to make up ground, taking a step in the right direction by arriving in Denver two weeks ago to acclimate to the altitude.

"It's going to be an open competition -- 50-50," Joseph said, adding, "We have these two young guys with bright futures. It's open and going down to the wire, I hope. The best guy will play."

Siemian underwent surgery for strategical reasons. He wanted his shoulder joint fixed so he could lift and gain strength. Siemian missed one game last season because of the injury that lingered for two months. The former Northwestern standout threw 18 touchdowns with 10 interceptions, while carrying an added burden when the ground attack disappeared in the second half.

"Running the football is the best way to put the defense at risk," Joseph said. "That can help the quarterbacks."

C.J. Anderson sits atop the depth chart. He underwent surgery to repair a torn meniscus in his right knee in October. He has healed, and is easing back into the grind. Anderson's weight has fluctuated throughout his career. However, until last season, he has shown a knack for producing when it mattered most down the stretch.

"I have no concerns. Phase 1 is designed to get the players into football condition. I have no concern as far as C.J. getting in shape," said Joseph, whose team has visited with playmaking draft prospects like Christian McCaffrey and Joe Mixon. "We've got plenty of time to get him into shape. Obviously with C.J. we're going to take it slow and make sure he is really ready to go for OTAs. That's the most important date for C.J."

Joseph remains pleased with the Broncos' free agent additions. The Broncos delivered a nuanced attitude adjustment upfront on both sides of the ball with defensive lineman Domata Peko and Zach Kerr and offensive linemen Ron Leary and Menelik Watson.

"Tougher and meaner up front. There's something to be said about that because those teams do win," said Joseph, who relayed that center Matt Paradis (hip surgeries) should be cleared on July 1. "Big and tough works up front."