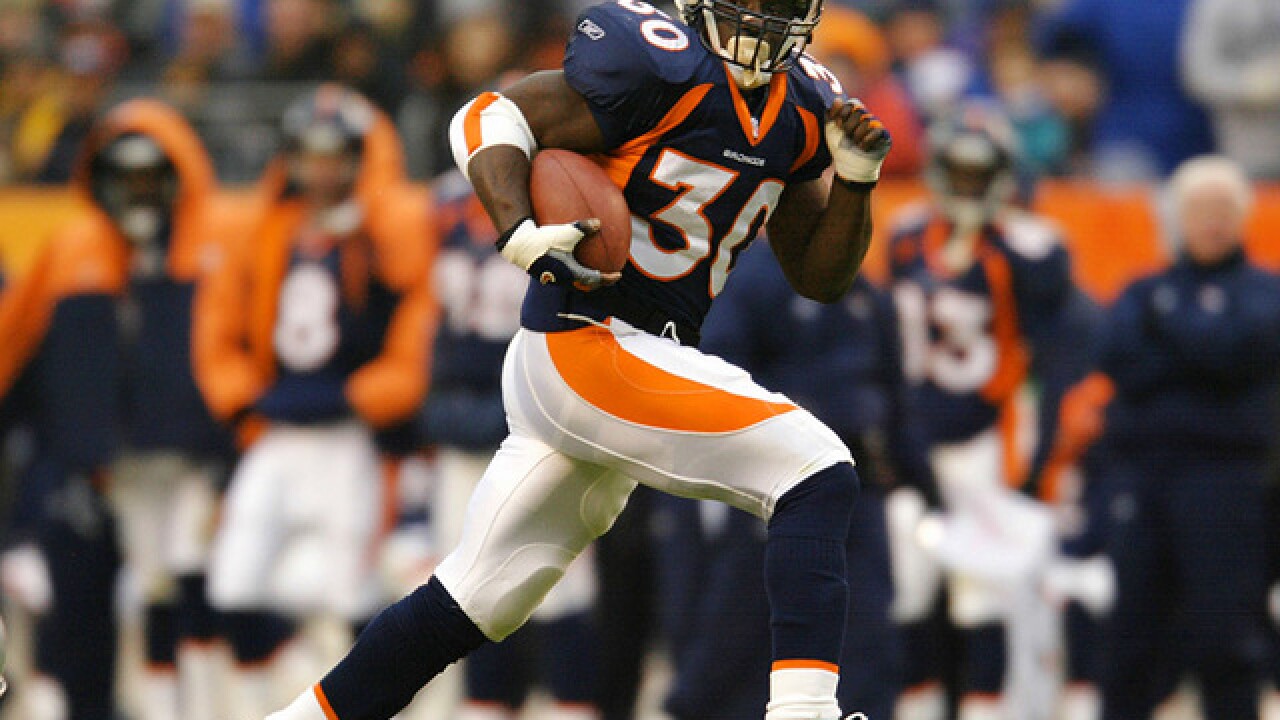 Copyright 2017 Scripps Media, Inc. All rights reserved. This material may not be published, broadcast, rewritten, or redistributed.
Brian Bahr
<p>30 Dec 2001: Running back Terrell Davis #30 of the Denver Broncos hits his stride with a 34 yard gain against the Oakland Raiders in the second quarter at Mile High Stadium in Denver, Colorado. DIGITAL IMAGE. Mandatory Credit: Brian Bahr/Getty Images.</p>

DENVER -- When Terrell Davis appeared at Dove Valley last summer, his anticipation became impossible to ignore. His career long over, only one honor had eluded him. He could taste it. He could smell it. And on Saturday night, his appetite was quenched. T.D., as he was known by fans, scored his biggest touchdown, rushing into immortality with his selection into the Pro Football Hall of Fame.

“A huge Mile High Salute to my friend,” tweeted former teammate Ed McCaffrey. “He so deserves to be among the greats.”

Congrats, @Terrell_Davis, on your selection to the @ProFootballHOF!! Couldn't have happened to a better teammate, player or person!! pic.twitter.com/3gA0IH334C

In Canton, Davis joins fellow Broncos John Elway, Shannon Sharpe and Floyd Little among those who spent either most or their entire careers in Denver.

Davis boasted a Gale Sayers-type candidacy – burning bright for a shorter period time. He produced unforgettable numbers, making it impossible to write the history of the game without him. Davis made All-Pro three times, appearing in 61 games before his career was shortened by a devastating knee injury. The former Georgia star rushed for 7,594 yards, posting 61 touchdowns. He is the only player in NFL history to win league MVP, Super Bowl MVP honors and deliver a 2,000-yard season.

Elway had never won a Super Bowl until Davis blossomed into a super star. Davis averaged 97.5 yards per game and 4.6 yards per attempt, Canton-worthy production. What's more, he played his best when it mattered most. In eight playoff games, he gained 1,140 yards with 12 touchdowns on 5.6 yards per attempt. He produced 142.5 yards per game in the postseason, a breathtaking stat with no peer. Only Hall of Famer Jim Brown averaged more yards per scrimmage per game than Davis during his career.

He joins LaDainian Tomlinson, Jason Taylor, Kurt Warner and Morten Andersen in the 2017 class. Former Broncos safeties John Lynch and Brian Dawkins were not elected. It marks the first time since 1977 that two running backs were selected.

Davis admitted he was getting antsy last summer when he visited the Broncos with NFL Network.

"The longer you are out, the more you start to get a taste of it," Davis said. "You showed me the doughnuts. You brought me in a doughnut store and you're walking me around, I can see the glaze -- I'm a glazed doughnut person -- but you got the glass in front of me, you're letting me just smell it as they're baking them. Now I can smell it, but I can't taste them. That's where I am. Just imagine that feeling."

The wait is over. TD has touched down in Canton.