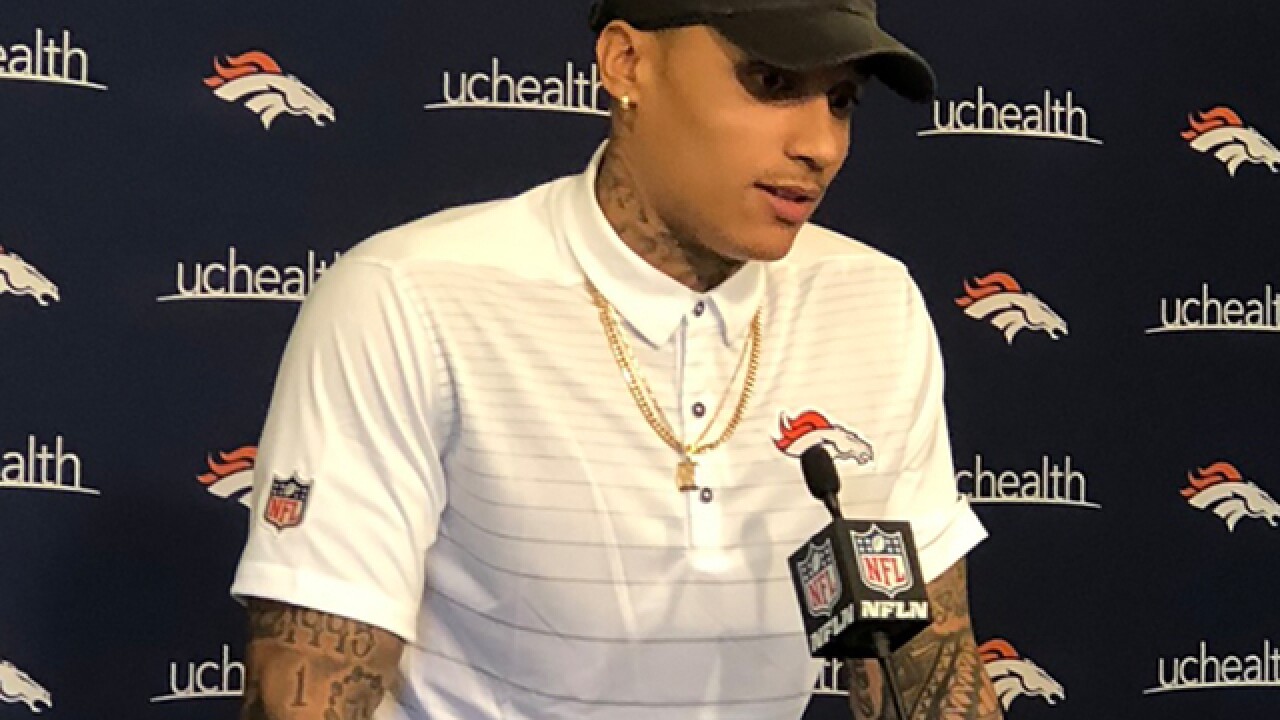 Copyright 2018 Scripps Media, Inc. All rights reserved. This material may not be published, broadcast, rewritten, or redistributed.
<p>When Su'a Cravens learned he had been traded to the Denver Broncos he broke out in a show tune as if he were standing in front of Lionel Richie, Katy Perry and Luke Bryan on ABC's "American Idol." Cravens met the media Monday, and explained his joy.</p>

CENTENNIAL, Colo. -- About the singing.

When Su'a Cravens learned he had been traded to the Denver Broncos he broke out in a show tune as if he were standing in front of Lionel Richie, Katy Perry and Luke Bryan on ABC's "American Idol."

Cravens met the media Monday, and explained his joy.

"Once I found out I had to express myself and let everyone know how happy I was to be coming here," Cravens said. "It was organic. I downloaded 'A Whole New World." I thought it was perfect."

Cravens relishes a fresh start. He arrives in Denver with a chance to make a difference, while rebooting his career.

Last season proved difficult, if not confusing. He did not play, and was not medically cleared until December after five visits to internationally renowned sports-related concussion expert Micky Collins in Pittsburgh. Through those exams regarding post-concussion syndrome, Cravens came to an understanding about his personality changes and mood swings.

However, he suffered criticism. His commitment was questioned. He admitted he was called a "quitter," and explained that someday he would reveal the entire story of his last year in Washington, how he went from a second-round draft pick to a ghost.

Monday, though, was about looking through the windshield.

"Having it taken away with no choice, it matured me in a way that I will never take it for granted again. There was a point where I thought I was done with football. But the need to compete and play with your brothers never went away. I love football," Cravens said. "The fact that the Broncos gave me this fresh start, I am thankful for the opportunity."

Beginning in February at the NFL combine, the Broncos zeroed in on Cravens for a reason. He potentially addresses a glaring need as a hybrid safety/linebacker. Cravens views himself as a safety, and should vie for playing time with Darian Stewart and Will Parks, a longtime friend. Cravens possesses the size to provide run support -- a version of former safety T.J. Ward perhaps -- while improving the team's porous coverage against big targets in the passing game.

"I love the pick up. He's perfect for our defense," Broncos nose tackle Domata Peko told Denver7. "He can play multiple positions and can really cover tight ends."

Cravens knows the Broncos defense as a fan. He admitted that he was drawn to their games because of the way Denver plays. It did not hurt that after he joined the Broncos he spoke with general manager John Elway -- Cravens' uncle played with Elway at Granada Hills High School, but the safety was too starstruck to mention it -- and All-Pro linebacker Von Miller.

"I think we have something brewing," Cravens said. "They wanted me here."

Cravens smiled throughout his press conference. He bubbles optimism about his new team, and could not hide his excitement about the facility and new digs. Enough to break out in song? Not Monday.

But if Cravens can provide the versatility his athleticism suggests, it will be music to the Broncos' ears.