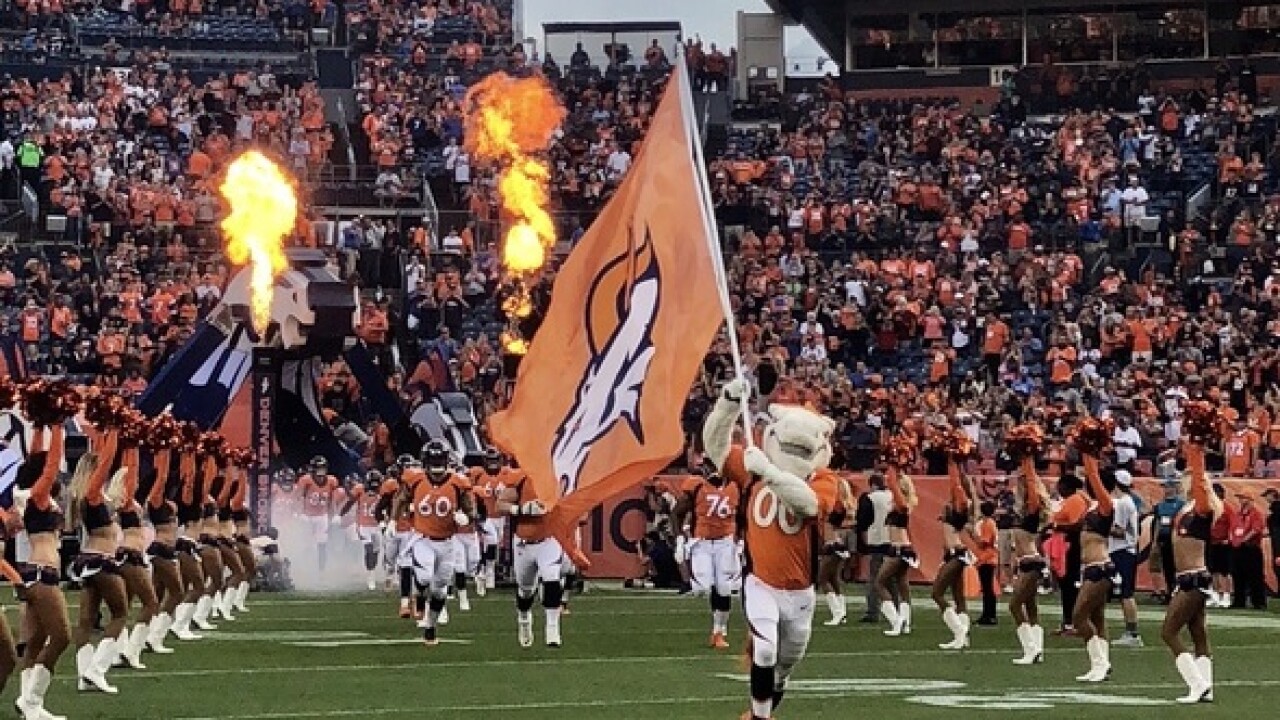 DENVER -- There are things the Broncos starters wanted to make absolutely clear on a muggy Saturday night.

Critiqued by coach Vance Joseph, effort questioned by general manager John Elway, the first-stringers sent a message: 2017 is officially, and mercifully over.

No longer can the Broncos be connected to the stench of last season. Febreze filled the air in Denver's final home preseason game against the Chicago Bears at Broncos Stadium at Mile High.

The Broncos fell 24-23, but worry little about the scoreboard.

The preseason represents a paradox. Nothing counts. But everything matters. The Broncos needed a quick start to cleanse the disappointing opener against the Vikings.

"It felt like how we have been performing and making plays in practice," quarterback Case Keenum said. "Felt good to do it on that field. And it felt good to put the ball in the end zone."

As so often has been the case since 2015, the arrow pointed the right direction because of the defense. Lined up opposite of Von Miller, rookie outside linebacker Bradley Chubb corralled Bears quarterback Mitchell Trubisky for a safety after an errant snap.

"(Chubb) has been playing good football," Joseph said. "We have young guys (on both sides of the ball) that are doing some good things."

It caffeinated an offense that reeked of desperation.

Following a failed gadget play on the first drive, the group settled down under Keenum. On first-and-10 from the 40-yard line, he zipped an 18-yard rocket to rookie DaeSean Hamilton, snapping the streak of three three-and-outs. Keenum exhaled and brought the crew to life.

Keenum finished the drive 6-for-8 for 50 yards, connecting with six different targets. With first down at the 8-yard line, the drive sputtered when officials flagged Emmanuel Sanders for pass interference. The 10-play drive produced points on Brandon McManus' 26-yard field goal. The Broncos led 5-0, but it felt swollen after last week.

"I tell you what, man, Case is a good quarterback," Sanders said on the TV broadcast. "He's been showing it the entire training camp."

Following a Bears touchdown, Keenum looked every bit a QB1 in the second quarter. He guided a 10-play march, refusing to flinch under pressure even after a sack. Keenum converted a key third down to Sanders. He took a shot down field that led to a 45-yard interference call. After Royce Freeman showed the shimmy and vision he featured at Oregon on a 4-yard shake-and-bake score, Keenum delivered a two-point conversion toss to tight end Jeff Heuerman, shoving the Broncos ahead 13-7 with 10:27 remaining in the half.

After a week when first downs were rumors, the Broncos scored on four straight possessions -- a pair each directed by Keenum and Chad Kelly. Elway admitted he hasn't ruled out adding a veteran quarterback given Kelly's inexperience -- two football games in 653 days. However, Kelly, 7-for-9, 90 yards, gave him reason for pause on a trade. Kelly completed five of his first six passes, among them a 16-yard scoring dart to rookie Courtland Sutton.

Joseph non-committal on Kelly remaining the backup, saying he's "in the spot for now."

The defense no longer inspires fear. But it showed glimpses of its past evil. After the Bears picked on rookie cornerback Isaac Yiadom, Bradley Roby restored sanity by racing into Mitchell Trubisky's face to force an incompletion to end Chicago's opening drive.

Everything was different. Better. By the time Paxton Lynch entered, more than half the crowd of 65,832 had exited, and many of those remaining greeted him with boos. He completed 5 of 11 passes, and his attempt to rally the team ended with Isaiah McKenzie's fumble with 57 seconds remaining.

"I want to be the quarterback, not the backup," Lynch said in what feels like was his last home performance as a Bronco. "I am not a quitter."

This would have been a headline last summer. Or a story last week. No longer.

The Broncos have moved on, leaving 2017 in the rearview mirror. Whether this night allows the offense to bloom is uncertain. But one thing is clear: Hope has returned.

"Better. Way better," defensive end Derek Wolfe said. "It was personal. Now we have to continue it."

Harris, Barrett sit out with injuries

The Broncos defensive improvement began without two key performers. As expected, starting cornerback Chris Harris Jr. (oblique) and rotational pass rusher Shaquil Barrett (hamstring) sat out. Harris was enjoying his best camp before the injury. It would not be a surprise if sits next week as well given the risk-reward involved. Harris spent part of pregame coaching up teammates, including the young stable of running backs.

Veteran Tramaine Brock, who missed the opener with a hamstring opener, filled Harris' role. Brock was steady after he barely played last season with Minnesota. Rookie Isaac Yiadom remained a target, drawing a penalty for tackling with his head down followed by an interference call.

The Broncos did not escape without injuries. Cornerback Marcus Rios (foot, left locker room wearing a boot), safety Will Parks (knee laceration that was treated during the game), running back De’Angelo Henderson (lower back) and Clinton McDonald (bicep).  ... Linebacker Brandon Marshall and Demaryius Thomas exited to the locker room during the national anthem for the second straight week. Thomas did not play in the game because of a sore wrist. Marshall rebounded after struggling last week, delivering a 4-yard tackle for loss that set up Chubb's safety. ... The Bears' Deiondre Hall delivered a vicious, illegal hit on punt returner Isaiah McKenzie on a fair catch. McKenzie received medical attention after the play for a potential concussion. ... Pass rush consultant DeMarcus Ware made his game coaching debut. Players credit Ware for helping them accelerate their development. Chubb benefits most from Ware's presence. ... Safety Su'a Cravens, sorely needed in coverage against tight ends, remains out with a sore knee. The plan remains for him to return to practice this week. It's unclear if he will make his preseason debut Friday against Washington, where his departure ended badly. ... Receiver Tim Patrick, who electrified Thursday's practice with his special teams work, made a leaping 27-yard catch in third quarter. He is pushing for a roster spot. ... Linebacker A.J. Johnson, playing in his first game in nearly four years, netted an impressive special teams tackle on kick coverage in the third quarter. ... Connor McGovern and Max Garcia worked at center with the second team. The second half offensive line from left to right: Billy Turner, Elijah Wilkinson, Garcia, Jeremiah Poutasi, and Cyrus Kouandijo. ... Ron Leary said his knee is improving. He believes he will be 100 percent for the season opener vs. Seattle.