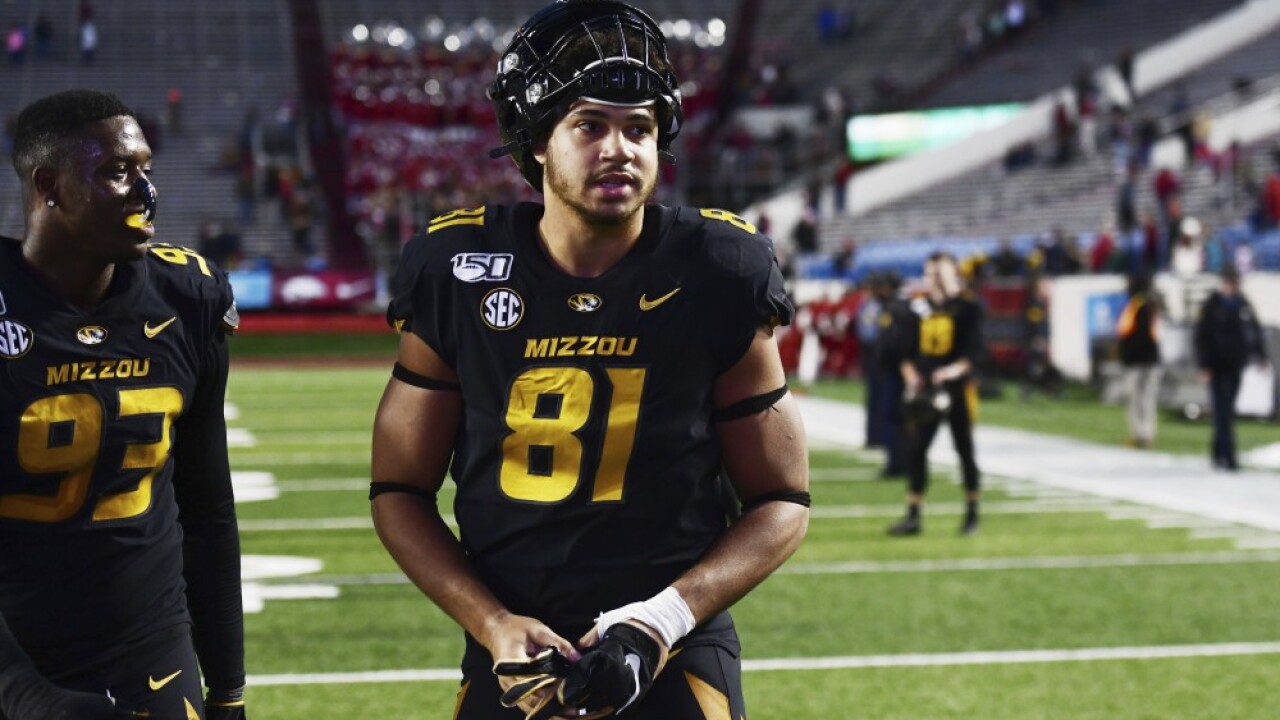 DENVER -- The Broncos committed to Drew Lock this offseason. The next step? Fueling his improvement.

They had a plan in the draft, adding nitromethane to the passing attack.

The Broncos opened the final day of the selection process Saturday by taking Missouri tight end Albert Okwuegbunam with the 118th pick overall in the fourth round. They added Wake Forest linebacker Justin Strnad in the fifth round with the 178th pick overall. With the 181st pick, the Broncos selected Fresno State guard Netane Muti. Muti was projected as a second-day selection in some mocks, but injury concerns dropped him in the draft.

Okwuegbunam played most of his college career with Lock and brings track speed to the table. He ran one of the fastest 40 times by a tight end in 20 years at the combine, clocking a 4.49. Redline speed has been the defining trait of the Broncos' offensive picks. They added burners Jerry Jeudy and K.J. Hamler in the first two rounds, a direct response to the Kansas City Chiefs beating them nine straight times, including outscoring them 53-9 last season.

Okwuegbunam credited Lock for helping him with the Tigers, saying "he made it easy."

"We had good chemistry. Off the field we were brothers. That translated on the field. I felt a lot of times in tough situations that he knew he always had an open throw in me," Okwuegbunam said. "I just feel all across the board that chemistry is there."

Okwuegbunam finished his college career with 98 receptions for 1,187 yards and 23 touchdowns. In Lock's last season at Missouri in 2018, Okwuegbunam caught 43 passes for 466 yards and six scores.

"Albert has a great combination of size and speed, can block & recover. He had a great year with Drew in ‘18 as an added bonus!" general manager John Elway said.

His ability to stretch the field could create another weapon in the passing game that has been overhauled this offseason.

"You can put a strain on the corners and safeties. They can't favor one side of the field. We can hit them everywhere," said Okwuegbunam. "The ability to spread us all out creates mismatches, especially with the tight ends. We are going to be too fast for a linebacker and too big for a DB. I think it's going to be a great thing happening and I can't wait to be part of it."

Okwuegbunam joins Noah Fant on the team. Fant set Broncos rookie records for a tight end with 40 catches and 562 yards.

Strnad brings an interesting skillset. He's built like a linebacker but brings safety-type quickness at 6-foot-3, 238 pounds. Strnad projects as player with a high upside who could help on special teams and in coverage in different defensive packages.

"I do think my best football is ahead of me," Strnad said. "I played all special teams my first two years of college so I believe I can help there right away if they need me."

Added Elway, "Justin is a smart player with good cover skills. And he also has solid range and movement in space!"

Muti, who once played the snare drum and tuba in high school, was ranked as Pro Football Focus' top-rated offensive guard in this draft. Injuries were a major issue for the 6-foot-3, 315-pounder, complicated by teams not being able to give more medical intel when all visits were shut down. He only played 19 games in four years, missing time because of a ruptured Achilles and, most recently, a lisfranc foot issue.

"I think I was the best guard in this class. I feel like they got a steal. I can’t wait to be part of the family and help us win games," Muti said.

His strength is impressive. His 44 reps of 225 pounds at the combine was the most in eight years.

"Netane is a powerful run blocker and a strong anchor vs bullrushers as well," Elway said.

In the seventh round, the Broncos selected Florida receiver Tyrie Cleveland with the 252nd pick. He is 6-foot-2, 209 with good speed with a 4.46 40. With their final pick, the Broncos chose defensive end Derek Tuszka from North Dakota State. He trained at Landow Performance this offseason.