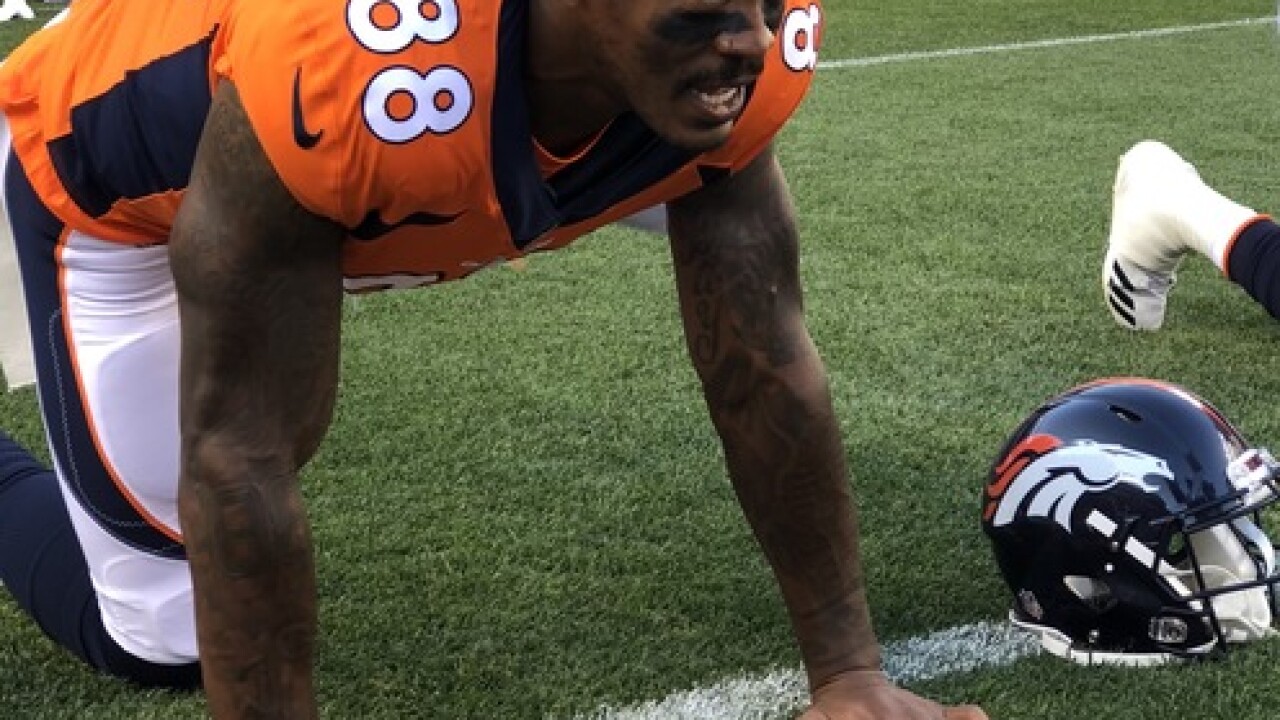 DENVER -- At 6:56 p.m. Saturday, Case Keenum slapped five with a guest relations worker, then bathed in the loud applause of his first introduction as a Bronco. Three hours later, he stood in front of the media explaining why his fresh start bore an unnerving resemblance to last season's finish.

"We never got into rhythm," Keenum said. "We need to learn from it and get better."

The defense contributed to the ugly start, gashed by the Vikings on a first drive. The Broncos lost 42-28 to Minnesota, the outcome irrelevant, but the breakdowns that led to it are not.

My Denver7 takeaways leading into Tuesday and Wednesday's joint practices with the Chicago Bears.

It was two series. As frustrating as Saturday was -- I get it -- perspective helps. Most games include 12 drives. If the Broncos can't move the ball in the third preseason game against Washington, panic and anger will take over. The Broncos didn't game plan for the Vikings, but it fails to excuse the sloppy execution -- a missed pass, and a false start. They need to get the receivers involved, like Demaryius Thomas, Emmanuel Sanders, this week. Gaining momentum vs. the Bears this week would instill confidence. It starts with Keenum.

Blown assignments, inexperience. Welcome to the Broncos' defensive series to open the game. After creating a second-and-20, the Broncos got gashed on a pair of runs by Latavius Murray of 20 and 21 yards. Here's what bothered me. The Broncos started slow, looked reactionary and blew simple assignments. That sounds a lot like last year. And Kirk Cousins picked on rookie corner Isaac Yiadom at the goal line. This is an important week for Tramaine Brock to prove his health or might be time to call Kayvon Webster for depth.

Many in the NFL considered Paxton Lynch a three-year project when drafted. That's what makes this summer so disappointing. He has failed to make progress. In fact, he appears to be going the wrong direction. I am not sure how much longer the Broncos can carry on the charade that Lynch will be OK. Some players are already wondering when Chad Kelly will get second-team reps. If the team demotes or moves on from Lynch, the Broncos have to consider signing or acquiring a veteran backup.

Complicating matters for Lynch, Kelly emerged as a fan favorite. The only thing louder than boos for Lynch were cheers for Kelly. He scribbled outside the lines, took big hits and showed poise. The caveat? It came against third-stringers. If the time isn't right for second-team reps, then when? I'd give him multiple series with the No. 2s during the workouts with the Bears. He has earned the right for those reps.

Royce Freeman showed maturity in how he read the zone play on his 23-yard touchdown run, setting up second-level defenders. If he shows he's functional in pass protection, I don't see any reason not start him in the season opener.

The offensive line remains a question until it's not. Right tackle Jared Veldheer stalled momentum that was never regained with a first drive false start. This group must show more. The Broncos claimed former Colorado Mesa standout Austin Fleer, a tackle, on Sunday and released Leon Johnson. Getting left guard Ron Leary back will help. He sat out Saturday as a precaution with his knee.

Receiver Isaiah McKenzie reacted with humility to last season's failure. He put in the work, and now is a real threat to enter the season as the starting punt returner after his 78-yard score on Saturday. This is a start, though. He must protect the ball for the next three weeks.