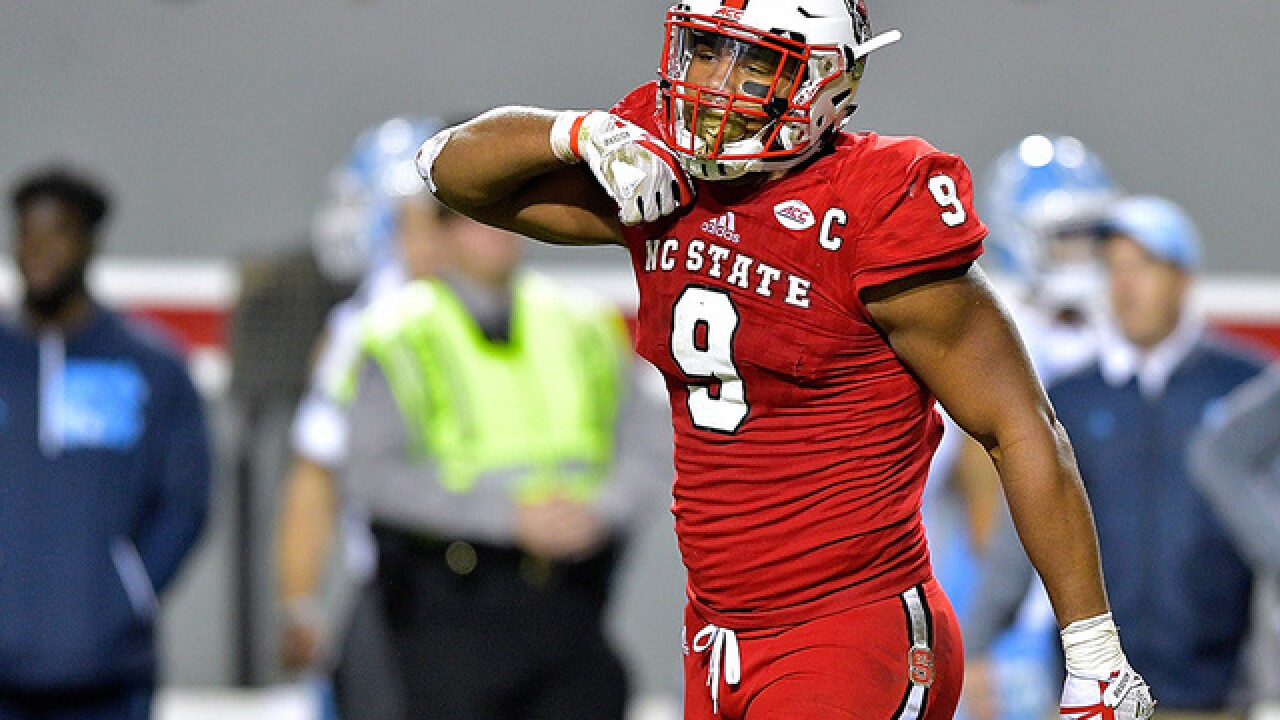 CENTENNIAL, Colo. -- The Broncos weighed the desire to land a franchise quarterback with landing an immediate impact player. After briefly exploring a trade with the Giants to acquire the second overall pick, the Broncos became defensive.

The Broncos had a deal with Buffalo to trade out. Then they caught a break. The Broncos conducted countless mock drafts. In how many were Chubb available?

"Zero," Elway said. "We were thrilled he was there. He has a motor. He's all football. He's a leaders. He's going to fit for us."

Chubb made the ESPN rounds last week. He pitched suits and Old Spice. He was confident he would go in the Top 5, but not necessarily to the Broncos.

"I had my phone at the table and saw a Denver number pop up and I said 'This is it,'^" Chubb said. "It was surprising to see I was going to Denver because I only met with them once (at the combine). I definitely plan to come in and contribute right away. I see myself fitting right in with Von (Miller) and Shane (Ray). I am looking forward to to this opportunity."

Chubb is considered an elite prospect, measuring 6-foot-4, 269 pounds with a relentless motor and breathtaking speed. He is so disruptive he profiled as the No. 1 overall selection in most drafts.

The drama leading to the selection became intoxicating. The Broncos considered moving up to take Darnold, then pieced together the framework for a deal with Buffalo. With Chubb on the board, everything changed.

Chubb netted 10 sacks and 26 tackles for a loss last year. He gives the Broncos nasty potential when paired with veteran pass rushers. Chubb played in a 4-3 in college. However, he remains convinced he can transition to a 3-4 scheme, shifting inside to tackle and outside to end when needed.

"Yes, if you watch the film from last year I did it a lot," said Chubb, who will hold a press conference at Dove Valley at 2:30 p.m. on Friday. "I stood up a lot and I was in three-point stance a lot. I’m used to both things."

Elway sees no issue with Chubb transitioning to a different scheme. The 3-4 looks more like a 4-3 in situational football.

"We talk about fit. Over half the snaps are in nickel," Elway said. "We are talking about base defenses changing quite a bit in the NFL."

Veteran players wanted a starter, not another quarterback. Recently, Miller praised Chubb, making it clear he was his No. 1 choice.

"He’s (Raiders) Khalil Mack and Von Miller put together (laughing). He is a great player. I would love to have him on my team. You don’t come across guys like that often," Miller said. "Having the No. 5 pick in the draft, I hope we don’t have a high pick like that for a while. If we could steal a player like that, I’m all for it.”

The Broncos preferred two quarterbacks in this draft: Baker Mayfield and Darnold. Mayfield went first to the Browns. In the end, a trade with the Giants fizzled, not a surprise given the acquisition price. New York stayed put, taking Penn State running back Saquon Barkley. Darnold then became a surprise prize for the Jets with the third overall pick. The Chubbawamba dance began.

"Great pickup. Definitely a guy that can come in and help right away," defensive end Derek Wolfe said.

The Broncos also own a pick in the second round, the 40th overall. There remains a chance they will move up in the first round to land an offensive guard. Plenty of interesting names remain: runningbacks Nick Chubb, Ronald Jones, and Derrius Guice; CU cornerback CB Isaiah Oliver, tight end Dallas Goedert and, of course, UTEP guard Will Hernandez.

Denver has multiple needs to address. Tough choices sit on the horizon. Chubb was an easy pick.