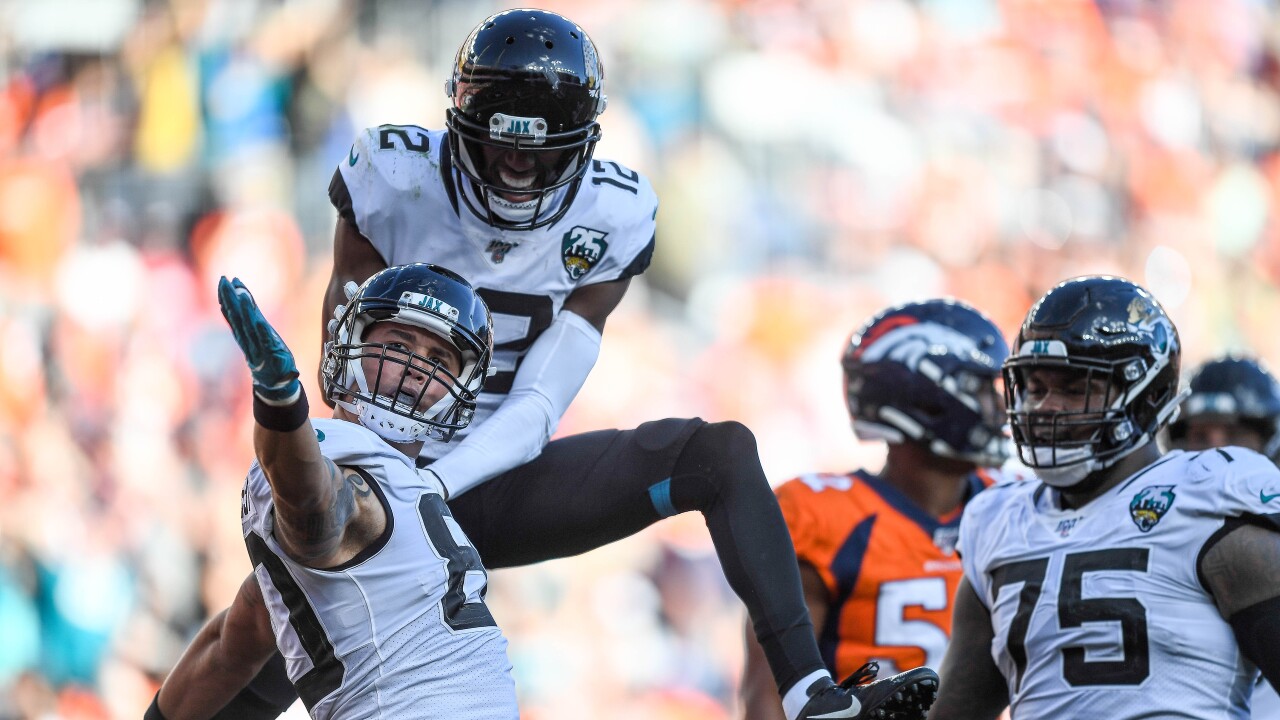 DENVER — Von Miller stood in an empty locker room Sunday, slowly pulling on his black shirt, and placing a black cowboy hat atop his head. He spent last week as the unlikely villain after a 12-second press conference that featured a statement and no questions.

On Friday, he sat on at his locker strolling through his social media as Garett Bolles joked, "Everybody hates you." Without pausing, Miller said, "Not quarterbacks."

Miller returned to creating havoc, but he and his team remain in a swirl of ineptitude after a loss that was easier to witness than explain. The Broncos led the Jaguars -- nobody's idea of a contender -- by 14 points in the first half. They led by one point with 1:32 remaining. One third quarter drive or a final fourth quarter stop, and the Broncos would have celebrated their first victory. Instead, they are strapped with the indignity of a winless start, falling 26-24 to Jacksonville on a Josh Lambo field goal as time expired.

Remember the Chicago loss two weeks ago? This was worse. The Broncos deserved to win this game, and instead they remain a do-it-yourself project that remains unfinished, tools and parts scattered like so many pieces of a broken heart.

"This is something that will either make us or break us as a team," Wolfe told me as he slumped at his locker, struggling to wrap his head around the team's eight-game losing streak dating to last season. "You either stick together or everybody separates and becomes an individual and does what's best for themselves. That's when football is not fun anymore. Adversity can bring you together or break you. So we have to use it as a positive otherwise we are in for another (crap) season."

Only one team -- the 1992 Chargers -- has made the playoffs after an 0-4 launch. But the postseason, frankly, is an unrealistic goal for a team in transition. This is about a club finding its traction and improving over the final 12 weeks to restore hope in a new leader. Vic Fangio waited four decades to become a head coach. It feels like he's waiting as long for his first win. He's not naive. It his hard to keep a team's confidence without results.

"I still believe in them," Fangio said. "I think they are winners as individuals. We have to find a way to be winners as a team, and we we're not playing well enough consistently to do that. I am sure it it harder for players to believe because it is a bottom-line business and our bottom-line is not very good right now."

The blunt truth is the Broncos find ways to lose. It doesn't mean they don't do things that represent progress, but it feels hollow when a team can't close. On a day when the offense exploded for 17 first half points, the same group disappeared from late in the second quarter until the final drive. A Joe Flacco pick right before halftime provided Jacksonville an oxygen mask, injected them with hope before their magical rookie quarterback Gardner Minshew could pull a victory out of the thin air.

"I have people in my life that look up to me. These are experiences that you can teach them in," said Flacco, who completed 22 of 38 passes for 303 yards and three touchdowns. "It's tough to get in front of the team and tell them that when the everybody is hurting as much as they are. But that's the bottom-line, man. if you consider yourself a tough NFL player, then damn, look yourself in the mirror, pick yourself up and get ready to go back to work."

For long stretches, it appeared the sobering reality of lost season dissolving was going to change. The Broncos played well in the first half. And they regained the lead in the waning minutes. Trailing by six, the Broncos took over with 2:54 remaining. Two Flacco completions left them at the 25-yard line with 2 minutes remaining. Moments later, Flacco connected with Courtland Sutton on an 8-yard touchdown pass as the Broncos regained a 24-23 lead with 1:32 left.

The Broncos had starred in this movie before. Against Chicago. It didn't end well. This offered the defense a chance at redemption. Instead, the Broncos followed the same script off the cliff. Stop me if you've heard this before -- the drive started with a roughing the passer penalty. Miller, who starred with two sacks and was a disruptive force, attempted to swat the ball out of Gardner Minshew's hand and hit him in the face. Miller did not object to the penalty, saying the refs have a difficult job. The Minshow became straight Hollywood. He connected on a 32-yarder, and soon after Lambo was piercing the wind and splitting the uprights with a 33-yard field goal as time expired.

"We have great coaches, some of the best of my career. We have talent on both sides of the ball. We have to stick together and become closer. We play professional football," said Miller, who became the sixth fastest player in NFL history to reach 100 sacks with his pair on Sunday. "There's no running from it. Or having second thoughts. The only way out is up."

The Broncos are 0-4 and have not won since Dec. 2. Sunday offered a Cliff Notes version of their ineptitude as Leonard Fournette posted 225 yards on 29 carries. He had 439 yards last season. Wolfe called the rushing yards "embarrassing." And safety Justin Simmons admitted, "it was up to us to get a stop and we didn't get it done."

Needing adequacy, the Broncos responded with their worst quarter of the season in the third, outgained in yardage 195-8. It all began with a harmless tug of the loose thread and the jersey unraveled. Flacco, playing his best game as a Bronco, threw an inexplicable interception with 1:05 remaining in the second.

"It was my fault," said Flacco, who caught intended receiver Emmanuel Sanders late out of his eye and sailed the throw. "My eyes messed with me."

Added Minshew, who completed 19 of 33 passes for 213 yards and two sores, "I think we just weren't going to freak out at halftime. We were down 11, got some points right before the half. That was huge."

The Jaguars scored 17 unanswered points to fuel the upset. If not now, then when? That was the question I raised before the game. Looking at the Broncos' schedule, it is increasingly hard to find a victory. They were left to take solace in statistics that spared them deeper pain.

No longer is their defense lonelier than one sock. Miller notched the team's first sack, slamming into Minshew on first-and-10 from the 31-yard line with 2:13 remaining in the first quarter. Then, the Broncos scored a touchdown -- hello rookie tight end Noah Fant -- in the opening period for the first time this season.

The first half promise did little to soothe lingering wounds of a second-half collapse.

"We can be down, we can be sad," safety Will Parks said. "But I still believe we can turn it around."

Winning for Denver means bucking trends. Being the NFL's worst first-quarter team is no way to live. The Broncos showed progress with imagination and execution. Denver captured a first-quarter lead -- of all this team's issues, playing from behind ranks near the top -- with a two-play blink of a drive. Following a 28-yard scamper by Phillip Lindsay, Flacco found Fant in the middle field for an easy dash into the end zone. Fant celebrated his first score by firing the ball into the dirt, and jumping into the stands. The pent up frustration needed a release.

After a Jacksonville field goal, the Broncos answered with a nine-play, 69-yard jaunt. After Emmanuel Sanders, a frequent first-half target, moved the Broncos to the 7-yard line with a 39-yard reception, Flacco went to work. He showed off his fastball, zipping a dart to Sutton for the score. The half included a sack from Bradley Chubb, whose motor was revving at redline capacity, and a Brandon McManus 33-yard field goal.

The Flacco blemish then surfaced, setting up a second-half of fingernail biting and stomach-churning. Each moment afterward amplified the mistake's importance.

Simply put, the Broncos returned from the locker room and delivered their worst stanza of the season. The scoreboard reflected the physical mauling.

The defense privately lamented chasing opponents. But given an advantage, the group showed elasticity before snapping. The Jaguars, staggering, regrouped with their most impressive drive of the season to start the second half. It soaked 10 minutes, 24 seconds off the clock, and finished with magic. Minshew showed comfort in the chaos, eluding the rush -- no small feat after being sacked four times by this point -- and connecting with Ryquell Armstead on a 7-yard score with 4:36 remaining in the third. Suddenly, anxiety replaced joy among the 71,954 fans in attendance.

Just when it looked like it couldn't get worse, Fournette punished the Broncos with an 81-yard burst as he ran through Will Parks and carried Duke Dawson toward the end zone. Fournette had not eclipsed 66 yards in any of the first three games, grousing about the run game's clumsy nature. The Minshow played out in all its glory with a misdirection touchdown pass to tight end James O'Shaughnessy. Jacksonville owned a 20-17 lead entering the fourth.

The waning minutes illustrated how much has changed since the Broncos won Super Bowl 50. When the Broncos secured a one-point lead late in the fourth, several fans in the south stands could be heard lamenting that Denver left too much time for the Jaguars to operate. They were right. The Broncos have no margin for error. As of the result, they have no wins, stuck in an abyss that offers flickers of hope before fading to black.

"The offense did enough for us to win. Defense, we have to find a way to close a game out. That's the second time that has happened to us," Miller said. "There's really no time for us to feel sorry for ourselves. We have to take a long look in the mirror, which I always do. That's the answer to all of our problems."

Footnotes
Broncos linebacker Bradley Chubb left in the fourth quarter with cramps in his calf that bothered him much of the second half. ... The free agent boom has yet to give the Broncos an anticipated bump. Their top three free agents have made little impact. Safety Kareem Jackson joined the group Sunday with a hamstring injury. He did a pregame workout to test his leg, but landed on the inactive list. Right tackle Ja'Wuan James has played 10 snaps this season, injuring his left knee at Oakland. He did agility drills with a brace on in pregame, leaving optimism he will return in the next two weeks. Cornerback Bryce Callahan has not played a down this season, and is out 4-6 adiitional weeks after undergoing a procedure on the foot. ... Jackson told Denver7 after the game he anticipates playing against the Chargers. .... With Jackson and Callahan out, cornerback Duke Dawson received additional reps in the nickel package. He was beaten on the last drive in coverage. ... Linebacker Josey Jewell left in the first half with a hamstring injury, something that has plagued him the last two weeks. ... His replacement Corey Nelson missed a few snaps after getting poked in the eye, but returned. ... Malik Reed registered his first career sack early in the fourth quarter. ... Phillip Lindsay, who rushed for 53 yards on nine carries, on the loss, "It's very tough. We are a team. Those are your brothers out there. Everybody has a job to do and needs to do their job." ... Receiver Emmanuel Sanders (five catches, 104 yards) said the offense deserves blame for quick possessions in the wasted third quarter. "The defense got tired."