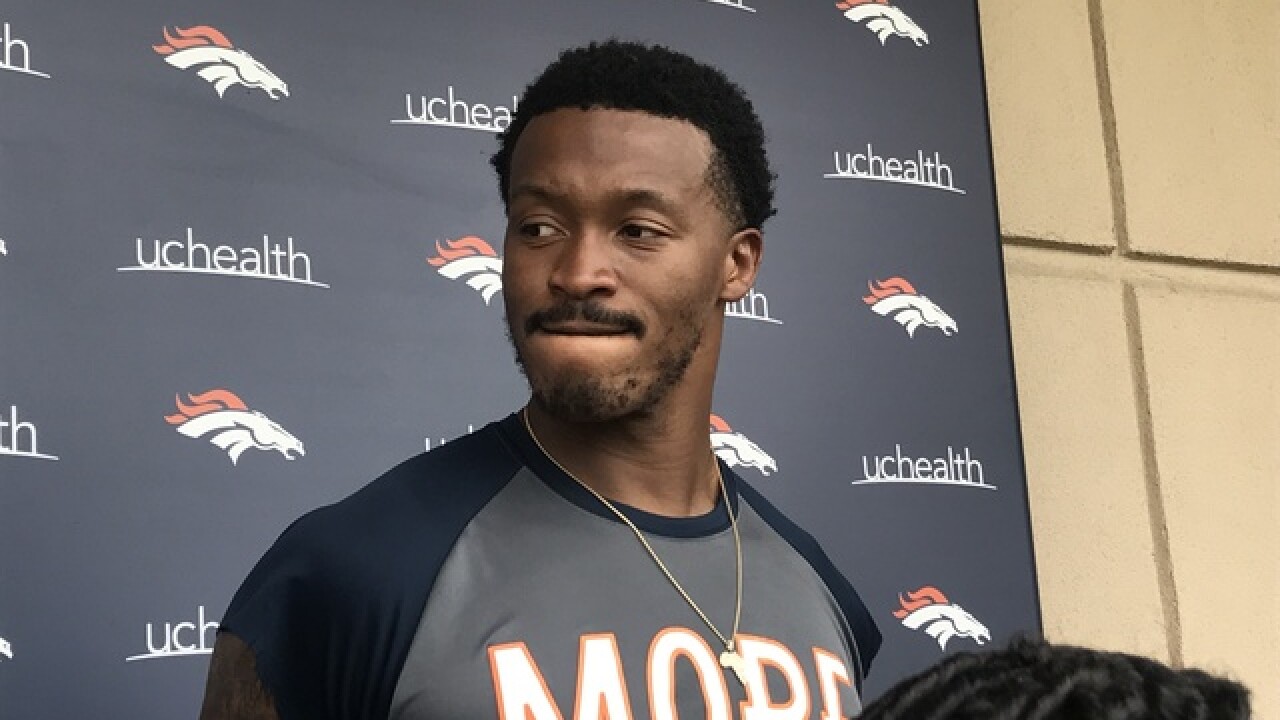 CENTENNIAL, Colo. -- Demaryius Thomas stepped to the podium Tuesday and drew stares. He has always been a big deal in Denver. But now he's a bigger deal, literally. After integrating a vegan diet to drop to 214 pounds last year, Thomas weighs 220. He is looking to play a tick heavier as he looks to rebound with a "1,200-yard" season.

Thomas watched his production decline the past four seasons -- yards per season, yards per catch -- due to a confluence of factors. He dealt with a nagging hip injury that compromised his burst at the beginning of routes, and never found a rhythm with the carousel of quarterbacks the past three years.

"What diet?" Thomas asked when I wondered if he had eschewed the vegan route. "Physically, I can say I’ve felt my best since I’ve been in the league. I have been dealing with hip problems my whole career. Now it really doesn’t bother me anymore. So physically I feel the best, mentally as well. I’m all love and ready to keep moving. Ready to get in the playoffs and things, and get back to a championship."

Since becoming a starter in 2012, Thomas posted career lows in yards (949) and yards per catch (11.4). He appeared more of a possession receiver. The arrival of Case Keenum and a pair of rookie receivers -- Courtland Sutton and DaeSean Hamilton -- has energized Thomas. No more worrying about who stands in the huddle from game-to-game and play-to-play.

"The first thing is that Case takes control of everything. Not just offense but the whole group," Thomas said. "He takes control of the huddle. I know that I was in the huddle one day and I said, ‘Wait, wait, wait. We’re missing…’ and he said, ‘I got this.’ and I said, ‘OK.’ So, it’s stuff like that. It’s good to have him around. I have work to do. But I finally got a connection on the deep ball, which is big for us.”

The Broncos will attempt to accelerate the learning curve. Case in point, the return of a full-fledged passing camp. Mark Sanchez staged one two springs ago, but it fizzled when he lost the starting job in training camp. Keenum and receiver Emmanuel Sanders plan to host an event in Houston, where both reside. After the Broncos offense slumped to 18 points per game last season, it can't hurt.

"It’s going to be the receivers, quarterbacks, and hopefully we can get some tight ends and running backs as well," Thomas said. "So we’re trying to figure out where we’re going to throw this summer."

For the first month of the offseason, speculation centered around the potential exit of Thomas and Sanders. The Broncos picked up Thomas' contract option, and general manager John Elway made clear at the NFL combine he was moving forward with the pair. However, he seeks improvement. Coach Vance Joseph believes Thomas has a finishing kick left.

"He wants to work. He’s always in great shape. He’s eating right, he’s taking care of his body and the older he’s gotten, the more involved he’s gotten with taking care of his body. He looked great out there," Joseph said. "Obviously, having Case, that brings new life to a receiver. He’s been in an offense where they’ve had two years of quarterback battles. For a receiver, they don’t like that stuff. They want one guy and they want the timing to be right. He is really excited about Case. Again, when he’s healthy and he’s rolling, he’s hard to defend.”

Broncos All-Pro linebacker Von Miller appreciates hard work. He recognizes its role in a season, especially regarding conditioning. But he couldn't help going a little Allen Iverson when asked about OTAs on Tuesday. The reality is that what happens in May only means something if it translates in September.

“I mean its OTAs. You really can’t put too much into OTAs. Last year in OTAs I thought we were going to win the Super Bowl. You really can’t put too much into it. I like our grind, I like our work and I like the way we come up here every day. It feels different. You really just can’t put too much into OTAs," Miller said, adding, "Don’t get hurt out here. Every year you see guys get hurt. I mean you’re really no good if you get hurt. That’s some of the stuff that I tell guys. I know we’re all kind out here brainwashed, out yelling this: ‘Go hard!’ But at the end of the day, we don’t have pads on. I would rather guys not practice in OTAs or training camp, but play in the season (laughter) because that’s where we really need the guys."