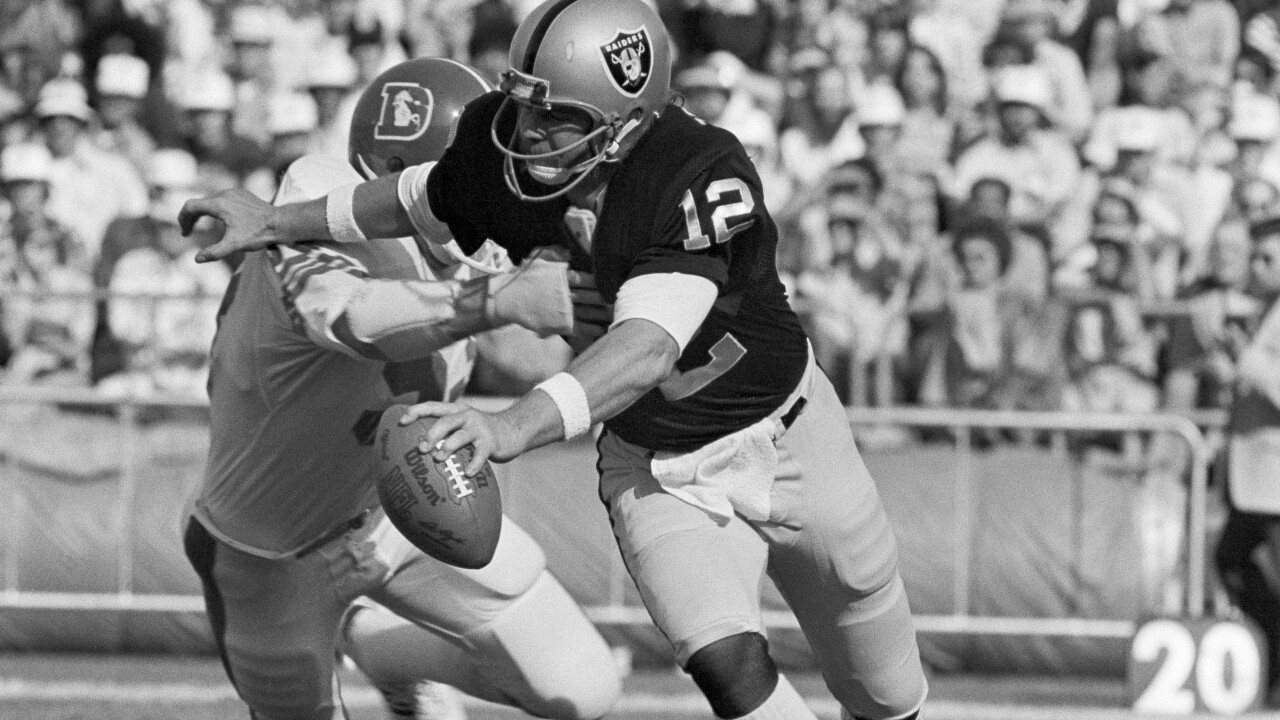 (Copyright 2020 The Associated Press. All rights reserved. This material may not be published, broadcast, rewritten or redistributed.)
Jim Palmer/AP
Oakland Raiders quarterback Ken Stabler looks for room under pressure from Denver Broncos linebacker Randy Gradishar during first quarter action, Oct. 31, 1976 at the Oakland Coliseum. Stabler was sacked for an eight yard loss on the play. (AP Photo/Jim Palmer)

DENVER -- Before John Elway helicoptered the Packers, before Rod Smith raced by the Falcons, before Von Miller devoured Cam Newton, there were the 1977 Denver Broncos.

They did not win a Super Bowl, falling to the Dallas Cowboys, but they provided a watershed moment in the franchise's history. Simply put, that Broncos team put Colorado on the map by eclipsing the Oakland Raiders in the AFC Championship game. Four decades later, this group remains remembered for its Orange Crush defense. No one symbolized the unit's excellence more than linebacker Randy Gradishar.

Wednesday, Gradishar finds out if he is elected to the Pro Football Hall of Fame, his chances decent as one of 20 senior finalists in the Centennial Class honoring the NFL's 100th season. The announcements begin at 5 a.m. local time.

Gradishar failed to make it to Canton as a modern-era candidate, but momentum is growing for him to earn induction as a senior member. His statistics suggest his wardrobe should have long ago included a yellow jacket. Gradishar earned All-Pro honors six times, made seven Pro Bowls, was voted Defensive Player of the Year in 1978 and posted five seasons with at least 200 tackles.

"He was the best linebacker of his generation. Like they always said about Joe DiMaggio, (Gradishar) made it look so easy," said legendary Broncos media relations guru Jim Saccomano. "(Teammate) Tom Jackson told me one time, 'What people don't understand is Randy is actually that good. He was really that good."

In defensive coordinator Joe Collier's 3-4 defense, Gradishar wrote a diary of havoc. In the 1997 season, he intercepted three passes and forced four fumbles. He earned a reputation for making his biggest plays on third-and-1 and fourth-and-1 stops. On Oct. 11, 1981, he produced one of his signature moments, springing into the air to collide with leaping Detroit running back Billy Sims, causing a fumble. As Andrew Mason of DNVR pointed out, Gradishar is one of 10 linebackers in NFL history with 10 fumble recoveries, 20 interceptions and seven Pro Bowl berths. The other nine are in the Hall of Fame.

"He was maybe the smartest and most underrated. Had rare instincts, was faster than Lambert and very effective in short-yardage and goal-line situations," Buschbaum said. "The fact he is not in the Hall of Fame is a shame and may be attributed to the fact he was a sure tackler but not a lights-out hitter or look-at-me-type of player.”

The lack of respect grates at Broncos fans. Those who have followed the Broncos for decades remember his greatness. But entrance into Canton, long overdue, would make certain he is never forgotten.