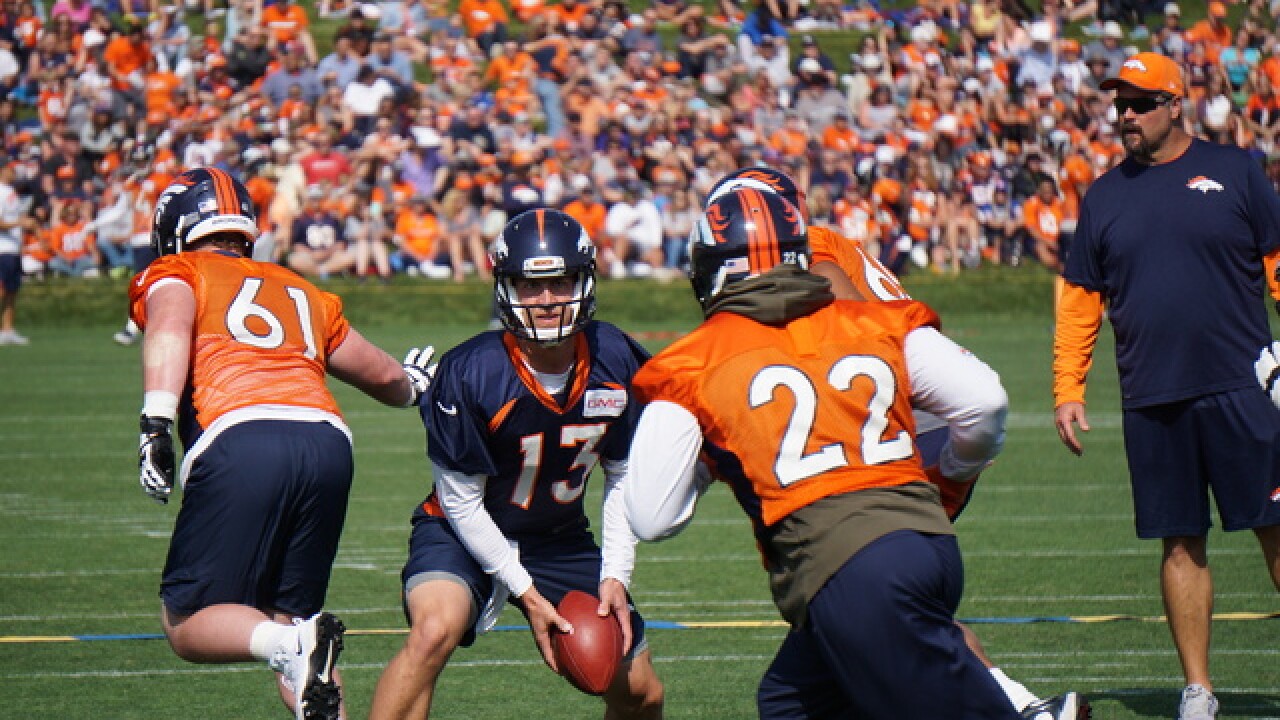 The Broncos quarterbacks face their biggest test to date in the preseason opener Thursday at Chicago. Trevor Siemian will start, followed by Paxton Lynch. They will receive roughly 16 plays -- a quarter to a quarter and a half -- to state their initial case. Games matter, coach Vance Joseph reminded the media Tuesday. So while Siemian sits firmly in the lead -- my observation -- after becoming admittedly more comfortable with the offense a week ago, he has not secured the position. Lynch trails, but has not lost the job either, though time is shrinking for him to make a push.

"I am focusing on my job, moving offense, and putting points on the board," Siemian said. "I just look at as I am just glad we are not playing our guys. I don't think (there's more pressure this year). They haven't fired me yet, so I think I am all right."

As the playbook has grown and pads have gone on, Siemian became more comfortable. He admitted he has a better read on the personnel and how the scheme fits in the big picture. The Broncos will play the match up game each week, as is common in the NFL, but offensive coordinator Mike McCoy wants an uptempo, explosive attack. Those are words I never wrote in the same sentence as the Broncos' offense last year.

That means McCoy seeks multiple big plays in excess of 15 yards in the passing game and 10-to-12 yards on the ground.

The quarterbacks have been advised to "let it go in the game." The coaches want aggression that makes the defense uncomfortable. For Lynch, this represents a time for his athleticism to show out. If he shows up enough off script, perhaps an argument could be advanced to tailor a playbook to his strengths. But improvement is necessary after falling behind.

"I have always felt that games are a time to show what you have learned in practice. I think it will be good for us as a group a whole. The big thing for me is moving the ball up and down the field," Lynch said. "I can't make it about me. It's about the how the offense does."

The Broncos provided an in interesting wrinkle this week. They began game planning for the Bears on Tuesday. It is designed to give the players a "chance to be successful." Joseph said they will not "rescue players with scheme," but game planning eliminates surprises, creating a better platform to make decisions on the 15 or so available roster spots.

McCoy showed enthusiasm for the opener. He has a firm idea of what he wants his offense to look like.

"We are still putting everything together. As an offense, we want to do whatever it takes. I want to move up and down the field. I am not looking at having to run a certain percentage or a pass a certain percentage. I want to have an explosive offense," McCoy said. "The thing that is going to allow us to have explosive runs is the receivers. The commitment they have to blocking. We want to score as many points as fast as we can. We want to have an exciting offense for our fans and score a ton of points."

For now, the plan is for Von Miller to play Thursday. No one would blame the Broncos if they place the MVP candidate in bubble wrap. Joseph wants his defensive to play a minimum of one series -- "if it's dominant" -- and a maximum of three series. Safety T.J. Ward and linebacker Todd Davis will not participate because of injuries. Will Parks and Corey Nelson are scheduled to start in their place.

Joseph realizes this is not your father's NFL. There are no two-a-days in pads or Oklahoma drills. Player safety and health matters have evolved. It's an even playing field across the league. "It's fair. I want to see in the game who can block, catch the ball and run the ball. And I want to see who can get off blocks and cover. We have given them enough of a game plan so that they can play well." ... Rookie DeMarcus Walker will play at outside linebacker in the game. He moved there to give the Broncos depth following the injuries to Shaquil Barrett (hip) and Shane Ray (wrist). ... Special teams coach Brock Olivo admitted Miller could "return a punt in a game if he had to. I don't think there's anything he can't do on the football field." Olivo said Miller working with the special teamers shows leadership and boosts team morale. ... Four running backs will play Thursday. Jamaal Charles will not be among them. He received an arduous workout on Tuesday and is expected to make his preseason debut against the 49ers. He has to show he's healthy to make the team. The four running backs who will see time vs. Chicago are: Anderson, De'Angelo Henderson, Stevan Ridley and Juwan Thompson. ... Cody Latimer will start on kick return.