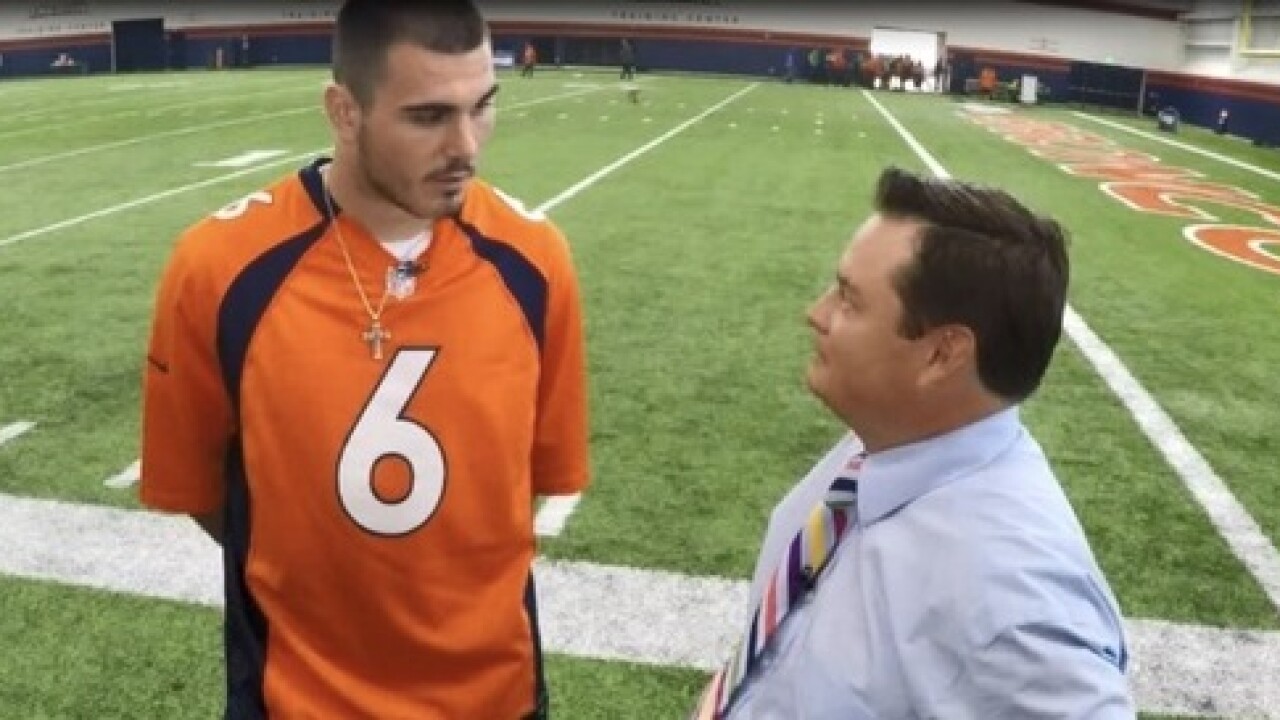 CENTENNIAL, Colo. -- In the 2017 draft, the Broncos piqued the interest of fans when they made quarterback Chad Kelly the last pick overall. The idea of Kelly as Mr. Irrelevant struck as a contradiction. Kelly has been known forever. First, for his athletic prowess. Later for his relation to uncle Jim, a Hall of Famer. And finally, for all the wrong reasons.

Kelly, a top prep prospect, produced a star-crossed college career. Clemson kicked him off the team in 2014 for arguing with coaches during a spring game. He was arrested for a bar fight and later involved in a brawl at his brother's high school game after a late hit.

Kelly's issues and injuries plunged his draft stock. General manager John Elway drafted Kelly based on Jim's recommendation. Kelly said all the right things at the Senior Bowl. Given a life raft, the time arrived to walk it like he talked it.

As difficult as draft weekend was, Kelly believes his redshirt season could be the best thing that ever happened to him. He sits in a competition for the backup spot with former first-round pick Paxton Lynch.

"I don’t think there really is one key. I think the key is to get better every day, whether you are first-string, second-string, third-string or practice squad. It's about finding one thing you can work on everyday to get better," Kelly told Denver7 in an exclusive interview Tuesday. "If you are doing that every day,  and not repeating your mistakes, then you will improve. And I need to be consistent in what I am doing."

Perception can become reality for rookies. And when Kelly arrived a year ago with his belly protruding from his No. 6 jersey, it caused alarm. True, he was rehabbing from knee and wrist injuries. However, without discipline in his recovery, how could be viewed as a threat to anyone on the depth chart? Kelly took advice seriously. He dropped from 236 pounds to his current 210. He looks the part as he attempts to land a significant role behind veteran Case Keenum.

"Last year I was able to develop my game, whether in the run game, the pass game, the protections, finding out how a real NFL offense is supposed to run and the mechanics and communication that go with it. It was definitely an advantage to be able to sit back and watch it unfold," Kelly said. "I was able to take care of my body and get back into the best playing shape so I could be ready to compete at a high level. You have to eat clean. You can’t stay up late. You have to make sure you have your greens always, and you need a specific regimen if you want your body working at a high level. I really took pride in feeling great again in my mind and body."

Coach Vance Joseph welcomed the addition of Kelly during the draft. He viewed the Ole Miss quarterback as the best prospect. He, too, has seen Kelly mature over the past 13 months. Watching Kelly interact with Special Olympic athletes during Tuesday's Play 60 event at the Pat Bowlen Fieldhouse, Kelly's joy was palpable.

"I’ve been proud of Chad overall. He’s been here every day, and he’s worked his butt off. You mentioned it, he’s changed his body. Last year he was a little tubby kid. He’s really lean now, he’s eating right, he’s working hard," Joseph said after Kelly worked with the rookies last weekend. "He’s definitely put the work in and he’s throwing the ball really well right now.  He’s been good for our new guys.”

It's easy to forget how good Kelly was before he became sidetracked. He eclipsed 4,000 yards as a junior, and was topping the SEC with 2,578 passing yards when he tore the ACL and meniscus in his right knee in his final season.

His became a journey interrupted. Kelly grew up watching Buffalo Bills games from the sidelines. While a fierce competitor in basketball, lacrosse and snow skiing, he zeroed in on the NFL as his dream.

Kelly made his path to the pros more challenging by making mistakes.

Those missteps, those failures, he believes, have prepared him for future success.

"Every kid goes through hard times. I had the strength to overcome it and get where I wanted to be. You know college didn't end exactly the way I wanted it to end," Kelly said. "I am where I want to be now. God works in mysterious ways. I am excited about this opportunity in front of me, and thankful for what happened before."