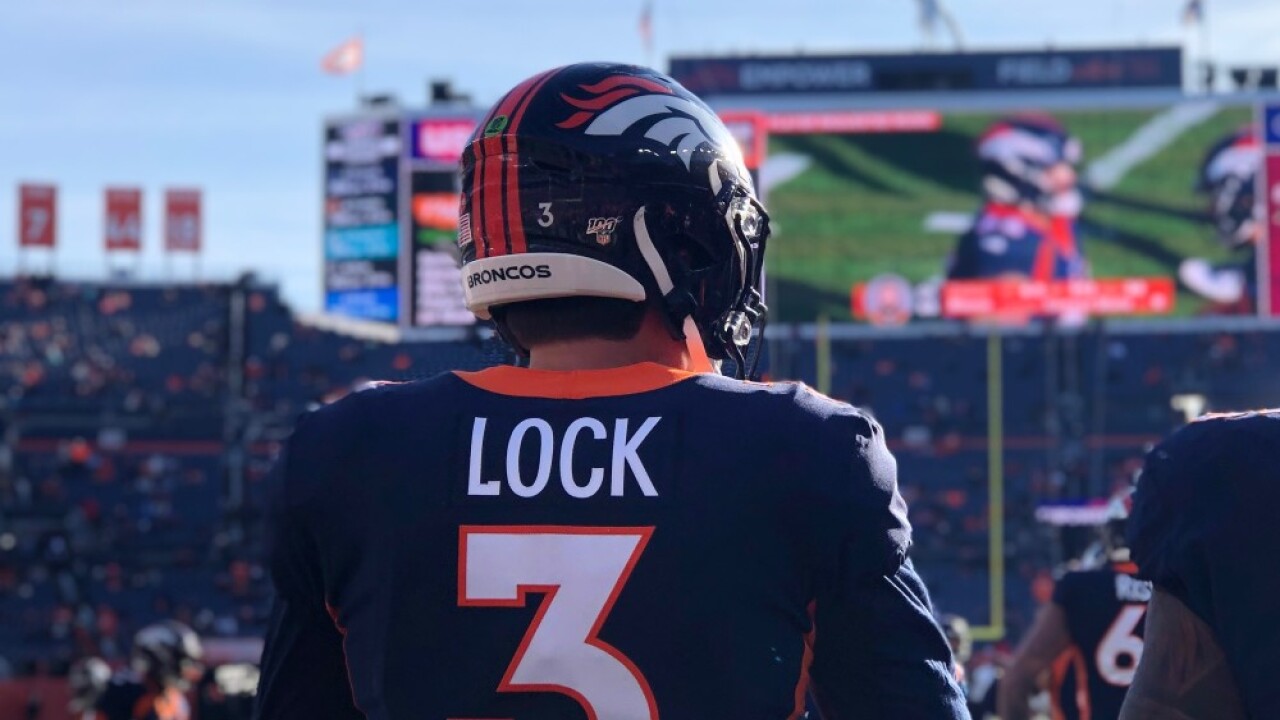 ENGLEWOOD, Colo. — At the professional level, a player must believe in himself for teammates to believe in him. Yet, the standard remains performance. Don't talk about it, be about it. Through three games, Lock has shown promising potential. Can he finish strong -- win out at home -- to show he's the guy going forward, finally putting the brakes on the spinning carousel at the league's most important position?

I asked him about it on Wednesday.

"There's always that thought process. If I am doing that, it's just to prove it to the guys on the field around me. I a confident and feel like I am the guy for the job," Lock said. "But that's not just sitting there in my head. My biggest goal is to win this game, be ready and know my game plan and see how it turns out on Sunday."

Lock brings swag but recognizes the need to strike a balance between taking chances and taking care of the ball. Everyone likes the quarterback who plays fearless, but the league has become turnover averse. Can't lose money if making a profit, remember? As Lock settles into his role, he is gaining an understanding of resisting temptations on the field.

"The three picks I have thrown, I have definitely learned something from each of them. That one (against Kansas City) is an easy one. Scramble for five yards and get out of bounds and stop the clock instead of trying to get it all back in one play. That was the biggest thing," Lock said. "We have time in the fourth quarter. We don't need it all back right now. Figure out how to actually get the score instead of trying the risky play that turned out bad. That's what happened. But if I get in that situation again, I will handle it differently."

This answer illustrates why Lock can be the answer, why he can bring stability to the position as the seventh starter since Peyton Manning. He knows who he is and how he must shape himself to his NFL job. He revealed as much when asked to describe what being a gunslinger means to him.

"It's kind of like being a three-point shooter starting off the game 0-for-5, but I am definitely going to shoot the sixth one," said Lock, who has thrown for 651 yards, five touchdowns and three interceptions in three starts. "I am going to throw a couple of picks here and there, but in my heart and in my gut, I know those picks will turn into touchdowns, and the good plays will outweigh the bad if you do it correctly."

To a man, the Broncos are viewing the final two weeks through a narrow lens. They want to win — that simple. Establishing an identity and reclaiming prowess at home is appealing. But these last two weeks are about development. Lock improving would be a comforting place to enter the offseason.

"I feel like Drew has already done things to show that he's the guy. We need to finish these last two games strong. I have all confidence and faith that he's going to put himself in position to be successful," 1,000-yard receiver Courtland Sutton said. "I do think Drew will be prepared and solidifies that spot so that there aren't any questions. That would ease his mind going into the offseason, so he doesn't have to worry about any of that extra stuff."

Footnotes
Right guard Ron Leary (concussion) and right tackle Ja'Wuan James (left knee) are not expected to play this week. ... With Kareem Jackson suspended, Trey Marshall will start in his place. ... Broncos Phillip Lindsay on Lock: "’Drew's doing a hell of a job and it’s only, what, his third game? This one’s going to be his fourth. It’s about seeing him grow, what he does better this game here than the last game. He has confidence and he’s going to continue to have confidence. They’re going to continue to help him out. You need to be able to do this with this kid. He’s doing a good job.”