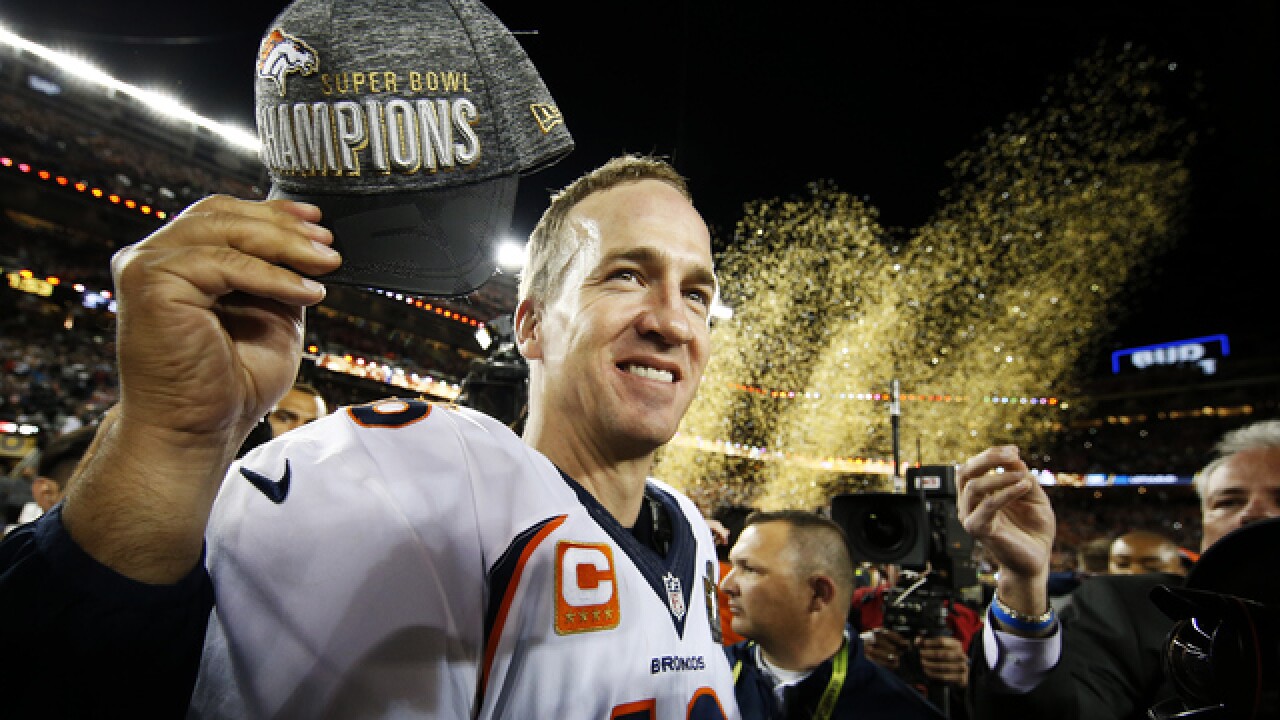 Linebacker Brandon Marshall was the first on Twitter to retweet the news.

Then running back CJ Anderson tweeted:

Man thank you P thank you 4 all the memories I love you man believe me I have a friend 4 life. A 9 year old fan to a teammate P G.O.A.T

But what a great leader and teammate

Congrats to my man PM on an amazing career. It was an honor to play with one of the greatest & to win it all with him.

Outside linebacker Von Miller said thank you on Instagram.

Thanks Peyton "Pmoney, Papa John, Master P"!!! You showed us what greatness looks like! Thru all the adversity, you stayed consistent in your quest for greatness! The task was never too big, or too small for The Sheriff! I love you, and appreciate everything for have done for me personally and the organization! "You're the REAL MVP"!!! #sb50 champions #peytonmanning

Congrats Peyton, you played the QB position & game to perfection. Showed generations, including my boys, how to be a pro. Enjoy retirement!

Yes I kept the ball! Thanks again Peyton. Chicken Parm you taste so Good!

A photo posted by Mitchell Unrein (@mrunrein96) on

Wide Receiver Jordan Wood also took to Instagram, posting a photo of Manning and him interacting on the field.

Honored to have played and got a ring with the GOAT!! Blessings to you P!

A photo posted by Jordan Norwood (@jordanorwood) on

Safety David Bruton Jr. said, "Honor and a privilege to not only play along side of #PeytonManning, but to also lead the team with him."

Honor and a privilege to not only play along side of #PeytonManning, but to also lead the team with him. He is definitely a true leader in the locker room and on the field. I cannot say enough good things about him, but I do not need to, let his accolades speak for themselves. Peyton, you had one heck of a career and many more blessings are coming your way. #Congrats #BeBlessed

A photo posted by David Bruton Jr. (@d_brutjr30) on

Wide Receiver Bennie Fowler tweeted with a shoutout to the Sheriff:

So it's official I caught p money's last pass wow what a blessing shoutout to the sheriff on a great career !

Peyton was everything we thought he was and even more - for our team & community. What an AMAZING career & we're thankful he was a Bronco!!

Cornerback Keyvon Webster said he was thankful to have been around the Sheriff during his first years in the league.

Thankful to have been around The Sheriff my first few years in league ! LEGEND Blessings #greattimes #BroncosUp

A photo posted by Kayvon Webster (@kw3bb6) on

Safety Omar C. Bolden said it was an honor and a privilege to get to know Peyton.

It was a honor and a privilege PM, s/o to you, the #GOAT on 1 hell of a career! ?? #SB50Champs #BroncosCountry #GoingOutOnTopLikeAReal1 #PositiveLiving

A photo posted by Omar Bolden (@os_island) on

Congrats To PM on retiring . PM was the ultimate Team player and Great friend glad to see him go out on top .

A photo posted by Chris Harris Jr (@chrisharrisjr) on

It was an honor playing with P money. God bless you and your family! And blessings on your future endeavors! https://t.co/dClJUjhsQw

It was an honor to be ur teammate "p-money" congrats on ur successful career, thanks for teaching me how to be a pro pic.twitter.com/K52tE8H72M

Nothing's better than watching the Sheriff go out on top! It's been an honor P! God Bless ??

Grateful for the chance to play with quite possibly the best QB of all time. Well done Peyton. Enjoy the golf course.

Nose tackle Sylvester Williams said he was "blessed" to have played alongside Peyton:

I've been blessed to play with one of the best of all time Peyton and win a Super Bowl! Thanks got the everything PM!

Sheriff G.O.A.T & The LionBacker...it's truly been an honor PM. Enjoy it and save me like 1 or 2 cold ones lol #GR8 pic.twitter.com/9TrdbrJTOo

Outside linebacker Von Miller said Manning "showed us what greatness looks like!"

Thanks Peyton "Pmoney, Papa John, Master P"!!! You showed us what greatness looks like! Thru all… https://t.co/kloDBg8zj4