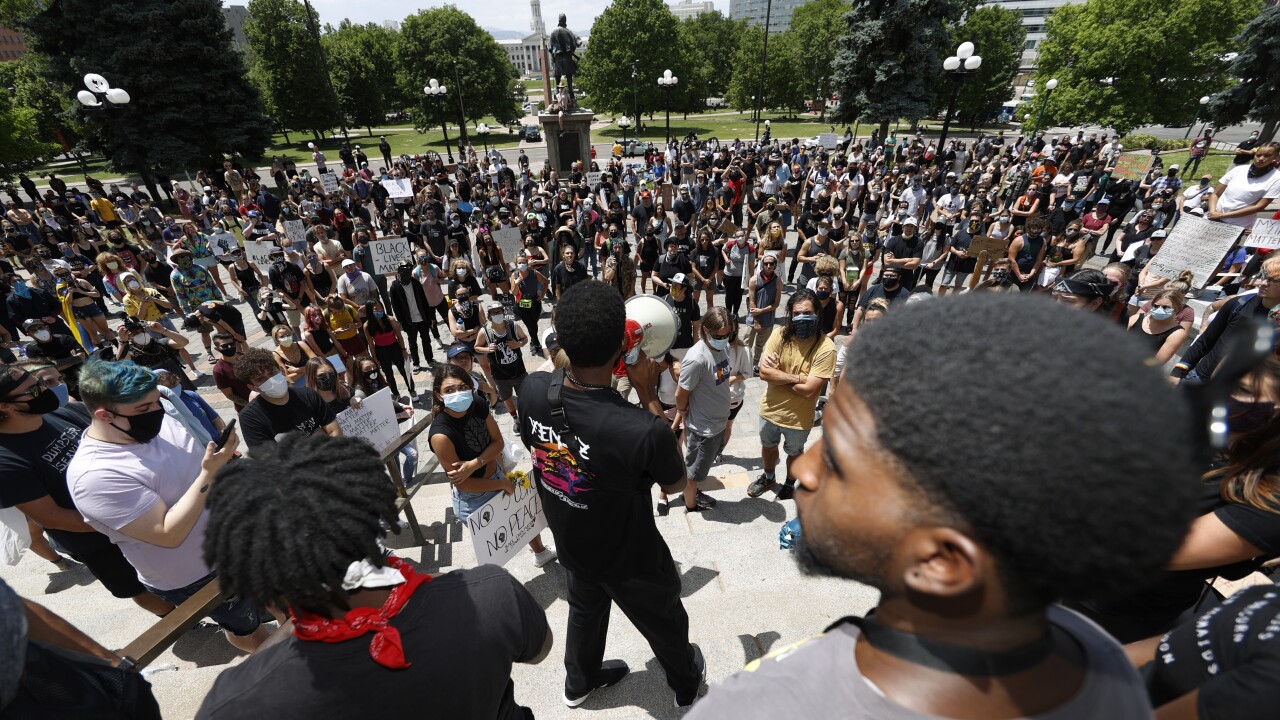 David Zalubowski/AP
A speaker addresses demonstrators gathered outside the State Capitol to protest the death of George Floyd, in Denver, Tuesday, June 2, 2020. Floyd died after being restrained by Minneapolis police officers on May 25. (AP Photo/David Zalubowski)

DENVER -- The Denver Broncos have planned a peaceful protest Saturday at the Colorado State Capitol, according to information received by Denver7.

Pushed by safety Kareem Jackson with help from teammates, the event is expected to include players and coaches. The Broncos will meet at the Capitol around noon with an opportunity to potentially speak with government and law enforcement officials. Players will be provided the chance to speak, if they wish, before the players and coaches lead a march downtown.

Jackson indicated Tuesday that he planned to talk to teammates about organizing a protest and said, "It's time to put some actions behind our words."

Labeled "Flowers for Mr. Floyd," a peaceful protest against police brutality is planned for 3 p.m. that also might include participation from Broncos players and coaches.

A number of Broncos players have spoken out following the death of George Floyd, who was killed when Minneapolis police officer Derek Chauvin pinned his knee on Floyd's neck for nearly nine minutes. Floyd pleaded for his life and said, "I can't breathe." Broncos safety Justin Simmons spoke at a protest in Florida last weekend.

He later tweeted, "Some of you are the same people who would interrupt Jesus when he was preaching the sermon on the mount. Jesus : "Blessed are the poor..." NO Jesus...blessed are ALL people. If black lives don't matter how can ALL OF LIFE MATTER?"

“As a Black man in a place of relative privilege, it’s my responsibility to utilize my platform & bring awareness to the unjustified murders & injustices that all Black people have endured in America. Specifically, at the hands of the police—who are supposed to protect & serve, not hunt & destroy.

"While I support the nationwide protests because they are necessary & I understand our people’s pain, the value of our lives can’t be relegated to a moment in time. We need actual changes implemented across the board in order to dismantle systemic racism.

The Broncos protest will take place two days after coach Vic Fangio said he did not see racism and discrimination in the NFL. He spoke to his players on Wednesday and apologized for his comments. His statement read in full:

"This morning, I realize what I said regarding racism and discrimination in the NFL was wrong. While I have never personally experienced those terrible things first-hand during my 33 years in the NFL, I understand that many players, coaches and staff have different perspectives. I should have been more clear and I am sorry. I wanted to make the point yesterday that there is no color within the locker rooms I have been in or on the playing fields I have coached on. Unfortunately, we don't live or work only within those confines. Outside of those lines -- both in the NFL and society -- there is a lot of work to do be done in the areas of diversity and providing opportunities across the board for minorities. As the head coach, I look forward to listening to the players -- both individually and collectively -- to support them and work hand-in-hand to create meaningful change."