Broncos' Paxton Lynch moves to No. 2 on the depth chart 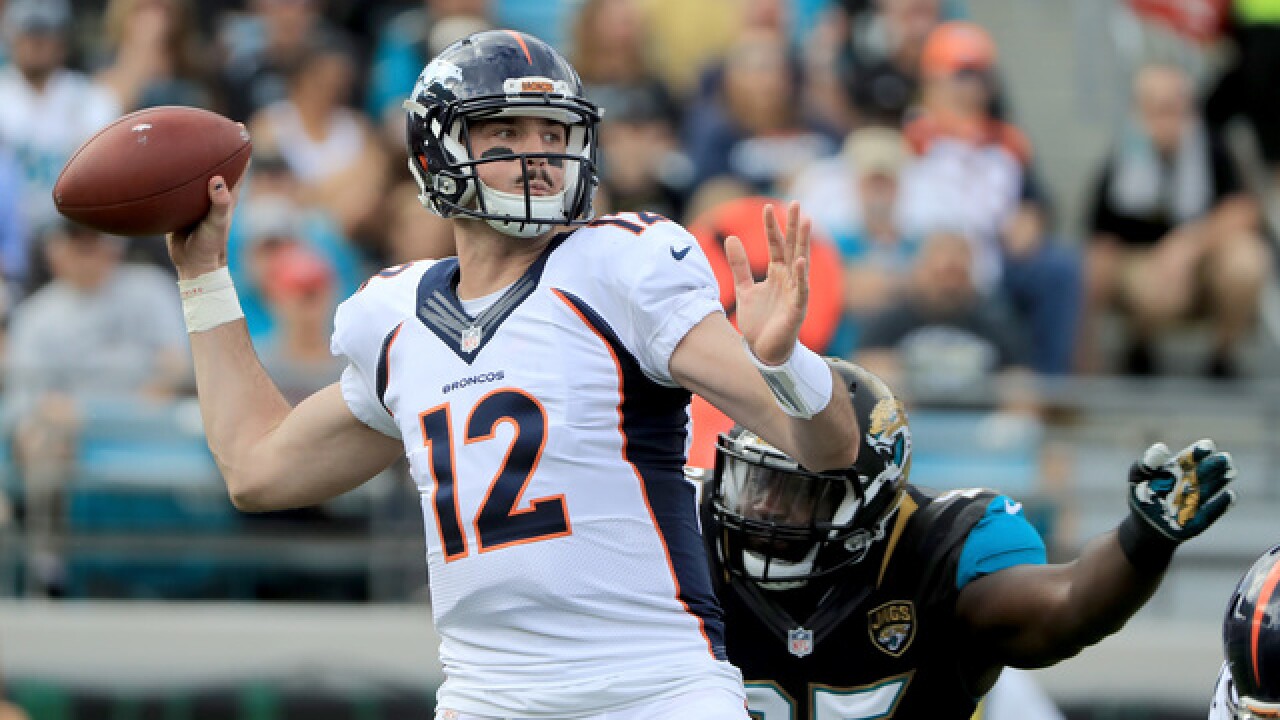 Sam Greenwood
<p>JACKSONVILLE, FL - DECEMBER 04: Paxton Lynch #12 of the Denver Broncos attempts a pass as Abry Jones #95 of the Jacksonville Jaguars closes in at EverBank Field on December 4, 2016 in Jacksonville, Florida. (Photo by Sam Greenwood/Getty Images)</p>

CENTENNIAL, Colo. -- Failing influences opinions and depth charts. With the Broncos strapped with a five-game losing streak, Paxton Lynch's methodical climb back took another step forward Wednesday as he was promoted to backup.

Broncos players figure the team can likely lose only one more game to reach the playoffs. With their contender status hanging on by dental floss, the Broncos continue to make moves to look at younger players (It's well overdue to happen on special teams where more athleticism and speed is needed).

Brock Osweiler, despite a sore right shoulder injury that limited his throwing Wednesday, will start. Lynch will be active for the first time this season, moving ahead of Trevor Siemian. The thinking is easy to follow without the team divulging much. Clearly, the Broncos want Lynch to be ready when opportunity presents itself. That could be as soon as next week if the Broncos fall to 3-7.

Osweiler, who is 0-2 as a starter but showed improvement against the Patriots, remains focused on his job, not the rearview mirror.

“If you boil it down, everyone is looking over their shoulder every single year. No matter how long you’ve been in this league or how successful you’ve been teams are always trying to find someone better and cheaper to replace you," Osweiler said. "If you let that bother you, you probably won't be in the league for long."

Lynch was sidelined for two months with a right shoulder injury sustained in the preseason. Siemian beat him out for the starting job, and Osweiler was added as a veteran reserve while Lynch healed. He has been throwing for three weeks, showing significant improvement. Lynch said he didn't know what to expect with his injury, "because I have never been through anything like this." Lynch, who went 1-1 as a starter as a rookie, believes the time rehabbing will benefit him.

"It was a big emphasis while I was in the trainer's room to see it from the inside out, to be on my iPad (watching video)," Lynch said. "So I feel like mentally I have taken a step forward."

Receiver Jordan Taylor is the new punt returner, replacing embattled rookie Isaiah McKenzie. Taylor has been practicing the craft since training camp. However, he does not have much game experience. He's been back on two punts in his NFL career, and rarely played special teams at Rice because they could not afford to expose him to injury. ... Defensive players lamented the Broncos' lack of leads during the five-game losing skid. Denver has held an advantage for less than 5 minutes during this stretch. It has marginalized the pass rush, and left the Broncos in a reactionary position. ... Part of the plan this week remains going back to basics. Denver has not won since Oct. 1.  ... Nose tackle Domata Peko admits he has a "chip on his shoulder" playing his former team this week. Peko has been of the bright spots in a dim season. ... The Broncos promoted linebacker Deiontrez Mount to the active roster and added tight end Brian Parker and receiver Tim Patrick to the practice squad. Mount could help on special teams. Linebacker Joseph Jones could as well. And with A.J. Derby (shoulder) and Jeff Heuerman (knee) dealing with a shoulder injury, it would be no surprise if Austin Traylor is activated from the practice squad.