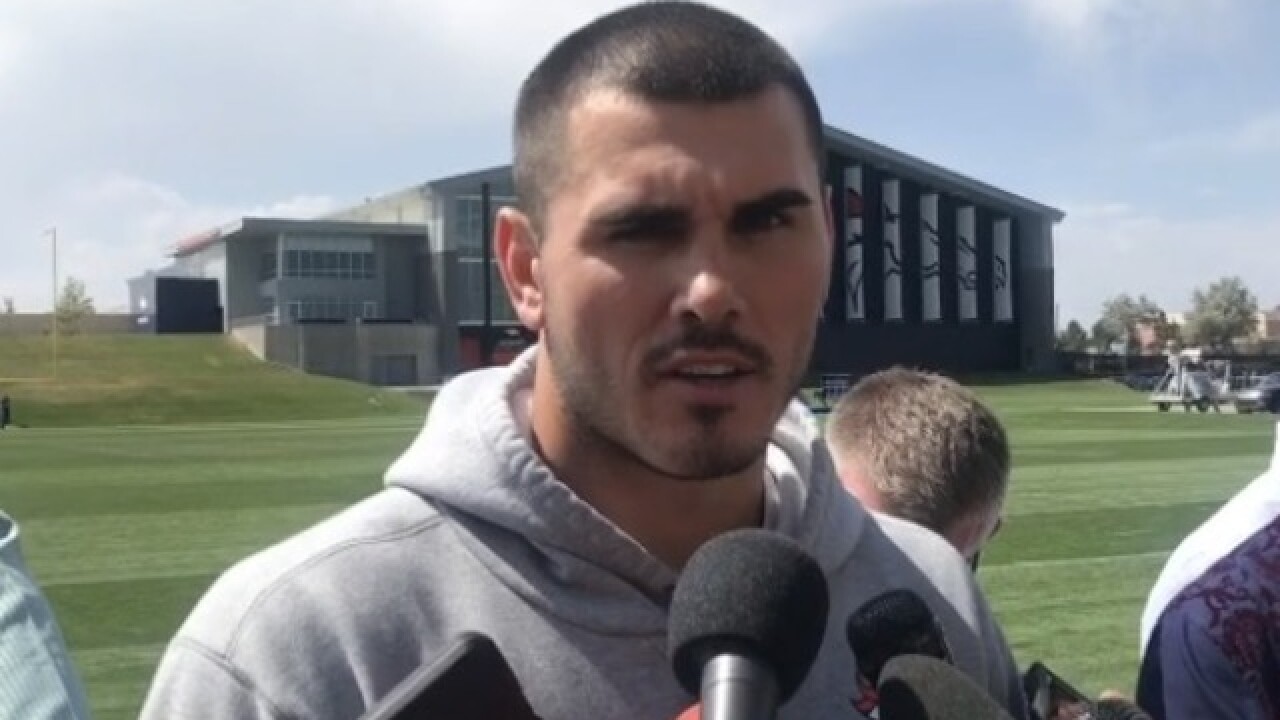 There exists a scenario, while implausible when fans booed Lynch off the field against the Bears, where both quarterbacks make the roster. It doesn't mean it will happen. But it could.

The Broncos secured a starting quarterback in March. The job belongs to Case Keenum. Case closed. No debate. No conversation. When training camp began, Lynch, the disappointing first-round pick, served as his backup. The idea was for him to learn under Keenum's watch, and take a necessary step forward in his third year. Whatever happened with Kelly, well it was sprinkles on the sundae.

Then came the games. Hope exited for Lynch.

He looked clumsy, ineffective and wildly unpopular. Fans turned on him in a way not seen since Kyle Orton stood between Tim Tebow and the starting job. As Lynch fizzled, Kelly excelled.

Kelly used his redshirt season on injured reserve to "learn how the pro game works, to learn the terminology" he told me a few months ago. Once overweight and injured, Kelly dedicated himself to his profession, recognizing that playing quarterback in the NFL is more about the software than the hardware.

"The confidence (this summer) comes from knowledge of the offense. First and foremost, you've gotta study the game, study what the other team is doing, study what your guys are doing," Kelly said to my question Tuesday. "You have to have that confidence whether it's out there playing backyard football or out here on this field."

Kelly so thoroughly outplayed Lynch in the first preseason game, the Broncos promoted him to the No. 2 job. Kelly has done nothing but reward their faith since the announcement, completing 28 of 41 passes for 340 yards, three touchdowns and one interception.

Broncos general manager John Elway told me he was prepared to exercise patience and see how Kelly performed before determining whether to bring in a veteran backup. Left unsaid, the Broncos would only get a veteran No. 2 -- like Mike Glennon, Landry Jones, Brett Hundley, Matt Moore -- not a veteran No. 3.

That's what makes this Thursday's game at Arizona interesting. If Kelly continues his summer arc, he could -- again emphasis on could -- provide a cushion for Lynch's plummet from grace. It carries a risk to go with Kelly in the second spot. He has played three games in 660 days due to injuries. And the waiver wire could be tempting this weekend when considering Kelly has never taken an NFL snap in a regular season game.

Yet, Kelly provides a compelling argument to enter the season as Keenum's reserve clause rather than bring in a veteran No. 2 that would drop Kelly to the third spot and Lynch off the roster.

"What you see from (Kelly) is what we see. He doesn't hide anything," said reserve receiver Tim Patrick, who has all but locked up a roster spot with his terrific special teams play. "He is confident. He steps into the huddle, and says exactly what we are going to do."

It fits his nickname: "Swag." He gave it to himself a few years ago. Bold strategy, Cotton. Such a moniker demands high self-esteem and elite performance. Kelly has delivered this summer.

"Yeah I call him Swag. Everyone does," Patrick said. "Even the coaches do."

While Kelly has proven he belongs, it raises the question: Why bother keeping Lynch? He has earned the right to be severed from the roster.

I asked him Tuesday if he wants to remain with the Broncos.

"Absolutely. I love it here. I have said from Day One I want to be the guy here. But I have gone through some things. I have struggled, and at times I have played well," Lynch admitted. "I need to find that consistency of constantly playing well, and I know I get there."

Even while taking reps on the scout team? Lynch insisted, yes.

In that scenario, the Broncos would pay him to practice rather than pay him to go away. If Lynch shown more in the preseason, it would have created trade interest. As it sits, there's no demand for him given his contract status and results. The Broncos would absorb a $4.9 million cap hit ($3.8 million this season, $1.8 million in 2019), according to overthecap.com, if they cut Lynch.

Lynch has provided ample reason for making the move. And yet, this odd scenario exists where Kelly, once Mr. Irrelevant, could save Lynch from becoming just that.

Coach Vance Joseph said Devontae Booker and Royce Freeman have established themselves as the top two backs. He isn't worried about who starts, saying it could change depending on the play call early in the game. Freeman, however, is likely to get a few reps Thursday, while Booker sits. ... The Broncos will rest 22 starters on Thursday. Also, newly-signed cornerback Adam Jones is not expected to play. ... Safety Su'a Cravens is likely to make his preseason debut after missing several weeks with a knee injury. ... Joseph heaped praise on undrafted free agent Phillip Lindsay, who has made this team with a terrific summer as a third-down back and mismatch in space. "I think what No. 2 has done is real. It’s not just a fluff story. He has earned his right to be here."