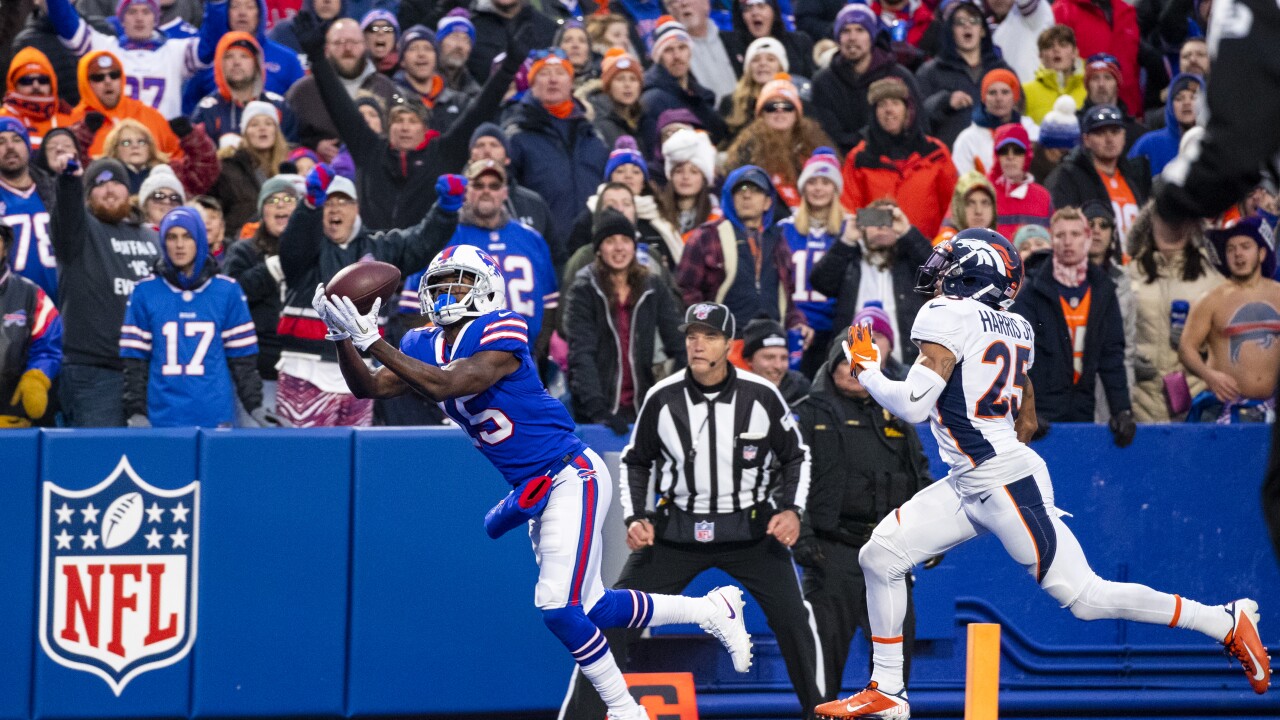 ORCHARD PARK, NY — Four hours before kickoff, around the corner from the prominently-featured Bills Mafia house, in the hand-numbing cold of Lot 6, a voice came over a microphone. I am not sure if it was from a tailgate party, a bartender or a higher power.

The zinger penetrated flesh like the howling wind. It stung. But it represented the truth. The Broncos are not very good. They have been better this year, competitive in all but two games, but they are not very good. On a refrigerated November Sunday, the cold reality of the season punched Denver in the mouth. The Broncos proved no match for Buffalo, mauled 20-3 at rowdy New Era Field.

This game clinched the Broncos' third straight season without a winning record, their worst run since the drought from 1963-72. A number of issues surfaced in this loss -- the Broncos could not corral Bills quarterback Josh Allen, the offensive line is leaking oil -- but one will be discussed in Denver. Is it time to start rookie second-round pick Drew Lock?

With all due respect to Brandon Allen, who plays with fire, there's no reason to continue using him at this point if Lock is ready. Allen suffered through a dreadful 10-for-25 performance, and has completed 39 of 84 passes with three touchdowns and two interceptions during his cameo.

The Broncos had nine first downs and eight punts on Sunday. It's not working. And there's no reason to believe Allen is the future, other than as a possible quality backup.

“I haven’t thought about it,” said Fangio about playing Lock, meaning he was still focused on the loss to the Bills.

Sunday represented Allen’s worst outing. It wasn't his fault alone. Yet, the numbers are sobering. Allen passed for 82 yards with one interception. The Bills sacked him four times. The Broncos ran with some effectiveness, but the lack of weapons in the passing game remains painful. Courtland Sutton was targeted eight times with one catch for 27 yards.

After racing out to a 20-0 halftime lead at Minnesota, the Broncos have failed to score a touchdown in six quarters. Sunday was a mess. As former Broncos left tackle Ryan Harris tweeted, "This offense is AWFUL."

At one point in the second half, the Broncos went three-and-out five straight times.

“It’s frustrating,” said running back Phillip Lindsay, who rushed for 57 yards. “We were putting our defense in a bind. We were not getting good field position. That’s on us. And two, if you keep giving them chances in the red zone it’s like a slot machine. Eventually, it’s going to pop.”

It started out with flickers of promise before dissolving into the season’s ugliest road loss.

The Broncos became a Rudyard Kipling poem in the first half, a series of "Ifs." If they could have avoided Dalton Risner's paralyzing 15-yard unnecessary roughness penalty, they would have been in position to lead on their first drive. If Allen and Sutton had not crossed wires on a route -- Sutton stopped, Allen threw the go -- Denver could have trailed by a field goal at half, failing to capitalize on a turnover. If the Broncos had tempered the run -- they allowed more yards on the ground than in the previous four games -- they could have controlled the clock.

“I shouldn’t have fell on top of him. I was trying to be physical early in the game. I shouldn’t have done it,” Risner said of his penalty. “We couldn’t find that rhythm today. I wish we could have. Things just did not work out. At the end of the day we have to be better.”

As such, the first 30 minutes were bitter, forgettable, but not impossible to overcome. That is if the defense remained stout. Trailing 6-0, the Broncos were gashed on the opening drive in the third quarter. When former Wyoming star Allen drilled an 18-yard dart to Cole Beasley for a score, hope vanished. Allen added a 34-yarder to John Brown in the fourth quarter as an ice pick into the back.

The Broncos briefly teased their fans with a promising third quarter response. They drove 48 yards on 10 plays. Lindsay continued to show toughness, sitting at 50 yards rushing after the drive. However, it stalled like so many over the last six quarters. After the Broncos considered going it for on fourth-and-13, Brandon McManus jogged onto the field and averted the shutout with a 45-yard field goal. It was the only indignity avoided.

The Broncos' 15-play script is a real thing, but too often it is the only thing. The Broncos excelled early in the past three games, but Sunday's first drive faded to black after a controversial yellow flag. On second down from the 29-yard-line, the refs called Risner for unnecessary roughness for jumping onto an opposing defensive lineman while he was on the ground. Pushed back 15 yards, it might as well have been an acre in the wind. The Broncos punted and learned what all the fuss is about with Josh Allen. The former Cowboys standout was drafted for days like this -- this was balmy for Laramie. With a big arm and legs that allow him to truck more defenders than Tonka, he is comfortable in these conditions. He converted a pair of third downs, including juking Todd Davis on a long gain, but the Broncos stiffened.

With the Bills going uptempo -- somebody watched the Vikings' second half last week -- the Broncos rotated outside linebackers and defensive linemen. It paid off as Miller, fresh after sitting out a few snaps, sacked Allen, leading to a 39-yard Stephen Hauschka field goal. It proved a small morsel. The Bills clomped 69 yards on 17 plays, gobbling 8 minutes, 49 seconds of the clock.

Trailing 3-0, Buffalo's Allen went to work again. He scrambled 18 yards for a first down as he eluded Dre'Mont Jones, Davis and Malik Reed. Chunk plays followed -- a 22-yard reverse by Robert Foster, and a 30-yard play-action strike to Cole Beasley, who became isolated on a linebacker. The Broncos showed elasticity, and resolve. A penalty forced the Bills into another short field goal, a 23-yard boot after 12 plays. Despite a statistical mauling, the Broncos remained within arms reach.

It made Bills vulnerable to a mistake. Josh Allen delivered, airmailing a ball to Justin Simmons playing center field. Simmons has delivered a Pro Bowl-caliber season. It represented only the Broncos' sixth interception as they entered Sunday tied for the fourth-fewest. Moments later, Allen and Sutton misfired, that pick all but sealing the loss.

The Broncos wandered out of Buffalo with a 3-8 record. This is not the season they expected. Now it's time for evaluation. Will that include a new quarterback against the Chargers?

Drew Lock is on the clock. The Broncos must activate him before the Texans game or keep him on injured reserve. But will it be sooner? He has made progress during practice, leaving him in position to back up Allen this week. .... Broncos cornerback Duke Dawson entered concussion protocol after a hard tackle in the third quarter. ... Linebacker Josey Jewell hurt his ankle in the first half and did not return. He left the locker room with a boot on his foot. .... Shelby Harris hurt his ankle in pregame and wore a boot after the game. … A promising season for DeMarcus Walker has veered off course because of a right shoulder injury suffered in practice before the Browns game. Walker remained inactive for a third straight game Sunday, losing his spot to Adam Gotsis. Walker's shoulder is close to healthy, but Fangio said Gotsis deserved to stay on the field. The other inactives: right tackle Ja'Wuan James (sprained left MCL has limited him to 32 snaps this season), tackle Calvin Anderson, linebacker Justin Hollins (hamstring), cornerback Cyrus Jones (illness), Jonathan Harris and receiver Juwann Winfree. ... Cornerback Bryce Callahan (had new screw inserted in his foot to promote healing, hopes to be healthy for offseason program.