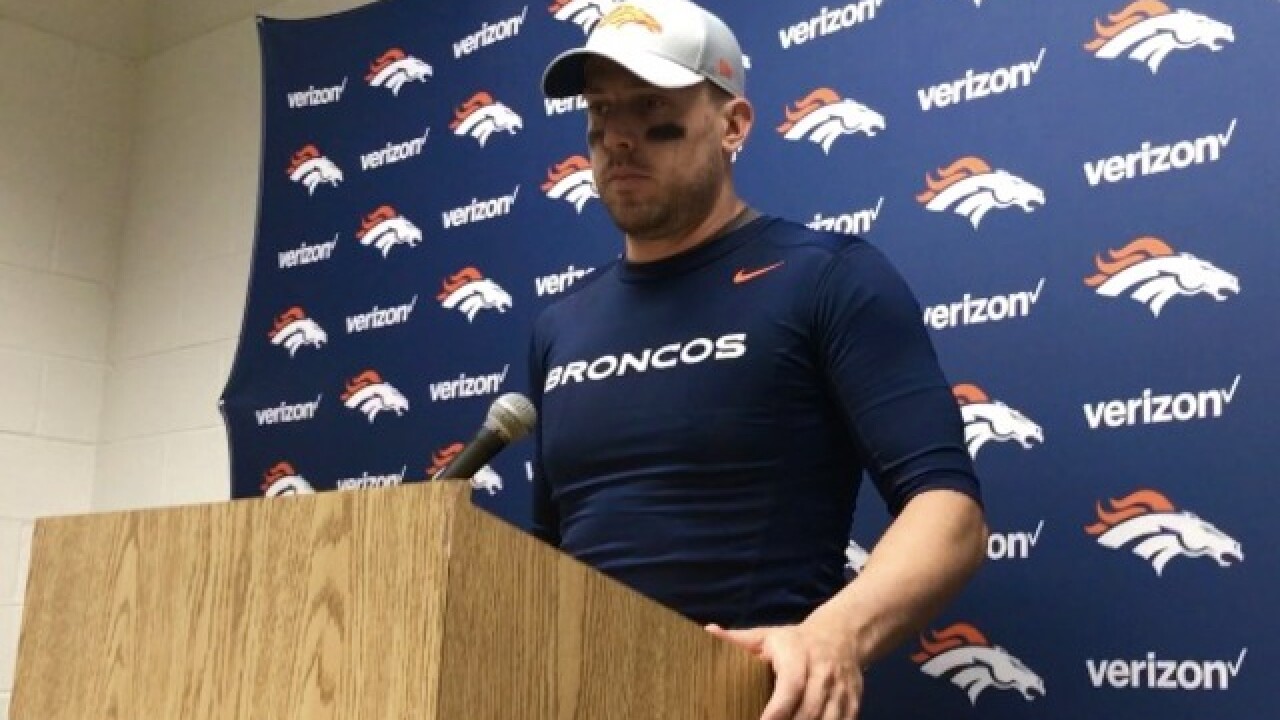 LANDOVER, MD -- No reason to cover the children's eyes. Or make plans to build puzzles and eat shards of glass on Sundays. The Broncos offense awoke from a near two-year slumber, looking more like MTV than C-SPAN.

The Broncos triumphed 29-17 at FedExField. No one will remember the score. This game will resonate for Case Keenum's performance with a suddenly nitromethane-fueled attack.

"We played with good rhythm tonight," coach Vance Joseph said. "It was nice to see."

Keenum entered Friday seeking improvement, starting with his footwork. While he profiled as a team leader the moment he walked into the building, his performance had not matched. What played out against Washington explained why the Broncos sought him in the opening hours of free agency.

He found multiple receivers, directed traffic and was accurate. He finished 12-for-18 for 148 yards. He failed to deliver a touchdown this preseason -- he will not play in the finale at Arizona -- but more importantly finished with no turnovers. That cannot be overstated after the Broncos carousel of quarterbacks fired 22 interceptions last season.

"I am happy with where we are at. I am happy with what we did tonight, especially scoring points. But we have to get better," Keenum said. "My main goal as a quarterback is to take care of the football. I had a batted ball that could have been picked. But when we are all taking care of the ball, it's important."

Keenum shoved the Broncos ahead 10-0. It started at the beginning with an 11-play, 52-yard first drive, capped by Brandon McManus' 50-yard field goal. The decaffeinated launch against the Vikings seemed like a long time ago.

In perhaps his most impressive march with Denver, Keenum connected on a 27-yarder to Courtland Sutton, who created space against top corner Josh Norman, a 13-yarder to Demaryius Thomas and 5-yard snap to Jake Butt for his first preseason catch. One defensive player promised that Sutton's preseason stardom is legit, calling him "MegaTron Jr." because of how he physically compares to future Hall of Famer Calvin Johnson.

Royce Freeman -- I need more bellcow, remember? -- made Sutton's catch matter with a 24-yard tackle-breaking burst for a touchdown. Freeman (26 yards on five carries) delivered a pair of ground scores, making a compelling case for the starting job ahead of Devontae Booker (9 yards on three carries).

"I am not worried about (who starts)," Joseph said. "We are going to need three guys."

Of note, Keenum continued to develop a strong connection with Emmanuel Sanders, who has had the best preseason of any Bronco. Call the combo 10-4, as a Twitter follower suggested. Or just label it electric after two years of acoustic club shows. Keenum targeted Sanders eight times. He finished with 61 yards on four catches. One stuck out -- a 33-yard reception on a perfectly placed throw by Keenum in front of the hard-charging safety. Sanders showed versatility, capping a second-quarter drive with a 27-yard touchdown on a reverse. Fullback Andy Janovich, as he did on Freeman's long run, provided a crushing block.

"My first rushing touchdown as a Bronco, huh?" Sanders said. "It felt good. It starts with Case, and what he's doing with the offense."

It symbolized a night when the scattered puzzle pieces fit.

Coach Vance Joseph told me earlier this week how the defense is built to play with a lead. It allows the pass rushers to wander out of the shadows and into the spotlight. Through three quarters, the Broncos delivered 10 quarterback hits and three sacks, including one by outside linebacker Shane Ray and a shared crunch by Von Miller and Bradley Chubb.

"You could see what we can do when we have a lead," Chubb said. "We have work to do. But we are getting there."

Added linebacker Shane Ray, "We can win a lot of games playing the way we did tonight."

Washington quarterback Alex Smith looked lost against Denver. Washington finished 0-for-7 on third downs in the first half. If not for runningback Adrian Peterson joining Washington this week, the Broncos starters would have pitched a shutout. Peterson collected 56 yards on 11 carries, among them a 15-yard wiggle on fourth down.

In the process of their best game, the Broncos found a player worthy of roster spot discussion. Safety Dymonte Thomas, playing with Su'a Cravens (knee) and Will Parks (knee laceration) out, produced a fourth-down stop and sent Washington to the sidelines by batting a third-down pass with the starters.

Parks told Denver7 that he sat after his knee stiffened in warmups. He expects to be ready for the season opener.

About that backup quarterback spot?

Chad Kelly (7-for-11, 70 yards) locked up a job on the roster. Where he plays remains uncertain. He made a strong case to stay No. 2 with three scoring drives. Denver could still add a veteran after final cuts. But it will not come at Kelly's expense. Paxton Lynch remains the odd man out. He received garbage time action, and will likely get a chunk of snaps next week as half of the 90-man roster rests.

This night belonged to the quarterback landed because of the play of Lynch and crew last season. Keenum looked sharp. He looked ready to make last year's offense a memory.

"We were very efficient. We ran the ball, we threw the ball," Joseph said. "We have played enough football, tonight's performance was nice."

The Broncos reached the third week relatively healthy. Safety Su'a Cravens represented a notable absence. The Broncos were hopeful he would play this week as he recovers from a sore knee. The Broncos acquired him for a draft pick to help provide a physical presence and cover tight ends. However, he has not practiced much and has missed the entire preseason schedule. This represents a concern given that he missed last season with Washington with concussion issues. He's not likely in danger of being cut, but if healthy, he could be one of the few big names to participate in the preseason finale at Arizona.

Not a fine time

Friday represents a fine day in the NFL. The Broncos didn't escape the league's wrath. Reserve linebacker Jerrol Garcia-Williams was docked $20,054 for a hit on a quarterback vs. the Chicago Bears, per an NFL source. However, rookie cornerback Isaac Yiadom was not fined for lowering his head on a hit on a ballcarrier. I like that for this reason: they need to waive fines or not fine players until they get a handle on how to interpret the new rules.

The Broncos starting lineup underwent one change. Left guard Ron Leary continues to recover from offseason surgery on his right knee. He participated in a full pregame workout, but did not play. Max Garcia, who has been a surprise of the summer, started in his place. He was a bit inconsistent, especially in the run game. On the bubble before camp, Garcia has secured a roster spot. Who will join him? The Broncos need a backup tackle with the competition between Cyrus Kouandjio and Elijah Wilkinson. ... Broncos linebacker Brandon Marshall and receiver Demaryius Thomas stayed in the tunnel during the playing of the national anthem. ... Linebacker Todd Davis was flagged for lowering his head on a hit against Adrian Peterson, and faces a potential fine. ... Safety Shamarko Thomas was taken to a local hospital with an eye injury. ... Brandon McManus looked strong with five field goals, including a pair from 50 and 56 yards.