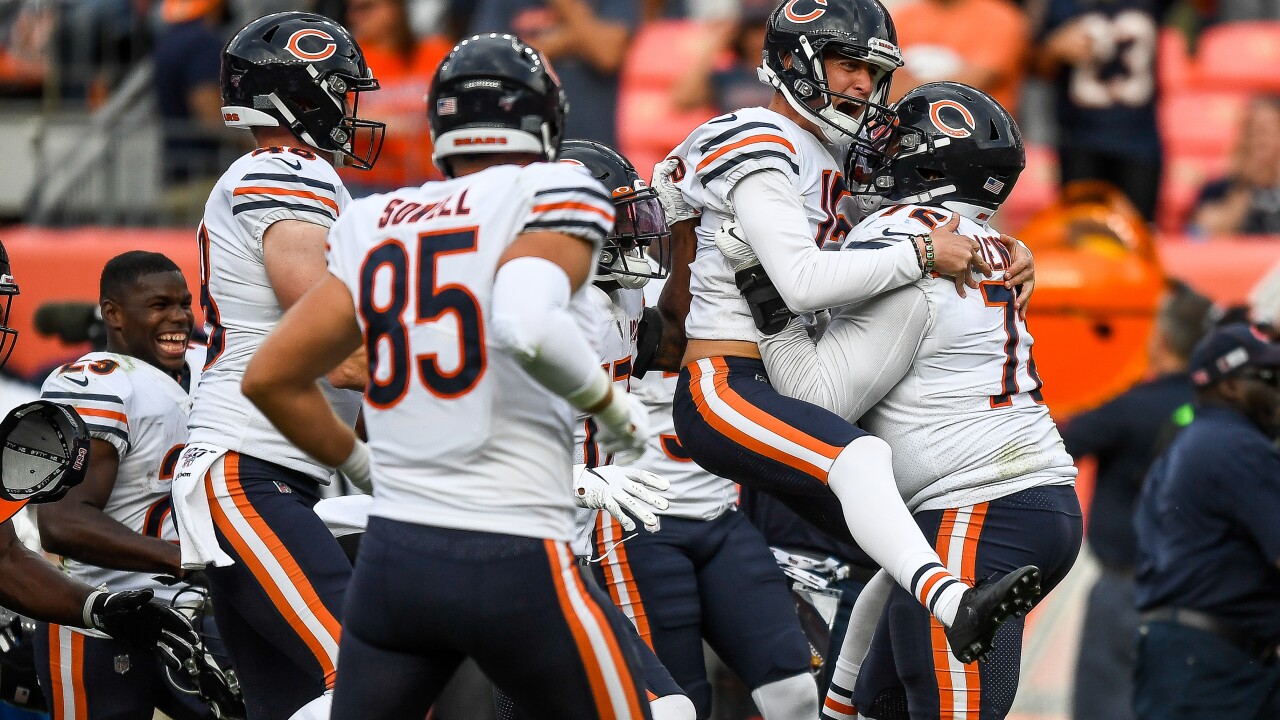 DENVER — The Broncos players mostly tried to stay positive after the most disappointing regular-season loss in recent memory, a 16-14 heart-in-a-blender defeat to the Chicago Bears, discussing ways to eliminate mistakes, promising, in the case of embattled left tackle Garett Bolles, to improve.

But before anyone opened their mouth in the locker room, the disbelief and disgust were real.

"It was trash, garbage," Broncos defensive lineman Shelby Harris said of the ending.

"It just sucks," tight end Noah Fant admitted, "to lose like this,"

Perhaps the Broncos didn't deserve to win. They committed 10 penalties, converted three third downs, and spent the better part of 59 minutes stubbing their toes. Then, they staged a breathtaking drive -- at least for an offense that hadn't scored a touchdown -- in the final minutes. They rumbled 62 yards on 12 plays, culminating with a 7-yard score from Joe Flacco to Emmanuel Sanders. A bizarre sequence ensued. The Broncos lined up for two, "which is what coach (Vic) Fangio said he was going to do going back to OTAs. That he would go for the win," said Chris Harris Jr. A delay of the game squelched the idea, temporarily. Brandon McManus missed the extra point, but the Bears were called offside.

Not fearing the ledge and showing the guts of a cat burglar, Fangio returned to his original plan. Flacco connected with Sanders on the 2-point conversion as the crowd erupted in joy. Abruptly, sadly, it evaporated. The Bears took over at their 25-yard line with 31 seconds remaining. The first play became ominous. Mitch Trubisky completed a 5-yard pass, but the officials tacked on 15 yards with a roughing the passer call on Bradley Chubb. It was a questionable call, and left the Bears at the 45-yard line with 24 seconds remaining because the penalty stopped the clock.

"The refs called it, so that's what it was. You've got to handle the game earlier," a numb Chubb said, talking to the press after spending several minutes staring into his locker.

Three straight incompletions followed along with a Bears penalty. It left Chicago on its own 40 with nine seconds. Trubisky took the shotgun snap, scrambled to his right and connected with Allen Robinson for a 25-yard gain. Harris Jr. appeared to touch Robinson as the clock was hitting zero. The officials determined there was 1 second remaining -- "I had no recourse on that one. At that point it's handled in New York," Fangio said. The Bears, whose 2018 season was spoiled by a series of ricochets and boinks, trotted out Eddy Pineiro for a 53-yard attempt. He split the uprights, leaving the Broncos 0-2 for the first time since 1999.

“Where’s that one second come from? That magical one second," lamented Broncos defensive end Derek Wolfe, who couldn't believe he was called twice for defensive holding.

Added Harris Jr., "That was just crazy, man. We fought hard. To get the lead and lose it like that hurts."

Pineiro ran into the visitors tunnel at 5:36 p.m., screaming in excitement. The Bears fans in the south end zone greeted him warmly.

The Broncos put themselves in position to be crippled by one play because they could not produce a takeaway, could not register a sack, could not pressure Trubisky, and could not score a touchdown until the fourth quarter. They had a reason to be mad. They feel like a targeted team that cannot catch a break. But playoff teams create their own luck, and the Broncos are a franchise that is 10-23 over its last 33 games, a dive that is taking longer to emerge to the surface from than anyone wants or desires.

Nobody rode the wave harder than embattled left tackle Garett Bolles. He has gone from a promising prospect to a target of frustrated fans. Bolles provided venom to drives -- paralyzing them from the start -- with four separate holding calls. Midway through the third Bolles had more holding calls (four) than the Broncos had points (three). Two were declined, but it spoke to a larger issue. Bolles has led the team in penalties in his first two seasons and was trending on Twitter at halftime. The crowd of 74,254 lost patience -- venting years of anger by reigning boos on Bolles.

"There are some calls I disagree with. There are some I understand. I have the best offensive line coach in the league (in Mike Munchak). I am grateful for him. The coaches believe in me. I know my teammates believe in me, and I know the front office believes in me," Bolles said. "I am going to turn this around, I promise you all that. I promise Broncos Country that."

At this point, fans want performance. Be about it, don't talk about it.

Broncos offensive coordinator Rich Scangarello embraced the challenge of facing the Bears. Are they the NFL's best defense? Yes. But it provided a measuring stick of ground the Broncos need to cover to return to relevancy. Denver's first drive proved on point. The Broncos targeted Sanders twice, which is two more passes than he received in the first 28 minutes last Monday. They used bootlegs, and short passes to running back Phillip Lindsay and Jeff Heuerman. A field goal always feels empty, but it felt like it could produce a victory at home.

The Bears answered with a methodical drive aided by defensive holding call by Derek Wolfe and a missed tackle from cornerback Isaac Yiadom. The Bears gave the Broncos a gift with a third-down run to snuff out the drive, but tied the score with Pineiro's 40-yard field goal. Chicago gobbled the clock -- taking 7:28 off -- before stalling out. The Broncos began to recognize this as a bare-knuckle brawl. The defense that gets off the field on third down or nets a takeaway was going to win.

The second quarter tilted against the Broncos. The Bears delivered a 10-play, 56-yard drive capped by Pineiro's 52-yard boot with 5:10 left in the half. It began a forgettable stretch for the offense.

As the Broncos fluttered and fizzled, the Bears found traction, scoring their first touchdown on their 19th possession of the season. Cordarrelle Patterson reached 23 miles per hour on a reverse, netting a 46-yard gain. It was amplified by the lack of scoring. The Bears trudged to the 2-yard line, and a third-down fizzle was negated by a Harris Jr. penalty, leading to David Montgomery's 1-yard leap. All touchdowns are reviewed upstairs, and it was deemed good. It represented the Bears' first touchdown in 19 possessions and shoved them ahead 13-3 early in the fourth quarter.

With hope flickering, the Broncos showed resistance. They rallied for a field goal, a drive that came back to life with a roughing the passer penalty. But trading touchdowns for field goals remains a recipe for a loss. Flacco remained accurate but lacked a big strike to force the Bears off the line of scrimmage. His longest completion was a 24-yard gain to Fant.

Trailing 13-6, another Broncos threat ended at the goal line when Kyle Fuller intercepted Flacco on a pass intended for Sanders. It spelled doom. Then it didn't. For a few minutes, Denver experienced a sprinkle of comeback magic that defined this franchise for two decades. Flacco finished 35 of 50 for 292 yards, delivering a go-ahead score to Sanders.

It was a time to cherish. Too much time. There were still ticks. First, 31. Then 1 second. It was all the Bears needed to crush Denver's dreams.

"This is really tough. All I know is that we can't let this define us," Wolfe said. "I think we showed how good of a team we can be. We've got to just keep trucking, keep moving, keep pushing, keep grinding and try not to be in that situation where we have to count on the refs to look at the clock and see that it's actually at zero. I guess we've got to be to be up by a touchdown for that to happen."

Footnotes
The Broncos defense faced the Bears compromised. Despite a great week of practice, the Broncos took a cautious approach with linebacker Todd Davis (calf). Davis, who practiced last week for the first time since July 18, is likely to start against the Packers. Davis told Denver7 after the game that he expects to play vs. Green Bay. ... Cornerback Bryce Callahan (foot) is officially a concern. He is dealing with the same foot injury that sidelined him last season, and his return to the lineup remains uncertain. Receiver Juwann Winfree was among the Broncos inactives. The addition of River Cracraft spelled doom for Winfree this week because he knows all the routes as a replacement for Tim Patrick. The other actives: Janovich, Jones, Ja'Wuan James, and Mike Purcell. ... Fullback Andy Janovich (pectoral) and Joe Jones (triceps) did an extended pregame workout with the practice squad and inactive players, wearing helmets during their drills. Both are close to returning either for the Packers or the following week.