Schofield working at guard and tackle 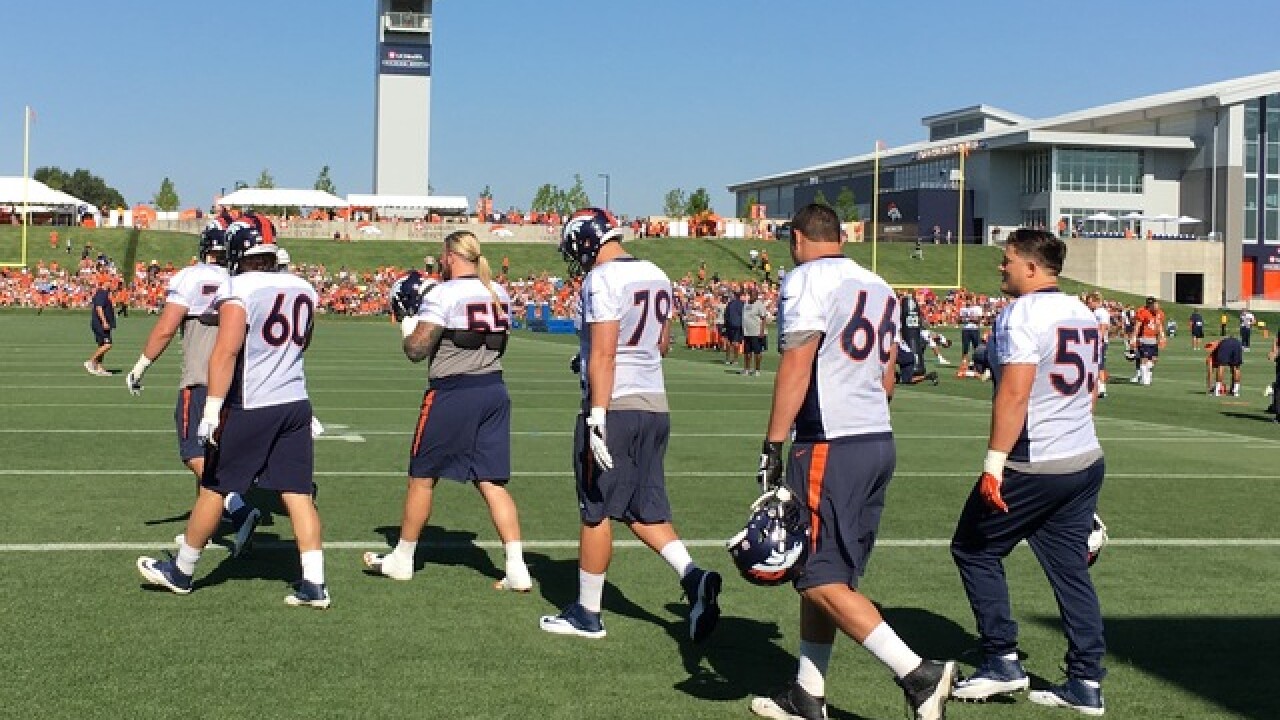 CENTENNIAL, Colo. -- Unlike the Chris Sale giveaway jersey, offensive lineman Michael Schofield fits into the Broncos plans -- it just might not be at one position.

Schofield, No. 79 in the picture above, endured extreme highs and lows in his second season. He started 13 games at right tackle. He improved in the playoffs, but his inability to block Oakland linebacker Khalil Mack remains seared in the brains of many fans. Mack registered five sacks in an Oakland win, including three at Schofield's expense, making him a target for venom. He survived the experience with the help of teammates and family.

"Last season, the way I describe it, was definitely a roller-coaster ride," Schofield told Denver7. "The one everyone talks about is the Raider game. That got to me. It kind of messed with me mentally. After that game, I played pretty well against the Steelers. (Former Broncos) Tyler Polumbus and Ryan Harris were both telling me to focus on technique. I went back to basics. Then when we went to the playoffs and had a bye (game) I had even more time to focus on technique and I thought I finished pretty well."

Schofield, a third-round pick in 2014, spent the offseason knowing he might have a smaller role with a determination to get bigger. The Broncos signed free agent tackles Russell Okung and Donald Stephenson as starters. Schofield bulked up to 305 pounds -- that's roughly six more than last year "and (that) has really helped," he said -- and nearly 20 more than his rookie season. It leaves him in position to function as a utilityman. In the first eight days of camp, he took reps at both tackle and guard spots and even tight end at the goal line.

"'Scho' gets the short end of the stick because we are moving him everywhere," coach Gary Kubiak said. "It's giving him a chance to be a really good player. He’s got all those snaps and starts under his belt as a right tackle. He played in the Super Bowl. You think of the things he's been in, and now playing all over the place is giving Michael a chance to be the best player he can be."

As a right guard, Schofield remains in the mix to start. Ty Sambrailo is limited due to a hyperextended right elbow. It has created opportunity for fourth-year player Darrion Weems, who ran with the first team for a second straight day, rookie Connor McGovern, James "Brick" Ferentz and Schofield. Schofield played some guard at Michigan and the Senior Bowl.

"The more you can do, I am taking that to heart right now," Schofield said. "It is different. At tackle you can get like two kicks in before you are even touching the guy. [As a] Guard, one step and you are already in contact. And the guys you are going against are a little bigger. On the edge, you have quicker guys. If asked, I am definitely willing to play there. I played it before and I think I am getting better at it."

Schofield spent part of his offseason in Chicago, near where he grew up. He's a White Sox fan and attended the infamous game when pitcher Chris Sale went Edward Scissorhands on the Chicago throwback jerseys with collars.

"I got one of the giveaway jerseys, but it was a large. There was no way I was getting into it," Schofield said. "I gave it to a kid instead."

The cool weather drew in the fans. An announced crowd of 5,587 attended Friday's practice, the most since the team relocated from Greeley to Dove Valley in 2003.

A linebacker who continues to impress as he tries to win a roster spot? Try Zaire Anderson. He delivered another big hit Friday. He hurt Ronnie Hillman's back with a hard tackle earlier in camp.