Broncos' meek second half leads to ugly loss to Bills 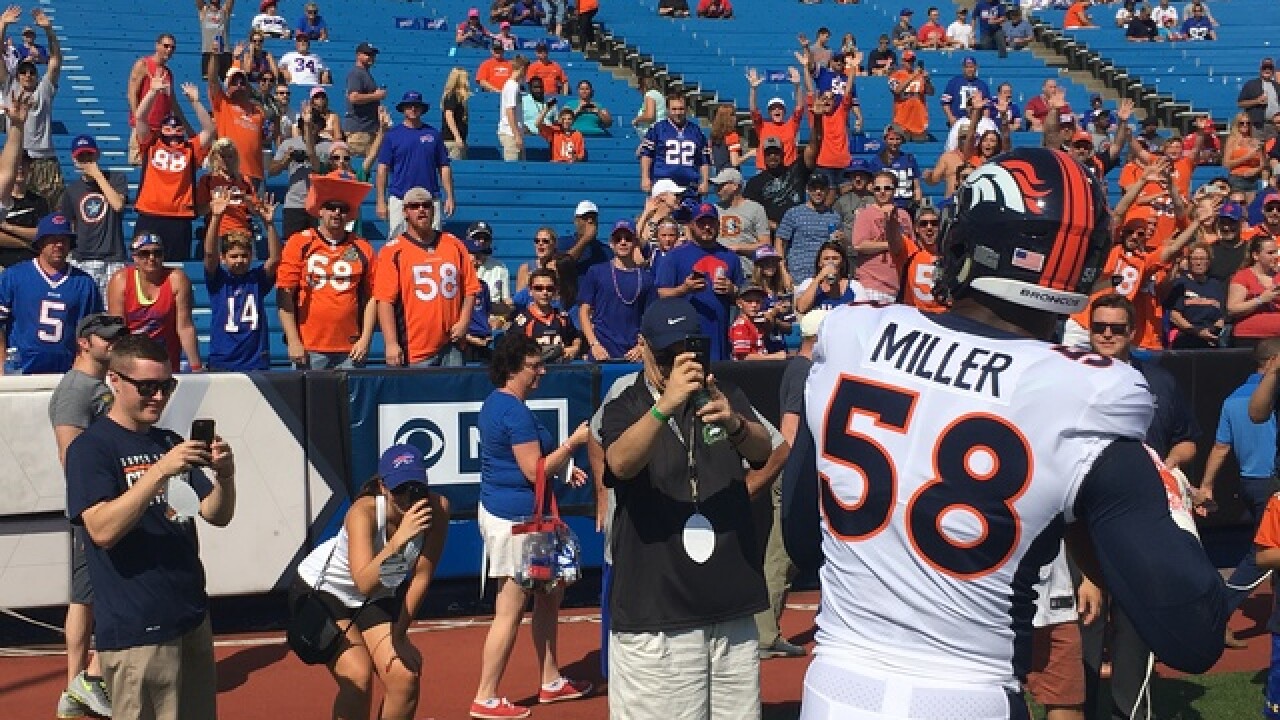 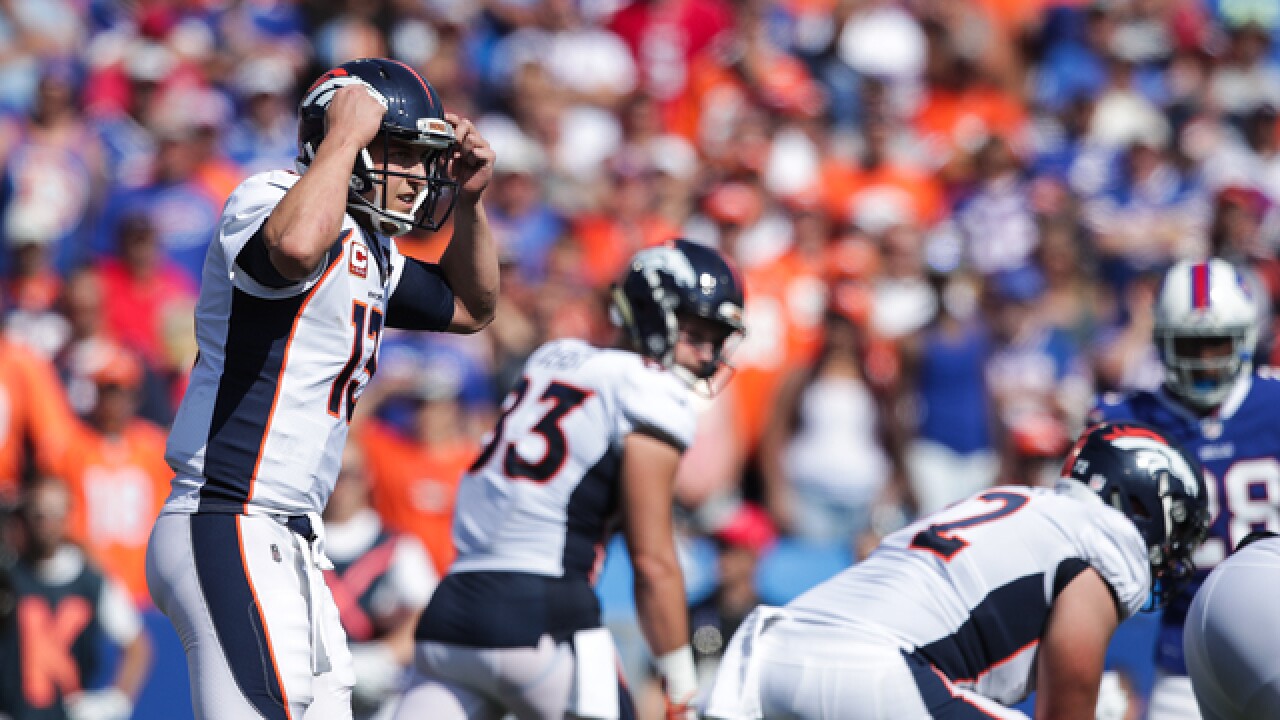 ORCHARD PARK, N.Y. -- At 12:08 p.m., the Broncos confirmed their arrival as the defense jogged down a tunnel at New Era Field, sidestepping the Penn State marching band and curious onlookers.

There was not a light on the other end.

Darkness fell on the Broncos' undefeated season, the first road game producing the season's first loss, Denver within a handshake of victory before watching it slip helplessly away to the Buffalo Bills, 26-16.

In the fourth quarter, when outcomes in visiting parks are often determined, Von Miller made a play. His importance to the Broncos is unrivaled by anyone wearing orange. With the Broncos trailing 23-16 and desperately needing a lift, Miller barreled into the backfield. He knocked down quarterback Tyrod Taylor, ending the Bills drive and giving the Broncos a chance to tie.

And then a gentleman's handshake turned into a head-shaking choke lock on the Broncos.

Miller extended his hand to Taylor as the Broncos defense jogged off the field. As Taylor reached out -- the two are friends and Taylor was chatting up Miller during the game -- the star linebacker pulled back the offering. Both players laughed. The official did not. He called Miller for a personal foul in the most literal translation of the rule possible. It turned a caffeinated moment into a buzzkill.

"I am always on the rookies and all the young guys about being smart and I go out there and make a stupid mistake in a crucial situation in the game. I have to be better than that. It hits you in the stomach," Miller said. "One thing about it, I always bounce back and learn from mistakes. But I killed the game."

The Bills gorged minutes, then seconds, holding the ball for 16 plays and 53 yards. They siphoned 7 minutes and 30 seconds off before kicker Steven Hauschka booted his fourth field goal. The chip shot increased the Bills lead to 26-16 as Denver took over with 3:09 remaining.

"We have to make turnovers if you are going to win on the road," cornerback Chris Harris Jr. said. "We didn't make enough plays."

It was certainly not enough time for an offense that spent the second half blending teasing potential with maddening mistakes, in particular, a head-shaking fake punt by De'Angelo Henderson. Trevor Siemian fired two interceptions, both ill-advised and unnecessary given the time and place on the field. The last proved fatal. He scrambled wide right under pressure and threw off his back foot. It became a gift to Tre'Davious White. The turnover set up Miller's overture gone horribly wrong.

"Those two interceptions can't happen. The defense bailed us out once," said Siemian, who completed 24 of 40 passes but only nine after halftime with two picks. "You can't do that at home or on the road."

The game began like so many, but dramatically different. Denver started well as it has done so far this year. But the focus narrowed before the game. The majority of Broncos' players took a knee and locked arms as a response to President Trump's comments about his desire for NFL owners to "fire" players who protest the national anthem.

"I would never call you a name for having different beliefs than me. We can all co-exist. As a sports team that's what we do best. We have guys from all different walks of life, different cities and upbringings, and we all co-exist," linebacker Brandon Marshall said. "We can all be in the same locker room with different beliefs and talk about it and not bash somebody for their beliefs."

The Broncos entered Sunday with swag and confidence. They had never trailed this season. It symbolized a team that had played two home games and owned a more prolific offense. The Broncos jumped out to a 3-0 lead Sunday, continuing to distance themselves from last season's opening failures when they scored an NFL-worst 40 first quarter points. The Broncos drove 53 yards before fizzling on the 11th play. Brandon McManus, looking to shake out of a mini-slump, drilled a 38-yard field goal to shove the Broncos ahead with 49 seconds remaining in the first quarter.

Under former Broncos offensive coordinator Rick Dennison, the Bills responded. Buffalo adjusted its protection after an opening drive sack by Miller. Taylor connected on a pair of 28-yard completions to Kaelin Clay and Andre Holmes, exposing vulnerabilities in the matchup zone. Taylor, mobile and athletic, succeeded in buying time. He completed the Bills' response with a 2-yard completion to Holmes, who shed the coverage of Bradley Roby in the back of the end zone. It represented the first time the Broncos had trailed this season.

A reactionary attack last season, the Broncos looked to punch back rather than act as a punching bag. It took only three plays to reach the end zone, a drive fueled by silliness. C.J. Anderson burst off the right side behind mauler Ron Leary. He collected 32 yards, his longest run of the season, and added 15 more as an accessory thanks to a foolish late hit by safety Micah Hyde. Jerry Hughes, seemingly impressed with Hyde, collected a roughing the passer flag. Then came a sight as welcomed as it was unusual. Jamaal Charles, the longtime Kansas City star, scored his first touchdown as a Bronco, scampering 12 yards on an inside trap play.

It provided Denver a 10-7 lead, but no advantage felt secure on a humid, muggy afternoon in western New York. Mistakes, so absent in the first two games, surfaced periodically.

A penalty on punt coverage led to a 37-yard net loss, leading to a Hauschka field goal. And mental lapses and zone coverage contributed to the first of a pair of too-easy scoring marches. The Bills motored 38 yards in 41 seconds as Shady McCoy found soft spots right before halftime.

The 13-13 intermission headlock benefited Buffalo. The Bills are a team seeking relevance. Keeping the Broncos close gave them a target to punch, exciting a rowdy crowd of 68,865 fans at New Era Field.

Denver regained the lead on its first second half possession. But it felt hollow, a drive dissolving into a short McManus field goal of 28 yards. Field goals were incapable of winning this game based on Taylor's mobility. He played quarterback like a point guard, fooling the Broncos, especially safety Justin Simmons.

Blink, and they were in the end zone. It took four plays as the Bills navigated 69 yards. Taylor demonstrated the drive and dish to perfection, luring in the coverage before tossing to a wide open Charles Clay on a six-yard go-ahead score.

The Bills held a four-point lead, creating a desperation and clumsiness not seen by the Broncos until Sunday.

The fake handshake sealed the game. But, in truth, the Broncos never had never had a strong grip.

"On the road, you turn it over, it's hard to win. They have great players on that defense," left tackle Garett Bolles said. "They were ready to play, We have to move on, and find a way to get better."