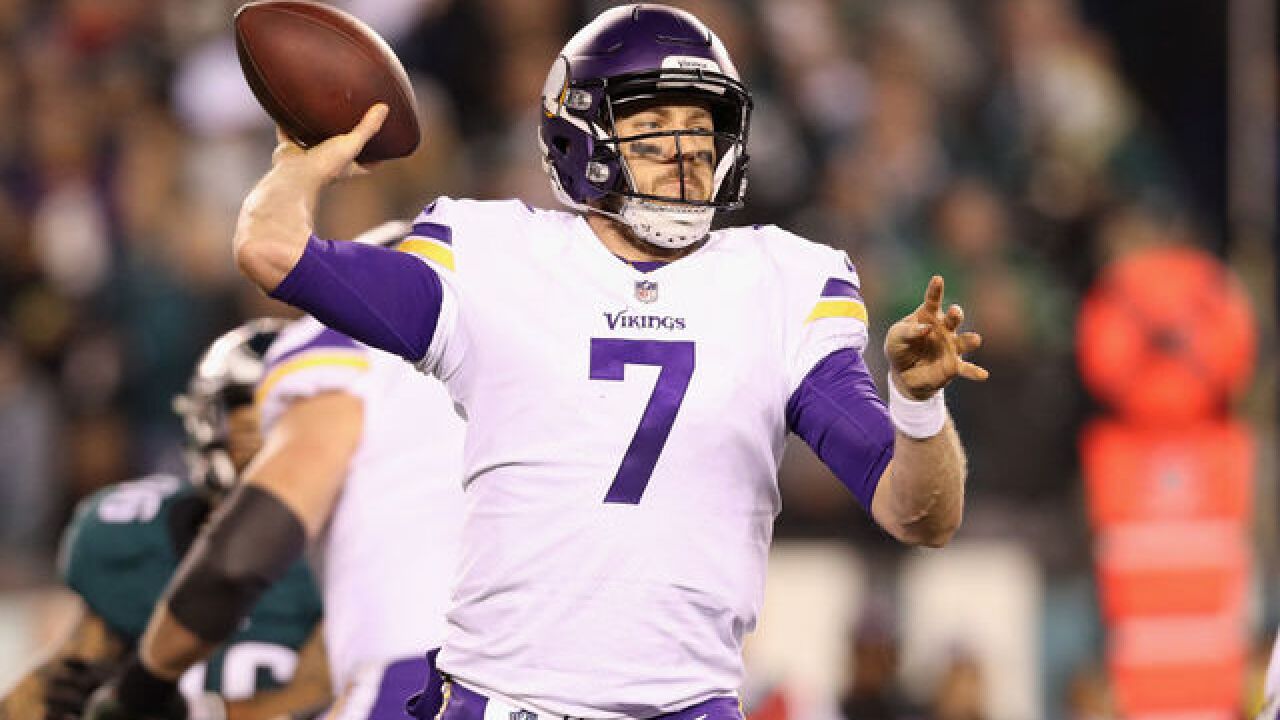 DENVER -- The search for a quarterback comes in all shapes, sizes and directions.

The Broncos began the offseason with all options open. They liked Kirk Cousins, but quickly pivoted in a different direction. They signed Case Keenum to a two-year deal for $36 million. He will be their starter. No more "Decision" during training camp. Goodbye, American Idol auditions. However, the Broncos are dating Keenum. They are not married to him.

The term of the contract allows for the Broncos to add more pieces, and even draft a quarterback if they fall in love with one of the top prospects. According to Pro Football Talk, $25 million is guaranteed at signing. The entire deal is guaranteed for injury, and he can trigger $2 million in incentives.

“Case is a great fit for us. He’s coming off a tremendous season last year and has obviously been through a lot of situations throughout his entire career," Elway said. "Along with that experience, his leadership and competitiveness are what you look for in a quarterback. Case has fought and battled for everything that he’s earned in the NFL, and it’s exciting to add someone with that type of mentality to our team.”

Keenum will be introduced at a 10 a.m. press conference Friday at Broncos headquarters.

Keenum, who turned 30 last month, began last year as a journeyman, a safety net in Minnesota for the oft-injured Sam Bradford. When Bradford hurt his knee, Keenum bathed in the spotlight, producing a career year. He threw for 22 touchdowns and seven interceptions, while showing the edge that has defined him throughout his journey through high school, college and the pros.

"Case is perfect for our team, both as a player and as a person. He’s playing the best football of his career right now and has gotten better with every opportunity he’s had. Being around him in Houston, Case is a tremendous person and teammate with strong leadership skills and a terrific work ethic," Broncos coach Vance Joseph said. "He’ll be great in our locker room, and we’re all looking forward to having him as a Bronco.”

Keenum posted a 12-4 record, winning a playoff game with the "Minnesota Miracle" touchdown to Stefon Diggs before falling to the eventual champion Eagles in the NFC Championship game. It was a jarring transformation after he went 9-15 in as a starter in previous stops with the Texans and Rams. Keenum bid farewell to Vikings fans on Twitter on Wednesday.

"From the bottom of my heart, thank you Minnesota. Some of the most incredible, crazy, miraculous moments of my life happened this past year," Keenum said. "Couldn't (have) happened without y'all. Made this Texas boy feel right at home."

While multiple Broncos players campaigned for Kirk Cousins, they have warmed to Keenum, who had an advocate in adviser and former coach Gary Kubiak. The players understand his signing represents an upgrade -- at $10 million less per season than Cousins -- while leaving flexibility to address other needs.

All-Pro linebacker Von Miller praised the addition, declaring on Instagram, "Looks/Feels right to me! We got what we were looking for! Franchise QB that's the perfect fit for Denver. @JohnElway with the deep 3-pointer! Like Always. Leeettttss Gooo!!! Time for me to hold up my end of the deal now."

Linebacker Todd Davis told Denver7, "I am excited. I think he's a great fit. It's time to get that ring."

The Broncos suffered many issues during a dreadful 5-11 season. It started with turnovers as the quarterbacks threw 22 picks, second only to the Cleveland Browns. If Keenum can match last year's production, it would go a long way in helping the Broncos avoid back-to-back losing seasons for the first time since 1972.

"Hopefully he comes in here and balls," cornerback Chris Harris Jr. said to Denver7. "We need a playmaker."