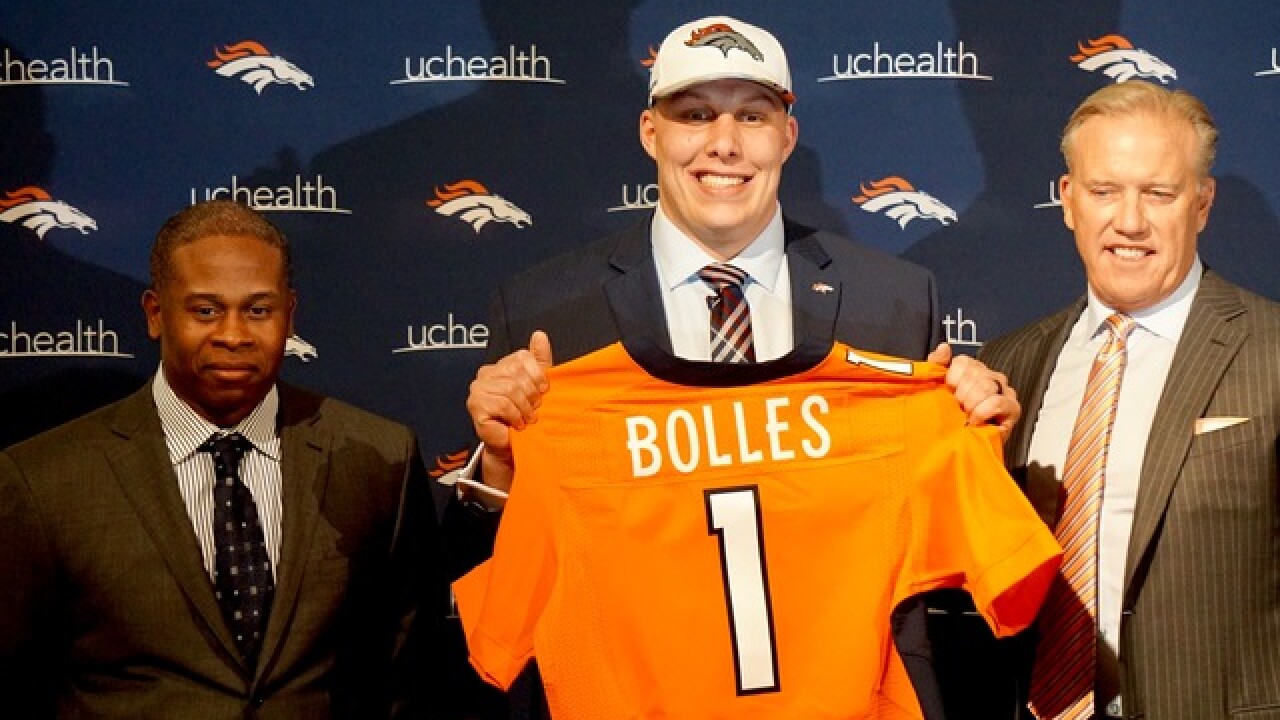 DENVER -- The No. 5 sits out of place at Dove Valley. The Broncos are not a first scoop of the NFL draft ice cream kind of team. They go to Super Bowls -- seven in the last 34 years. They win championships -- three, including one two seasons ago.

The calendar insists it is 2018, a lifetime ago, it seems from Super Bowl 50. The Broncos' regression morphed from an aberration to a concern, a missed playoff berth to a 5-11 forgettable season stuffed with more dramatic highs and lows than Elitch's Mister Twister. It left them with the No. 5 overall pick.

Looming over the the rubble of 2017 is the flashing sign of the NFL draft, where the correct picks can accelerate a makeover. The Broncos need a starting quarterback, perhaps you have heard. They also need an infusion of young talent. Not only do kids provide energy, they show hunger and balance the payroll as cheap labor. They remain invaluable to sustaining success.

Which brings us to the Broncos. Among last year's issues -- talent, leadership, overall offense and change-of-possession defense -- the missing draft class stung as deeply as almost any shortcoming. As ineffectiveness became a trend, the young players, save for spurts of left tackle Garett Bolles, amplified the problems rather than solve them.

My Cliffs Notes review by round as the NFL combine lurks around the corner next week:

1. Garett Bolles, LT: Started 16 games, showing toughness while playing through an ankle injury. He received a baptism by blowtorch against elite pass rushers. Bolles tied for second among the NFL's penalized players, continuing a college trend. He was called for 15 fouls, 12 accepted, including 10 holding calls. Bolles has the talent, edge and drive to improve. I expect him to develop into a solid starter. The six quarterback changes did not help him, with each signal-caller possessing different traits in the pocket.

2. DeMarcus Walker, DE/OLB: My most disappointing draft pick. I expected him to work quickly into the defensive line rotation as a situational pass rusher. Instead he moved to outside linebacker following Shane Ray's left wrist injury. As the season began, Walker suffered food poisoning. He began dropping weight and it continued with a nutritional plan. He plummeted to roughly 240 pounds after playing at 272 in college. It proved disastrous. Following the draft, Walker should know his future position. I would move him back to defensive end with added bulk. He could play a critical role if the team moves on from Derek Wolfe.

3. Carlos Henderson, WR: A six-week thumb injury became a lost season on injured reserve following preseason surgery. He was arrested last month for marijuana possession, a brutal misstep. Henderson has the physical tools, but must demonstrate a better grasp of the pro offense to see the field and earn the coaches' trust. The Broncos desperately need a third option in the passing game.

3. Brendan Langley, CB: A project when drafted, Langley dripped potential as a big, fast cornerback who had never played the position full time. He struggled mightily to improve, and was exposed against Oakland after Aqib Talib's ejection. Free agent Marcus Rios passed Langley on the depth chart. Langley, in my opinion, will need a strong training camp to make the team.

5. Jake Butt, TE: He can brighten the view of last year's rookies along with free agent gems Jamal Carter, Dymonte Thomas and Rios. Butt missed last season while recovering from his second ACL surgery. He shows shimmy at the top of routes, suggesting he will become a red zone threat. His emergence would change the complexion of the entire offense.

5. Isaiah McKenzie, WR: No rookie symbolized the struggle of the 2017 class more than McKenzie. He fumbled five punts and failed to run out of bounds before half at Washington, costing the team three points. He showed accountability at season's end, but it was too late. He receives no benefit of the doubt. He faces a huge challenge to stick on the roster.

6. De'Angelo Henderson, RB: Flashed potential in training camp, then fumbled in the preseason and became a ghost in a uniform. Finally given a chance at season's end, he scored on a screen pass that prompted the question of why he and that play were not used earlier. With C.J. Anderson's future uncertain at best, Henderson could return with a bigger role, but it hinges on the draft. The Broncos have been linked to Georgia's Sony Michel and Oregon's Royce Freeman.

7. Chad Kelly, QB: Kelly took to his redshirt season, recovering from multiple injuries, while dropping 20 pounds and learning the nuances of the playbook. It's impossible to predict what his chances are of making the team until the Broncos sign a starter or draft one. If nothing else, I would like to see Kelly in the preseason. He plays with bravado. Can that translate to the pro game?