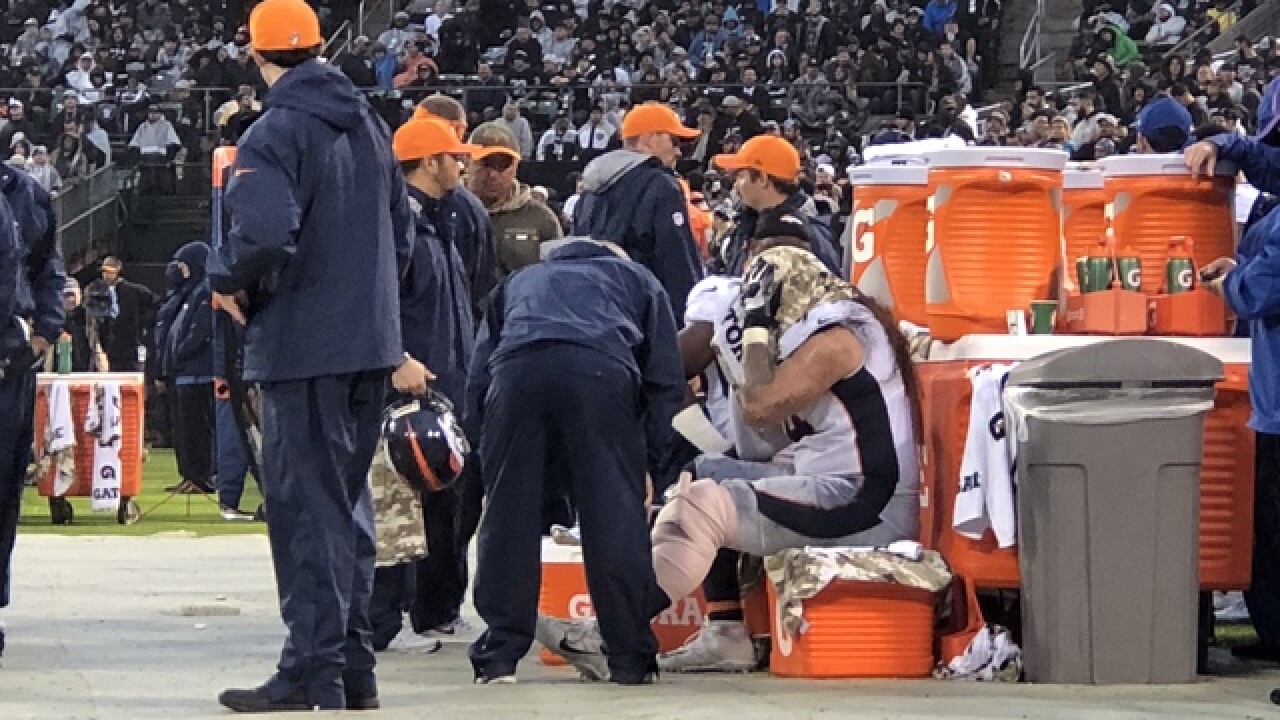 OAKLAND, Calif. -- What happened Sunday in soggy Oakland assaulted the senses, but did not strain the imagination.

We've seen this movie before. It's been playing on loop for seven straight weeks, only the fists and ejections making this 21-14 loss to Oakland more remarkable than the previous six. It's the kind of game that calls into the employment of coaches and players moving forward.

The Broncos entered their 11th game Sunday starting their third quarterback and using their second offensive coordinator. But it was two chains -- or is it 2Chainz? -- and a single display of offensive ineptitude that defined seventh-straight loss, the franchise's longest skid since 1967.

The Broncos fought during the week. And on Sunday. Aqib Talib renewed his rivalry with Michael Crabtree, swiping his gold chain for the second straight season. Crabtree went ballistic, blocking and tackling Talib out of bounds, instigating a brawl that led to their ejections. While it was entertaining, it amounted to little more than a diversion from the weekly dose of ugly and pain.

Broncos players blamed Crabtree. He punched Chris Harris in the stomach. Then the next play he slugged Talib, and the two got physical, trading punches and swiping chains.

Denver promised a new-look offense with Paxton Lynch making his season debut. It lasted for three clumsy quarters before Lynch exited with a right ankle issue. He left the locker room in a boot and will undergo an MRI on Monday along with  Derek Wolfe (neck) and Domata Peko (left knee, pictured above) left with injuries. Lynch shed tears over the pain, his performance awful after a 20-yard touchdown to Devontae Booker was ruled down at the 1-yard line. Lynch followed with a pick that bounced off Virgil Green, Reggie Nelson and pawed with one hand on the ground by NaVorro Bowman. It was Oakland's first interception of the season.

"I was frustrated with having another injury after just recovering from an injury," Lynch said. "I was upset that I didn't get to finish the game with my team."

Sunday illuminated the contrast between the teams. The Raiders fired coordinator Ken Norton Jr. and the defense delivered its finest performance. The Broncos fired coordinator Mike McCoy, and the offense looked as helpless as ever. Lynch finished with nine completions in 14 attempts for 41 yards and was sacked four times (Oakland entered with 15 sacks).

If nothing else, Lynch's display fueled speculation that the Broncos' quarterback of the future is not on the roster. Trevor Siemian entered in relief and prevented Denver from being shut out twice in the same season for the first time since 1992. He connected with Cody Latimer on a 25-yard pass in the fourth quarter and followed with a scoring strike to Bennie Fowler. It only provided a brief balm for this two-month long migraine as the Broncos took a risk on third down in coverage, allowing an easy first down against struggling rookie cornerback Brendan Langley.

Again, it's not that Denver is losing. It's how. Of their seven-straight losses, five have come by double digits. The Broncos had 54 yards offense on at halftime. They have been outscored in the first half during this skid 133-31. The truth is in the numbers. The Broncos are not very good. And when they do show promise, one loose thread is pulled and the entire team unravels.

Denver showed fight Sunday. But it led to Talib's ejection. Talib and Crabtree scrapped, sparking a brawl that led to their ejections. Joseph criticized Talib's actions, and the fallout will be interesting since the players sided with the All-Pro cornerback. These type of moments that can define or undermine Joseph going forward. General manager John Elway gave him a vote of confidence, but no one can feel safe given the stench of this losing streak.

As for Talib, Joseph was blunt in his assessment.

Crabtree and Talib are, um, linked in history.

The tension traces back to the final game of last season. Talib took exception to Crabtree in general and his gold necklace specifically. On a passing route down field, the pair jawed and Talib ripped off Crabtree's chain. He delighted in the act afterward.

Crabtree wasn't exactly bedazzled. After missing the Oct. 1 meeting with an injury, Crabtree faced Talib for the first time. One play after Chris Harris Jr. was punched, Talib and Crabtree engaged in a blocking match that turned ugly as Talib appeared to pull off Crabtree's chain again. Crabtree lost it and tackled Talib to the ground as the players fell out of bounds. A brawl ensued on the Broncos sideline. Talib and Crabtree sprung loose from the pack, and squared off near the goal line. Talib threw a punch at the helmetless Crabtree, missing with his fist but striking the receiver's face with his elbow. Crabtree responded by poking Talib in the eye. Peko eventually separated the players.

Talib and Crabtree were ejected. Oakland's Marshawn Lynch escorted Talib to the locker room tunnel to avoid any more trouble. Crabtree entered a few minutes later, and hopefully the two remained in separate corners. Oakland offensive lineman Gabe Jackson was also tossed for making contact with an official. With Talib gone, Brendan Langley was exposed in coverage, allowing a touchdown to Amari Cooper.

Talib responded in a similar manner last season at Tennessee after receiver Harry Douglas cut blocked Harris. A melee broke out on the next play, and ended with Talib saying afterward he would fight Douglas if he saw him in the offseason.

When the Broncos lost at Tennessee, they had hope. This team, at this point, is playing for a top draft pick.

"Wasting a prime year, that's the frustrating part," Miller said. "We have to just go out there and play. "