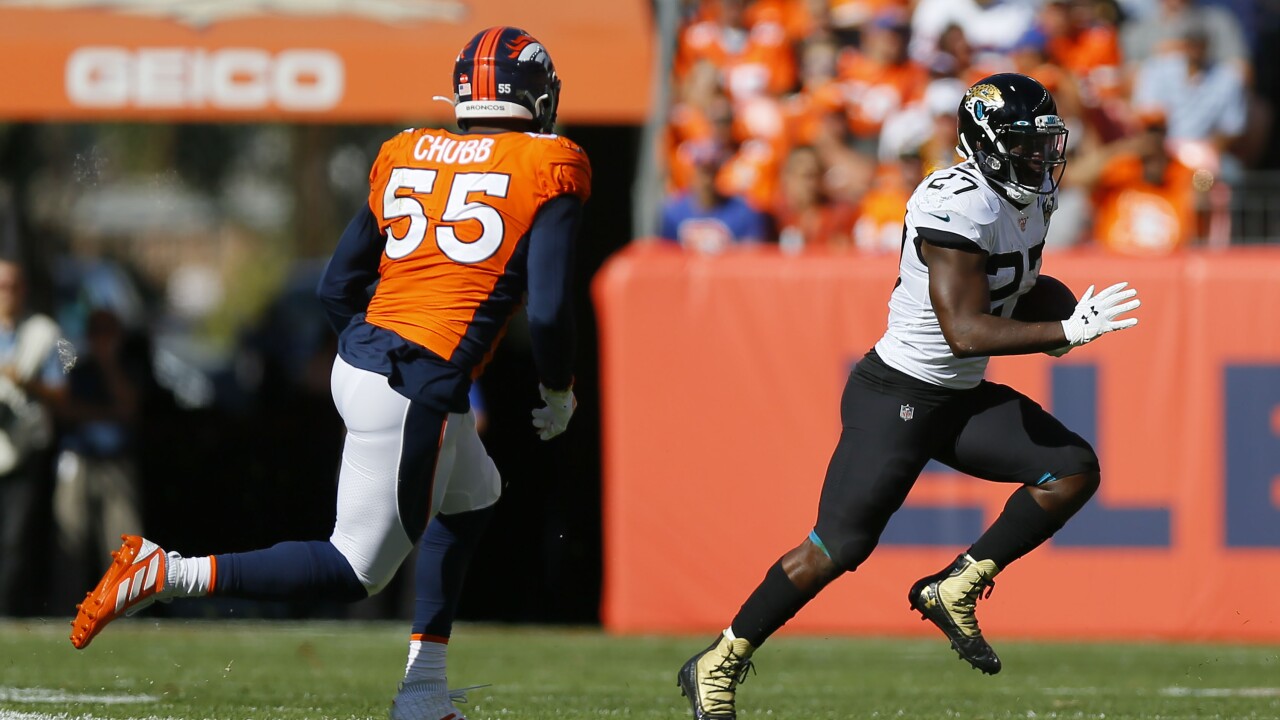 ENGLEWOOD — No longer is the offense the reason the Broncos can't win. The defense has its own issues. After the Jaguars manhandled the Broncos last Sunday, Denver ranks last in takeaways, and sits among the league's worst against the run.

Denver owns an eight-game losing streak. The Broncos last triumphed on Dec. 2 at Cincinnati. That will not change in Los Angeles, where the Broncos are 6.5-point underdogs, without an inspired, if not dramatically improved effort defensively.

The Broncos, simply put, are not playing with enough physicality.The Broncos missed too many tackles last week, and appear to to be reluctant to deliver big hits. Jacksonville's Leonard Fournette shredded Denver, posting 225 of Jacksonille's 269 yards on the ground. The Jaguars averaged 7.1 yards per rush.

As a result, the Broncos limp into California with a clear weakness: They rank 30th against the run, allowing 149.5 yards per game. Opponents know it. They have run the ball, on average, 30 times a game against the Broncos, sixth most in the NFL. Why wouldn't they when they are logging 5.06 yards per attempt (third worst), and have scored five touchdowns (fourth worst)?

"It was like three or four plays if we could have back, that game last week would have been totally different. Fournette is a great back. He's hard to tackle one-on-one," said Broncos All-Pro linebacker Von Miller, who passed on a question to discuss his 12-second press conference last week. "We have to find a way to get the back to the ground. The Chargers have great backs as well. Hopefully, we have a better outing."

An argument can be made that Jacksonville held on several plays. However, this claim exists in games across the league every week. This is no time for excuses. It's time for improvement. And pulling it off against the Chargers figures to be about as challenging as avoiding sand in shoes during a day at the beach.

"We've got a tough task with those two running backs (Melvin Gordon and former Eaton High and Western State star Austin Ekeler). With Gordon coming back, I feel like they’ll definitely try to feature him and get him the ball, so we’ll be ready to go," linebacker Todd Davis said. "Those two losses where we had the chance to win the game and we didn’t, that’s not like us. We definitely have to find the answer, we haven’t found it yet, we’re still working on it, we’re still working on ourselves as a team as a whole and definitely as a defense. We’re going to keep working until we get it right, but we’re going to find the answer.”

The Jaguars made a halftime adjustment, going with a jumbo package of linemen that gave the Broncos fits. Given its success, the Broncos expect to see it again Sunday in the soccer stadium the Chargers call home for a final season.

So what went wrong last week?

"Everything. They were blocking us good up front, we were missing tackles out of the secondary -- corners and safeties at times. Basically, we were just getting blocked and the good back had some room and some softness to run through, and he did," Fangio said. "Our run defense went south pretty much starting with the second drive in the second half.”

The Broncos could choose to load the box with an eight-man front, trusting the corners in man coverage. That will be easier to do if Kareem Jackson plays. He's trending in that direction after missing last week with a hamstring injury. Regardless, the Broncos need to play with more force and instill more fear.

"That's a good question. We can do some things scheme-wise, put more pressure on his on the outside," cornerback Chris Harris Jr. said. "Or guys just play better within coach Fangio's scheme and what he wants us to execute."

Footnotes
Broncos right tackle Ja'wuan James will continue practicing this week on a limited basis. The target return date from his sprained left knee is next week against the Titans. ... Rookie quarterback Drew Lock is no longer wearing a brace or protective tape on his injured right thumb. He can begin practicing after the sixth game and is eligible to return after the eighth week. ... Josey Jewell (hamstring) could miss this week's game, placing pressure on backups Justin Hollins and potentially Alexander Johnson to step up. ... Broncos running back Phillip Lindsay on the mentality of the locker room after an 0-4 start. "Right now, like you said our backs’ against the wall and now we have to go at it. We have to go at it hard. Nothing changes. We’ve been having great practices. We just need to make a couple plays here and there. That’s the NFL for you though. A couple more plays here and there and we’re on the other side of it. We just have to find a way to win.” ... I asked Broncos offensive coordinator Rich Scangarello about mixing in more uptempo given the team's success in the two-minute drill. He said it's not feasible because of the lack of depth at receiver and the need to help keep their own defense off the field. .... One thing is clear: the Broncos view rookie right guard Dalton Risner as a cornerstone player and leader well into the future.