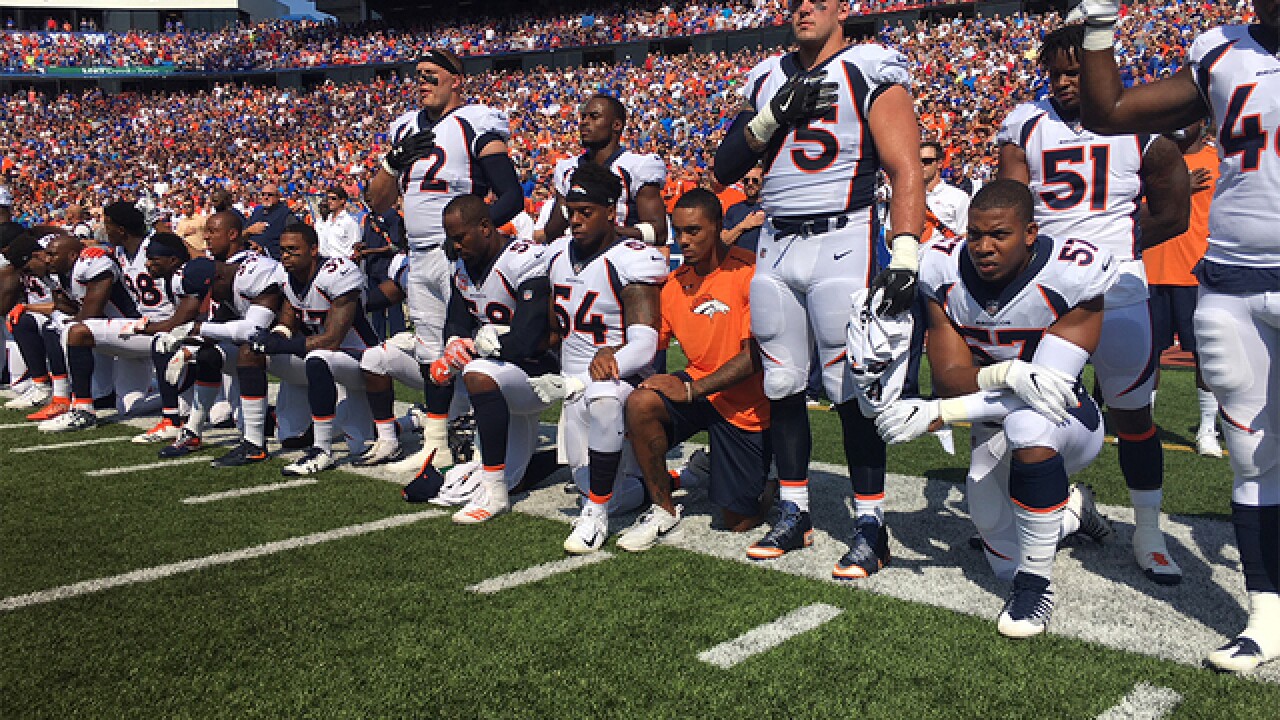 ORCHARD PARK, N.Y. -- President Trump singled out NFL athletes on Friday, telling owners they should "fire" any player who kneels during the national anthem, while encouraging fans to walk out of stadiums.

The NFL players responded with a clear message on Sunday, protesting through a variety of methods before their games. Only 19 Broncos players stood for the anthem before their game against the Buffalo Bills, according to Denver7's count. Multiple sources told Denver7 those kneeling were responding directly to Trump's remarks before an audience in Alabama on Friday.

Among those protesting ahead of the game Sunday were star outside linebacker and Super Bowl 50 MVP Von Miller, who not only knelt but locked arms with inside linebacker Brandon Marshall.

Added Marshall, who took a knee for eight games last season to promote awareness of social injustices, "It's hard because I am sure a lot of us took it personally. Some of the guys came and talked to me and said they were ready to do it. I think we all took it personally."

Marshall told Denver7 he remains unsure if the protests will continue. This reaction was in direct response to Trump's words.

Wide receiver Demaryius Thomas and defensive end DeMarcus Walker were also kneeling, and rookie left tackle Garrett Bolles was seen placing his left hand on Miller’s shoulder as he stood during the national anthem in a show of solidarity.

Among those standing during the national anthem were coaches Vance Joseph and Mike McCoy, placekicker Brandon McManus, quarterback Trevor Siemian and quarterback Brock Osweiler, as well as running back CJ Anderson and defensive end Derek Wolfe.

Speaking to ESPN's Josina Anderson before the game on Sunday, Wolfe said he did not kneel "because I respect the men who died in real battles so I have the freedom to battle on the field."

Wolfe added he respects everyone's rights to protest and to speak their mind, but feels "it's disrespectful to the ones who sacrificed their lives and it's the wrong platform." His full statement is below:

NEW: Statement to me from #Broncos DE Derek Wolfe on Donald Trump's comments regarding national anthem protests in the @NFL. pic.twitter.com/4qWLXNhbSK

After the game, Wolfe told Broncos Insider Troy Renck about his stance regarding the league-wide protests on Sunday.

NFL players — Broncos or otherwise— also held their fists up in the air.

Outside linebacker Shaquil Barrett was seen with his fists up in the air.

Here's a list of some of the #Broncos players @AlisonM_TV saw #TakeTheKnee (and also standing) during the national anthem. #DENvsBUF pic.twitter.com/sPCcEg4o0H

Receiver Emmanuel Sanders was among the most vocal on social media, saying he initially encouraged his relatives to give Trump's presidency a chance, but now he is "highly disappointed" in Trump and that his words were "intolerant and inhuman."

"Our players have shown a tremendous commitment to raising awareness for important societal issues by using their platform in a positive way. In addition to their hard work off the field, we have great admiration for their dedication to making our team the absolute best it can be. They've made incredible sacrifices to reach this level, and we recognize they give their all to our team and fans each and every day," Ellis said. "As an organization, we could not be more proud, appreciative and grateful for our players. We'll continue to support them and work together to advocate for values of respect, diversity and inclusion."

Prior to Sunday's game, Wolfe told ESPN he would stand for the anthem, which he did, as a way of "paying tribute to the men and women who have given their lives for our freedom," while adding, “everyone these days likes to find a reason to protest and that’s their right.”

Trump's comments trace back to last season when current free agent quarterback Colin Kaepernick began kneeling in the preseason during the anthem to raise awareness for social injustice.

Trump weighed in on the issue on Friday, triggering an emotional response by a large number of players.

“(Kneeling) is a total disrespect of our heritage. That’s a total disrespect of everything that we stand for,” Trump told a rally Friday in Alabama, where he was campaigning for Republican Sen. Luther Strange. "Wouldn't you love to see one of these NFL owners, when somebody disrespects our flag, you’d say, ‘Get that son of a bitch off the field right now. Out! He’s fired."

NFL commissioner Roger Goodell answered, saying Trump's words demonstrated "a lack of respect for the NFL, our great game, and all of our players."

Broncos offensive lineman Max Garcia, in response to Trump's remarks, tweeted Saturday,  “where was this passion in response to Charlottesville.” Garcia was among the majority of Broncos players who took a knee during the anthem.

As the games kicked off, Trump responded to the controversy via his Twitter account by standing his ground and saying in part, "kneeling is not acceptable."

Great solidarity for our National Anthem and for our Country. Standing with locked arms is good, kneeling is not acceptable. Bad ratings!

Courageous Patriots have fought and died for our great American Flag --- we MUST honor and respect it! MAKE AMERICA GREAT AGAIN!

Sports fans should never condone players that do not stand proud for their National Anthem or their Country. NFL should change policy!