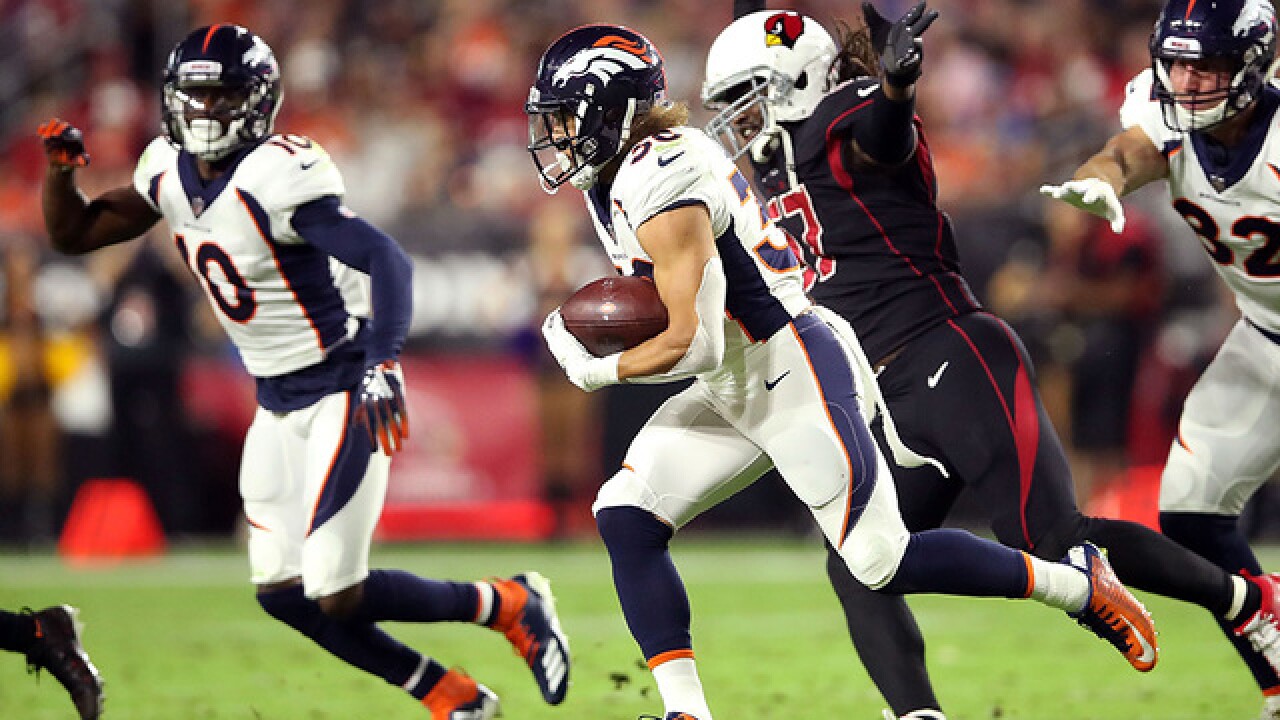 Copyright 2018 Scripps Media, Inc. All rights reserved. This material may not be published, broadcast, rewritten, or redistributed.
Christian Petersen
<p>GLENDALE, AZ - OCTOBER 18: Running back Phillip Lindsay #30 of the Denver Broncos runs past linebacker Josh Bynes #57 of the Arizona Cardinals during the second quarter at State Farm Stadium on October 18, 2018 in Glendale, Arizona. (Photo by Christian Petersen/Getty Images)</p>

The Cardinals heard him and responded thusly: "OK, sounds good."

Unleashing a month's worth of frustration, the Broncos delivered speed bag punches off the Cardinals' chin in one of the most impressive opening flurries in franchise history.

Denver won 45-10 Thursday at State Farm Stadium, unclenching the fist and extending the plank for coaches, if not players.

"I knew my teammates believed in me," Miller said.

Challenged by their star player to deliver, the Broncos showed aggression and creativity not seen since the salad days of Peyton Manning. They had his back, and put the Cardinals on their back with haymakers.

"When you leadership steps up publicly it's one thing. But he came to us as players first and said, I am going to say 'We are going to kick their ass,'^" said rookie Bradley Chubb, who netted two sacks. "He told us in the meeting room. The coach was talking and he said, 'hold up. I am thinking about saying this.' That actually happened. So from jump we knew his mindset and we just wanted to match his intensity."

The Broncos entered Thursday averaging 20 points per game. They posted 21 in the first quarter, their most on the road since 1973 at the New York Jets. They scored 35 in the first 30 minutes, equaling a total last reached in 2010 vs. the Chiefs. Their 32-point halftime lead represented their largest ever on the road. Will it matter next week at Kansas City? Not necessarily, but Denver needed a victory, and a reason to believe.

"It's hard to have confidence without results," Joseph said, dismissing that he personally needed this win, insisting the "team" is what's important. "It's hard to win in this league. This should give us confidence."

The onslaught began with an old friend not seen regularly since the Super Bowl triumph season. Linebacker Todd Davis secured an interception off a Derek Wolfe deflection of rookie Josh Rosen's pass, racing 20 yards into the end zone. The partisan Broncos crowd -- you read that right -- went bonkers.

The Broncos were just getting started. Emmanuel Sanders followed with a 28-yard touchdown toss to rookie Courtland Sutton on a reverse. Sanders became the fifth receiver since 1970 to record a receiving, rushing and passing touchdown in the same season.

"It's SMU Pass Right," said Sanders of his shared college connection with Sutton.

After an Arizona field goal, the Broncos continued to rattle Rosen. Cornerback Chris Harris Jr. jumped a route -- why the Cardinals would pass to anyone by Larry Fitzgerald on third-and-1 remains a mystery -- and zig-zagged 53 yards for a touchdown. Consider Pick 6 the Broncos' number in the Mega Million jackpot.

Nothing like a Mike McCoy offense to rejuvenate an opponent's defense. Joseph fired McCoy after 10 games last season, and McCoy's Wikipedia page suggested he would be fired in Arizona on Friday after the Cardinals latest dreadful performance.

The Broncos capitalized on the gifts by reuniting with a stranger. Hello play action, my old friend. Broncos pulled out the play-action bootleg (something I have been pleading for the last two weeks). Arizona bit hard on the run as quarterback Case Keenum connected with a wide open Sanders on a 64-yard touchdown. Sanders eschewed the finger-wagging celebration for a front flip. The Broncos fans were all but doing cartwheels. A 1-yard plunge from rookie Royce Freeman capped the first-half onslaught.

It was odd, this comfortably numb feeling on the Broncos' sideline.

The Broncos had lost 11 of their previous 12 road games, outscored 200-72 in the first half during that stretch. The first 30 minutes arrived after a week of fury and fire. General manger John Elway called his defense soft after allowing 593 rushing yards in back-to-back games, and said, "We are fighting for our lives." Miller responded with his prediction, and the embattled Joseph, said the "city is on fire. We get it. We need to win."

Miller backed up his boast with a disruptive game. Midway through the fourth, after Phillip Lindsay provided a 28-yard score, Denver had four sacks, five tackles for a loss and eight quarterback hits. Miller owned two sacks, two forced fumbles and four knocks on Rosen.

The Broncos rush defense also regrouped, holding the slumping David Johnson to 39 yards on his first 14 carries, while eliminating the gash plays. Cornerback Bradley Roby, blistered this season too often, delivered his best game, and netted a pick.

Thursday represented a panacea, a night of joy at awful Arizona's expense. The Broncos need not apologize for any win. Now, the hard part. Making it matter as they attempt to regain traction toward a playoff berth.

"When you leader says, 'We are going to whoop somebody's butt, you better come ready to play," Davis said. "That not only influences our locker room but their locker room. It felt better. It felt good, like the 2018 Broncos defense. Who we are and who we could be."

The win came with a cost. The Broncos lost receiver DaeSean Hamilton to a knee injury as he was victim of unnecessary shot on a fair catch. ... Safety Darian Stewart left with a stinger, the same issue he had last week, forcing Shamarko Thomas into the game. ... The Broncos have had five games where they returned two picks for touchdowns, the last in 1989 from Randy Robbins and Tyrone Braxton. ... The last Broncos player to record a passing, receiving and rushing touchdown in season was Bobby Humphrey in 1989.