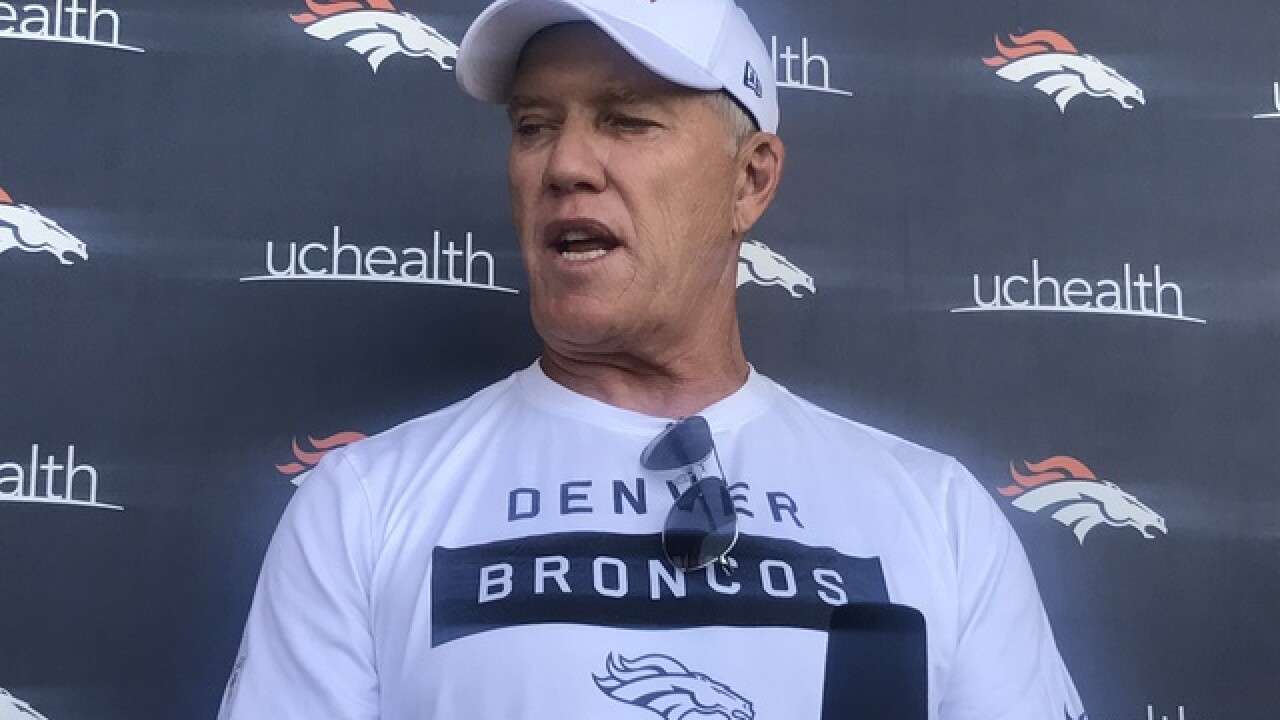 ENGLEWOOD, Colo. -- John Elway wants better. The Broncos averaged 18.1 points per game last season and turned the red zone into the dread zone. They brought in Case Keenum to inspire change. Then came the preseason opener and three-and-out drives returned like a nagging cough.

It was only two series, but it conjured up images of the previous forgettable seasons. While addressing a number of topics Wednesday, including why Colin Kaepernick is not under consideration for a backup job, Elway spoke of a team that must show more pride.

#Broncos Elway responding to the Kaepernick question. Would they consider him as backup #Denver7 pic.twitter.com/27EJD5Dqib

"Fast starts. ... Playing well is more important. A fast start helps that. The (first) game was a little bit of a wakeup call," Elway said. "I would like to see us take a little more pride in what we did. That was a little a disappointing we didn't do that."

A longer cameo should increase the chance for production. The starters are scheduled to play into the middle of second quarter. A touchdown drive would go a long way in turning down the volume of critics. Regardless, Keenum is locked in as the starter, with Elway pleased with his leadership and work ethic. As for his backup, that remains uncertain.

Elway has not ruled out pursuing a veteran after assessing the play of Chad Kelly, and to a lesser degree, Paxton Lynch this Saturday. While Matt Moore, T.J. Yates, Brett Hundley have been linked to the Broncos, Colin Kaepernick won't be coming to Denver.

Elway met with Kaepernick prior to the 2016 season, making a push to acquire him in a trade from San Francisco. It hinged on Kaepernick agreeing to reduce his $11.9 million salary. The Broncos wanted him at $7 million through a pay cut, restructured deal or with the 49ers absorbing part of his money. Kaepernick balked at a reduced guarantee, and San Francisco was unwilling to eat any of the contract. As as a result, the Broncos drafted Lynch, pitting him a competition against Mark Sanchez and Trevor Siemian, won the by the latter.

For now, Kelly sits at No. 2 behind Keenum. Kelly has played one football game in 650 days and taken zero snaps in the regular season. Elway left impressed with Kelly's showing against Minnesota, saying he earned his promotion.

"I had a feeling he was going to play well. He’s a competitive guy, and he took advantage of the opportunity he had," Elway said. "He deserved the chance with the twos this week."

Elway understands the challenge the Broncos face as they attempt to avoid back-to-back losing seasons for the first time season since 1972. The Broncos are 7-15 in their last 22 games, suffering a talent erosion and hurt by underwhelming draft classes unable to fill the void. This year's rookie class creates optimism, including first-rounder Bradley Chubb, who is a starter, receivers Courtland Sutton and DaeSean Hamilton and starting nickelback Isaac Yiadom.

"The preseason is a different animal. It was good for them to a see different helmet (in practices vs. the Bears). We have a lot of young guys we are going to lean on this season," Elway said. "We have to grow up fast. But it needs to be a balance of young guys and veterans."