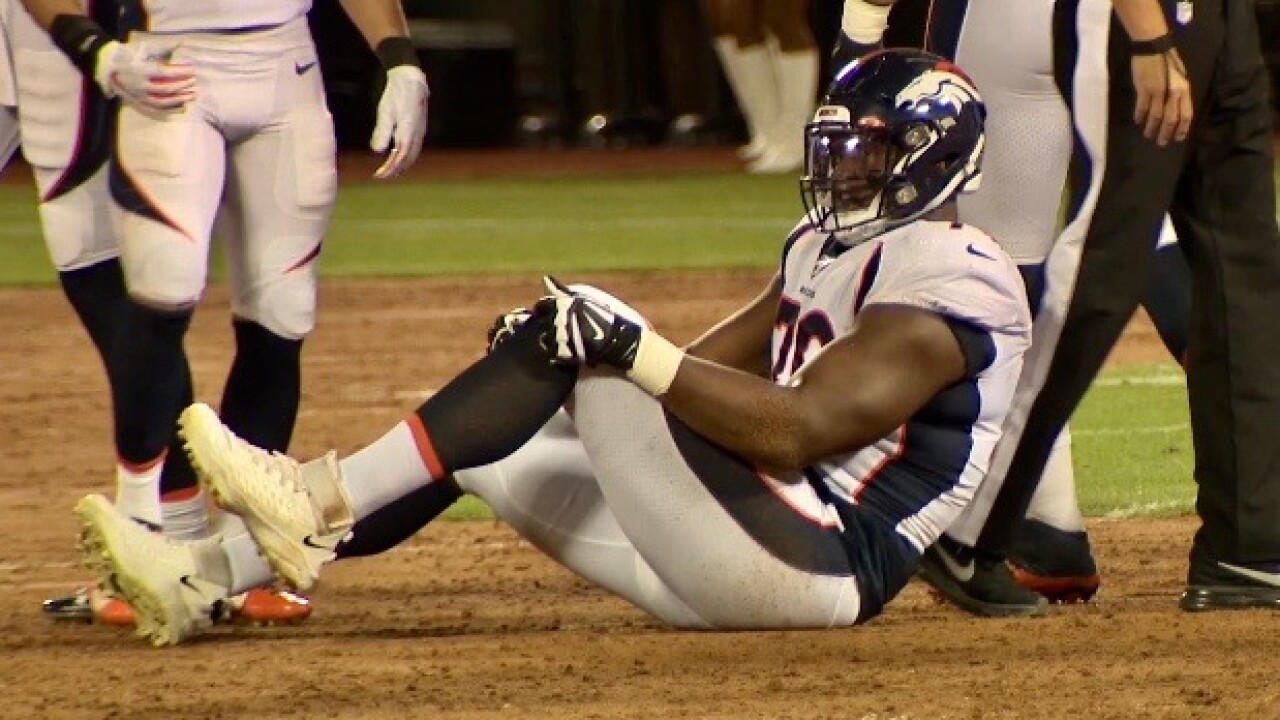 Copyright 2019 Scripps Media, Inc. All rights reserved. This material may not be published, broadcast, rewritten, or redistributed.
Jeff Howe/Denver7
Right tackle Ja&#39;Wuan James will miss several weeks with a sprained left knee that limited him to 10 snaps.

ENGLEWOOD — The Broncos' season-opening loss Monday night was layered. Not only did the Broncos fall to the Raiders, but they lost multiple players to injury.

James continues to struggle to gain traction since the the Broncos made him the highest-paid lineman in franchise history, signing the free agent to a four-year, $51 million deal with a $12 million signing bonus and $32 million guaranteed. The Broncos viewed him as a permanent fixture, ending the carousel at right tackle. However, James has been slowed by minor leg issues. He missed practice time in training camp with a bruised lower leg, and dealt with a hip issue during OTAs.

James sprained his knee on this 10th snap Monday. The Raiders sacked Joe Flacco, and as the pocket collapsed around him, James went down on the infield skin at the coliseum, clutching his left knee. He did not return to the game. Elijah Wilkinson replaced him and struggled initially before settling down in the second half. Wilkinson took significant snaps in the preseason while working with the first-and-second teams, easing concern about his transition to a starting role.

"I have confidence in him. I think he's a damn good player." Fangio said.

Patrick provided energy and attitude on special teams. He exited the locker room Monday night with a soft cast covering his wrist and two fingers, admitting he was unsure of his potential absence. He lands on the IR, and becomes a candidate to return with the short-term designation after eight weeks. The Broncos have multiple players in this category: running back Theo Riddick, quarterback Drew Lock and tight end Jake Butt.

Footnotes
Fangio said cornerback Bryce Callahan (foot) will not practice Wednesday. Team is attempting to accelerate learning curve for Duke Dawson and Davontae Harrris. ... Linebacker Todd Davis (calf) will practice. My expectation is that he plays Sunday, while it seems a reach that Callahan will. ... Vic Fangio on his recall of the Bears acquiring linebacker Khalil Mack. He said he didn't know much about him, "and then when we got him, and it was after a few days, and it was like, ‘Holy (crap).’"