Broncos impress, scoring in all 3 phases against Chicago 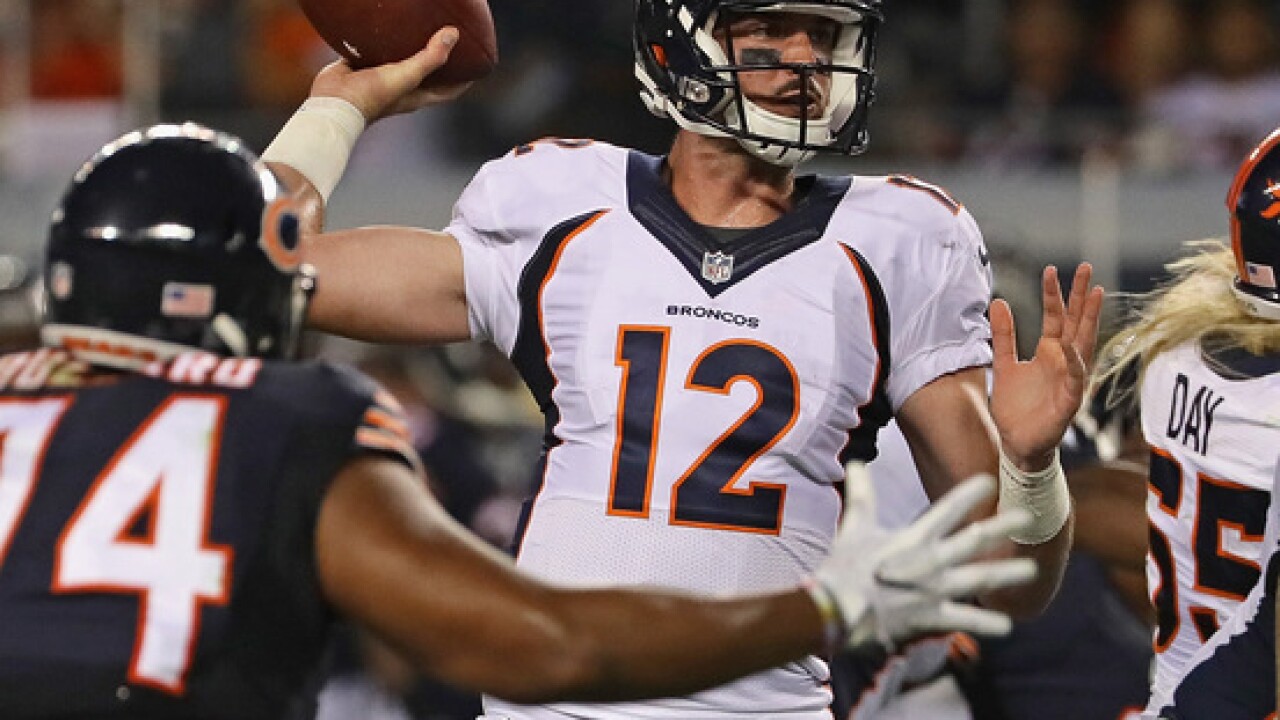 CHICAGO – One and done. Three and doubt.

Consider it an apt description of the Broncos’ 22-0 demolition of the Chicago Bears in the preseason opener at Soldier Field. With Mark Sanchez under center, the Broncos marched down the field on their first possession, punctuated by Demaryius Thomas’ 32-yard touchdown reception. It was the only score required as the Bears’ sputtering offense spent the humid evening aspiring to cross midfield.

The coincidence, if not early effectiveness of Denver’s offense, was striking. The Broncos failed to reach the end zone on their first possession last season until Nov. 22 at Chicago. Brock Osweiler found Thomas on a 48-yard strike to end the skid. The Broncos left that game feeling confident they had unearthed a quarterback. It stretches the imagination to say they pulled it off Thursday, but Sanchez calmed nerves with his strong first-quarter play.

Sanchez finished 10 of 13 for 99 yards, his lone blemish an interception on a deflected pass.

“I thought Mark did really good. He just had the one mistake with the football that we are continuing to try and correct and he knows that,” Head Coach Gary Kubiak said. “The quarterbacks went out there and played like they have been practicing.”

Trevor Siemian countered with a 7-for-12 performance, missing on a 26-yard back-shoulder scoring strike to Bennie Fowler that was stripped at the goal line. Kubiak remained pleased with the progress of both players, admitting he hasn’t decided if Siemian will start the second preseason game against San Francisco. The teams will hold joint practices next week and how that plays out could determine who gets the nod in the game at Sports Authority Field.

And the Broncos, interestingly, have not closed the door on rookie Paxton Lynch playing early in the season. He completed six of seven passes, and moved well outside the pocket. He’s the long shot. That he’s still in the mix is a testament to his athleticism and the Broncos wicked defense.

It doesn’t matter who plays quarterback – Morton, Griese, Orton, Tebow – when the other team’s offense scatters and flees like someone pulled a fire alarm. Quarterbacks Jay Cutler and Brian Hoyer escaped healthy for the Bears, a ribbon-worthy accomplishment. The Broncos finished with seven sacks.

It was a welcome development for a defense that turned in two disappointing practices in camp, seemingly bored with mauling its own teammates. Thursday drove home a point that should not be overlooked. The Broncos’ defense boasts depth, talent and heavy doses of nastiness.

There was some grousing in Chicago that the Broncos were blitzing too much, not playing by the preseason code. But the Bears ran almost exclusively three-wide sets, leaving overmatched linemen and running backs vulnerable to pressure. Even without outside linebacker DeMarcus Ware (back) and cornerbacks Aqib Talib (leg) and Chris Harris (hamstring), the Broncos mauled the Bears. Denver held Chicago to 13 first-quarter yards. Moving past midfield became a feat for Chicago as the Broncos finished with seven sacks, a safety by linebacker Dekoda Watson and a blocked punt and score by linebacker Zaire Anderson.

“I didn’t realize how fast the defense was until I got out there,” said rookie Adam Gotsis, playing in a game for the first time since tearing his ACL in college. “They (edge rushers) were getting to the quarterback before I could even put my hands up to bat the ball down.”

Preseason games can become calisthenics for veterans. For the rookies, as Gotsis said, “they are everything.”

Vontarrius Dora took advantage of his opportunity. The 265-pound outside linebacker spent last week getting instructions on high volume. It wasn’t pretty. Dora took the advice as he transitions from a hand-in-the-ground player.

“Coaching was the key,” Dora said. “This scheme is so much fun. You can go out there and make plays.”

Offensively, there were too many penalties upfront, but glimpses of improvement. The Broncos started, from left to right, Michael Schofield, Max Garcia, Matt Paradis, Darrion Weems and Donald Stephenson. Weems took snaps at right guard and right tackle. Schofield could get a shot at right guard this week as starting Russell Okung continues to progress. Running backs Kapri Bibbs and Ronnie Hillman showed flashes. It’s fair to wonder if Hillman enjoys a strong camp if Denver would look to move him and promote Devontae Booker to second team.

It spoke to the Broncos’ dominance that they scored in all three phases. Brandon McManus added two field goals, but missed both attempts with rookie punter Riley Dixon holding (one at the end of the first half was blocked). That won’t help Dixon make the team as he tries to unseat veteran Britton Colquitt.

Kubiak preaches the importance of rolling up the sleeves and going to work. The Broncos punched the time card -- and the Bears in the face on Thursday. The Broncos don’t yet have a starting quarterback, but they have depth and defense to explain why they can wait this situation out.