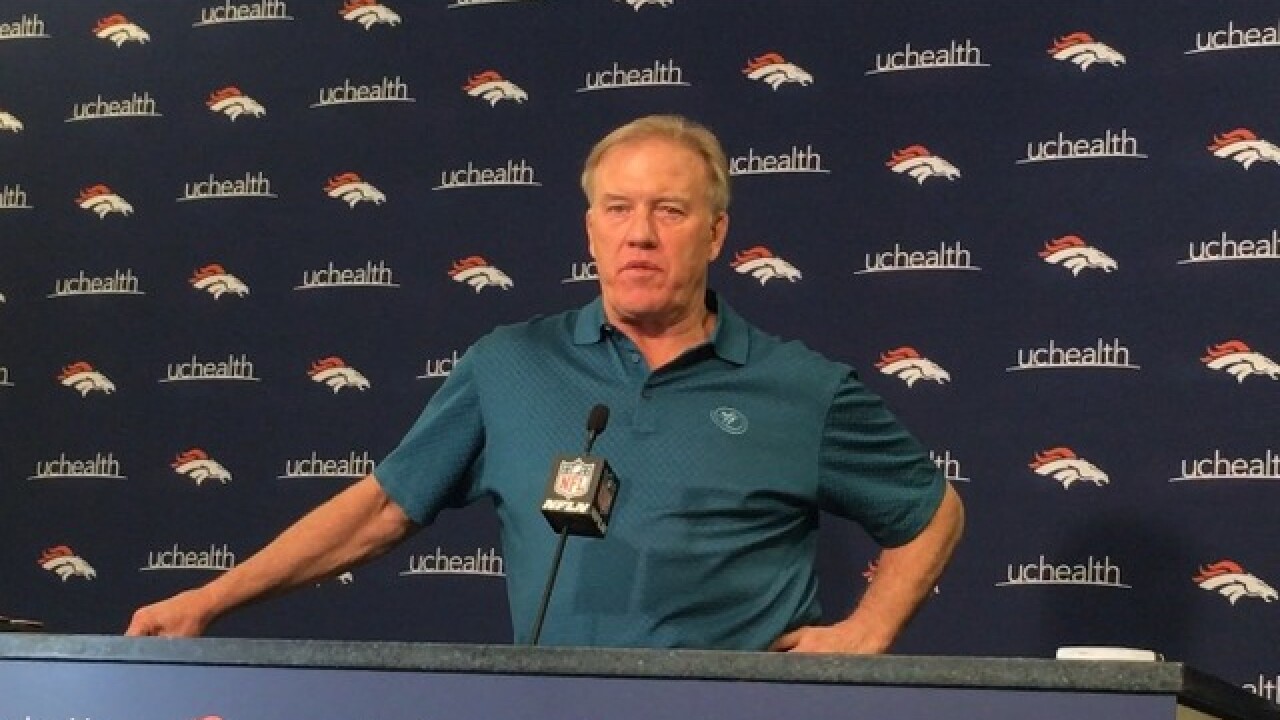 Copyright 2017 Scripps Media, Inc. All rights reserved. This material may not be published, broadcast, rewritten, or redistributed.
<p>Denver Broncos GM John Elway played for the team from 1983 to 1998.</p>

DENVER -- With Twitter set to explode at his response, John Elway patiently answered the question about the team's interest in Dallas Cowboys quarterback Tony Romo. Elway never lost his poise. He is open to everything, but not panicking over anything. Elway exercised disciplined last year, waiting out San Francisco regarding Colin Kaepernick before deciding to move on.

"Yeah [it's similar], because we feel good where we are. There are so many things...Everything gets ratcheted. I will just tell you this: There's been a lot of things out there that are not true as far as what's going with our quarterbacks. So that's what happens. Everything gets frothed up," Elway said when I asked him about last season's run at Kaepernick. "We just continue to go down our plan and that is to stay open and if something comes available we look at it at that time."

Speaking publicly for the first time since the NFL Combine, Elway remained bullish on Trevor Siemian and Paxton Lynch. Coach Vance Joseph echoed those sentiments, saying he was "comfortable" if Siemian started and that Lynch was ready "for the challenge of an open competition."

Elway and Joseph talked in concert, showing no inclination to trade for Romo. Those covering the Cowboys have hinted at a resolution this week, suggesting owner Jerry Jones recognizes that trading Romo, especially without a restructured contract, is unlikely.

Romo, too, is said to be growing more anxious. He thought he was going to become a free agent last Thursday. He would like to begin exploring his future options. Houston and Denver continue to be the teams expected to pursue Romo. Houston could draft a young quarterback, and sign Romo. If the Broncos engage in serious talks with Romo, negotiating his salary down to a manageable number -- in the $10 million range with incentives for games played, etc. -- is paramount. The Broncos would want protection against injury for a soon-to-be 37-year-old who has started four games over the last two seasons because of collarbone and back injuries.

"Tony is under contract. The last time I checked he’s still under contract. Like I said, nothing has changed since the combine," Elway said. "We are excited about the two guys we have here. We feel like we are in a good space there."

Elway indicated that the team continues to look at options at left tackle. There's no guarantee the starter is on the roster. Menelik Watson and Donald Stephenson are potential candidates as it stands now. But there figure to be more players added through the draft or free agency. ... The Broncos remain interested in re-signing linebacker Dekoda Watson and defensive end Vance Walker, who is moving well in his recovery from major knee surgery. ... DeMarcus Ware is testing the market. The Broncos have left it open-ended with him. Speculation remains that he could end up in Dallas to finish his career.