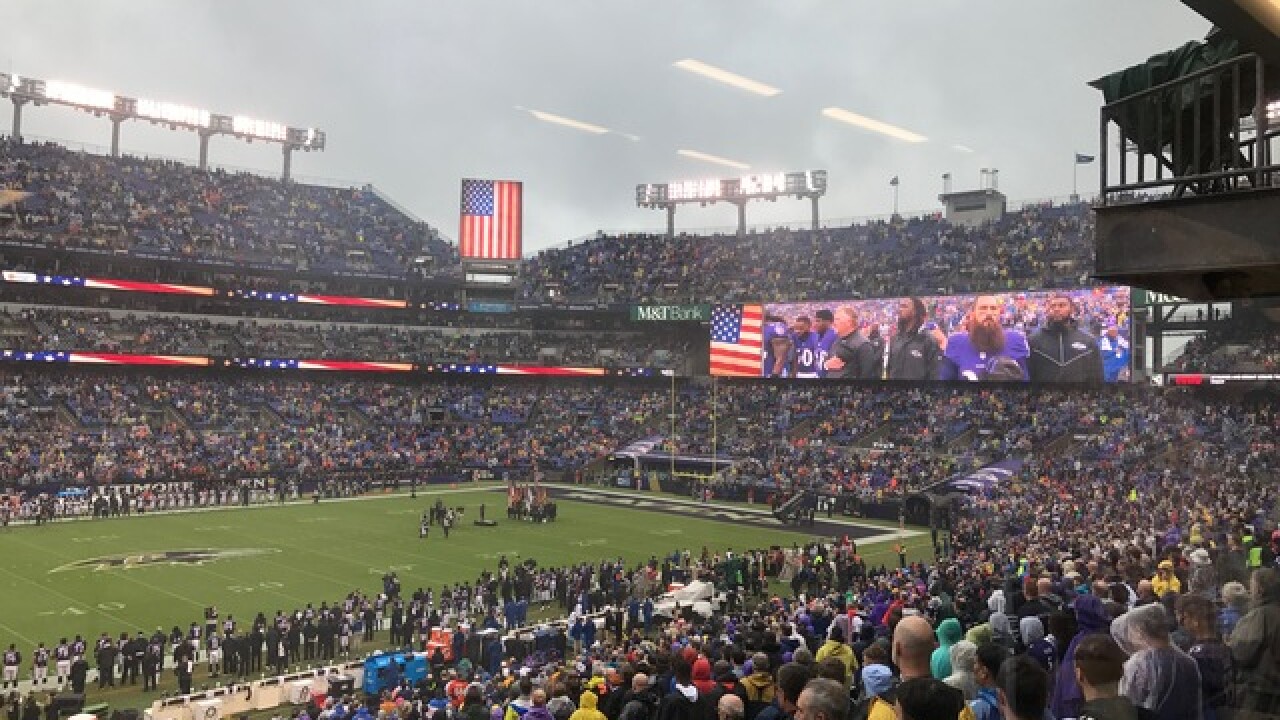 BALTIMORE, MD -- It was the rare Sunday when everything that went right amounted to a painful tease. Instead of a eye-opening result, the Broncos punctured their hopes with a gaggle of penalties, an underwhelming passing attack until the fourth quarter, frayed defenders and an ejection that left them strapped with a 27-14 loss to the Baltimore Ravens at soggy M&T Bank Stadium.

They finished with one fewer penalty (13) than points.

"A lot of them were really guys losing their composure," coach Vance Joseph said. "Playing against a really tough Baltimore team on the road, it cost us 20 points."

There was nothing wrong with the beginning and zero right when it was over. First to the mess. The Broncos grew undisciplined and, in the officials' view, unhinged after falling behind 17-14 midway through the second quarter.

Like the day itself, the unraveling started with a juxtaposition. Continued special teams excellence kept the Broncos within striking distance. Broncos safety Justin Simmons jumped between the guard and center, batting down Justin Tucker's 43-yard attempt.

"We had it in our backpocket," Simmons said. "It was something we worked on."

It snapped Tucker's streak of 23 straight, and set into motion a dizzying chain of events. Cornerback Chris Harris Jr. returned the block for a 58-yard touchdown. However, it was negated by nose tackle Domata Peko's illegal block as Bradley Bozeman flopped from a one-armed push 20 yards behind the play. The penalty was listed against reserve offensive tackle Billy Turner, but he wasn't in the game on the play.

"It was crazy, that called changed the game," Peko said. "We had some big plays taken away. But we have to play penalty-free. Yeah man, it was crazy. They said it was on 77, but we didn't have a 77 (on the field). Then we asked again and they said 37 (they don't have one). They couldn't clarify it."

Harris struggled to wrap his head around the call. He tried to remain diplomatic.

"I couldn't believe it. I thought it was a touchdown. Ya'll seen it," Harris said. "I can't speak too much on the refs. I don't want to get fined."

Rookie star Phillip Lindsay was thrown out of the game for entering a pile and throwing a punch . It symbolized a day when the Broncos showed fight, but missed their mark. Denver owned 10 penalties for 100 yards with eight minutes remaining in the game. Officials flagged every lineman, save for center Matt Paradis.

Broncos left tackle Garett Bolles held Terrell Suggs, negating a 39-yard play by Demaryius Thomas. And left guard Ron Leary was tagged for unnecessary roughness on third down in the fourth quarter, pushing the Broncos out of range when they were gasping for points. Instead of a field goal attempt to shave the deficit to 10, the Broncos punted for the seventh straight possession.

"You can't go in that long of stretch like that in this league," said quarterback Case Keenum, who was 22-for-34 for 192 yards with one interception, no touchdowns, while getting sacked three times. "It just wasn't our day."

Keenum looked hurried and frazzled. He had 56 yards passing midway through the third quarter. He wasn't sharp, but the line did him no favors as he sidestepped relentless pressure. This became an issue given the Ravens' efficiency.

One drive haunted the Broncos more than the rest. Leading 20-14 at half, the Ravens plodded and plowed 82 yards on 14 plays. Not only did they inflate their cushion to 27-14, but it represented their 12th consecutive touchdown in the red zone to open the season.

"We have to do a better job of disguising our coverages," Harris said.

How did it get here, with Denver's eighth road loss in their last nine games?

As fast starts go, Usain Bolt blushed at the Broncos. They might have equaled last year's road highlights in the first 90 seconds. Outside linebacker Bradley Chubb posted his first solo sack, lighting up Joe Flacco like the Vegas strip. Linebacker Joe Jones raced free and blocked the punt, setting up the offense at the 6-yard line. On the first play, Royce Freeman darted in for the score, shoving the Broncos ahead 7-0 with 13:29 remaining in the first.

It proved short lived. The Ravens cruised in for an easy score. The drive featured 35 yards by tight ends. Rookie Mark Andrews produced a 30-yard haul, and Alex Collins tip-toed in for a 6-yard touchdown as Josey Jewell, playing in base defense for Brandon Marshall, became engulfed in traffic. Marshall said after the game that he was on a play count because of his knee.

"It's hard not to be out there more," he said. "But I knew that it was going to be that way going into the game."

The first quarter boasted a bizarro world vibe. The Broncos looked nothing like the team that lost by an average of 13 points per game on the road last season. Keenum connected on third down conversions to Courtland Sutton and Devontae Booker, setting up trickery. Emmanuel Sanders zoomed into the end zone from 35 yards out on a reverse. If the play looked familiar, it's because it was. Sanders scored on the identical call at Washington, down to a key downfield block by fullback Andy Janovich. Denver held a 14-7 advantage, but on this slippery Sunday, they couldn't keep it from sliding through their fingers.

"It starts with me. I have to be better," receiver Emmanuel Sanders said. "We need to stay positive and not point fingers, and keep working to improve."

The Ravens responded with an eight-play drive, capped by Justin Tucker's seventh straight field goal of 50-plus yards. He celebrated with a bow at midfield. Obnoxious? Perhaps. But he is the NFL's best kicker.

And Baltimore isn't exactly providing moments for him to excel. The Ravens continued their scalding hot work inside the 20. When fullback Javorious Allen's reach to the pylon was overturned, Baltimore ran its season-opening streak to 11 straight scores in the red zone. The Ravens led 17-14 with 8:25 remaining in the half.

Following the blocked field goal, the Broncos took over. And took an off-ramp to nowhere.

Ravens linebacker Terrell Suggs slammed into Broncos Keenum for a sack, jarring the ball loose. As players dived into the pile, Lindsay raced in to help. On the ground, he tangled with a Ravens defender and either jabbed to keep the player's hands off him or punched. He was lying on his back. The refs saw a punch -- a questionable call -- leading to Lindsay's removal. He finished with 20 yards on four carries.

Lindsay walked off slowly, a mixture of pride and disappointment. He was by himself. He might as well have been a picture of the team.

"To be smarter," Lindsay said. "That is the lesson."

Cornerback Adam Jones worked for 20 minutes in the pregame, testing his injured quad and hamstring with trainer Loren Landow. With an eye toward the macro view, the Broncos kept Jones inactive, leaving Phillip Lindsay and DaeSean Hamilton to handle punt return duties. Rookie Isaac Yiadom was active, and drew a 15-yard penalty on kick return duty. ... Tramaine Brock watched from the sideline with a towel over his head in the first quarter, ruled out with a groin injury. Yiadom worked as the No. 3 corner.  ... Rookie Josey Jewell started at linebacker in place of Brandon Marshall. Marshall was active, but apparently lost his place to Jewell in base defense. ... Joe Jones' blocked punt was the Broncos first since Shaquil Barrett pulled off in a home loss last season to Cincinnati. ... The Ravens' Za'Darius Smith sacked Keenum in the first quarter and celebrated with the Ray Lewis dance. ... Safety Will Parks was evaluated for a concussion, but was fine after the game.