Broncos Fangio aims for third season to be 'magical year'

CEO Joe Ellis says 'Enough is enough. We have to win' 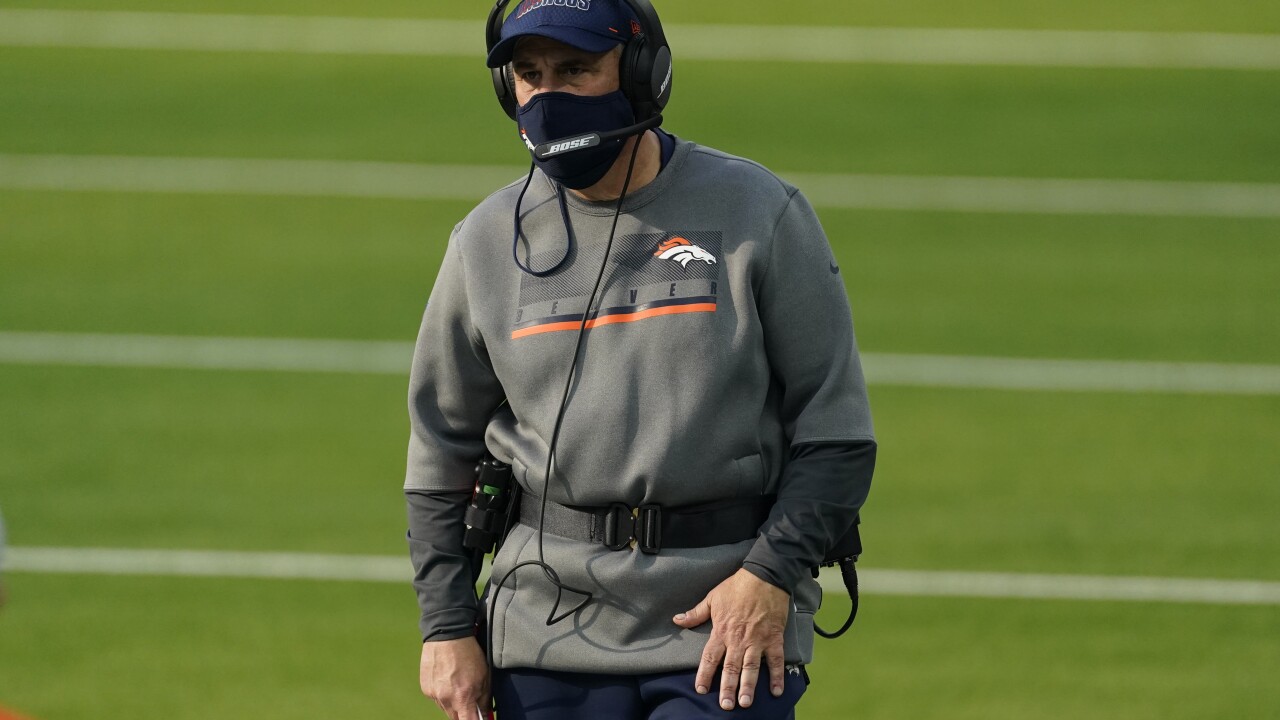 Ashley Landis/AP
Denver Broncos head coach Vic Fangio looks on from the sideline during the first half of an NFL football game against the Los Angeles Chargers Sunday, Dec. 27, 2020, in Inglewood, Calif. (AP Photo/Ashley Landis)

DENVER — If only the blink of the eyes or a wave of a wand could erase the Broncos' recent history. They own zero playoff berths over the past five seasons. And in coach Vic Fangio's first two years Denver has not been above .500 once in 32 games.

Even as he waits and offers input on the next general manager, he recognizes he must improve, saying the Broncos will address all matters from "A-to-Z."

"Hopefully, the third year will be the magical year for me where everything goes a little smooth again," Fangio said.

Fangio felt more comfortable in his first season because of normalcy. Playing football without a bubble in a pandemic this season created challenges, from 5 a.m. phone calls regarding COVID-19 test results, injuries and constantly changing schedules "that made it more distracting with more balls to juggle."

Entering his third season, it remains uncertain how much a new general manager will impact Fangio's status, though the aim is to find someone who can help him. John Elway, elevated to a consultant role on big decisions as president of football operations, will hire his replacement with input from Fangio and CEO Joe Ellis.

Fangio admitted that a fresh set of eyes can help the Broncos move forward even as Fangio said he expects his entire coaching staff to return, including much-maligned special teams boss Tom McMahon. I asked Fangio if he felt more or less secure his position now that Elway, whose fast friendship and connection with the longtime assistant led Fangio to Denver, is no longer running the daily operations.

"Whoever we end up hiring here I am sure we will forge a good relationship. I have had experience over the years obviously working with many different general managers. I like to think I am easy to work with," Fangio said. "I am sure who we hire is a consensus builder, but will ultimately be the guy that makes the final decision as it relates to the roster. I am not really concerned about that."

Fangio echoed Elway's message from Monday that improvement starts with taking care of the ball and taking it away. The Broncos ranked last in turnover margin at minus-16. The Broncos led the NFL in turnovers (32) and interceptions (23) and finished fourth from the bottom in takeaways with 16.

They need upgrades on both sides of the ball. Fangio did not discuss positions, but it's obvious that the Broncos require help at cornerback, linebacker and possibly right tackle, depending on Ja'Wuan James' ability to find traction after playing only 63 snaps over the past two seasons due to a knee injury and his decision to opt out this year.

"He is anxious to get back into the fold and earn the trust and respect of everyone moving forward," Fangio said of James. "and I think he will be able to do that."

No matter what is said, the move of Elway upstairs creates more challenges for Drew Lock. No one was a bigger advocate for the young quarterback. And while Elway will certainly offer his opinion, the arrival of a new GM increases the likelihood that Lock faces competition for the starting job.

Lock finished with 11 touchdowns and five interceptions over his final seven games, but finished last in the NFL with a 57.3 percent completion percentage.

"Going through the same offense, being able to study the cut-ups this offseason and actually seeing himself in our offense, he will be able to improve from that. You can make improvements in the offseason just through the classroom, especially because he's going to be watching himself on tape," Fangio explained. "I think he can come back better."

Fangio insisted the new GM would make final decisions. Ellis, too, said this would be the case. The only way a new boss can help produce change is with independence and authority. The Broncos have requested and received permission to interview former Broncos front office staffer Champ Kelly, who is the Bears assistant director of player personnel. The plan is to interview multiple African-American candidates, Ellis said.

The new GM will be in charge, Ellis insisted as questions were raised about this person working in Elway's shadow.

"John will not meddle and get in the way," said Ellis, who is not sure if Elway will be in this same consultant position when his contract expires after next season, but that he will always "be a part of the Broncos" franchise. "The conversations with (Elway) were candid and quite open. John arrived at the conclusion that this needed to happen. It's commendable and in the best interest of the organization. He made it. It wasn't difficult to get where we got through over the last (three weeks)."

Ellis recognizes the disappointment of the fans. The Broncos have posted four straight losing seasons for the first time since 1963-72. They finished six games out of a playoff spot this season.

"There is a lot of frustration. And it boils over into anger. I witnessed it in the locker room. And it carries over into the community. I know what's going on. All of that is justified," Elllis said. "And we have to do something to stop that. We have to win."

Ellis was more biting in his commentary in his year-end wrap, saying there is pressure on team to improve, and they need to deal with it. What gives Ellis, I asked, confidence Fangio will get better while working with a new GM.

"Vic is going to be part of the process and will sign off on whoever is brought in as the GM to be able to help him. I am not too worried about that. Whoever we bring in will have good football acumen and experience and will be sure to be able work with Vic on shaping the roster the way he needs it," Ellis said.

"In terms of (Fangio's) lack of success and some of the issues on the field (like clock management) I do believe he has great ability to teach players how to win and put them in a position through game-planning where they can be successful. We just haven't executed it. We have had problems late in games. And it boils up in frustration and anger and I understand that. So does Vic. We have to improve there. We have to win. We have to get better. I do think he's a good football coach. I think the staff is good. They are experienced. I think one more year with them together stabilizes things to a certain point -- fans will disagree and say it's just not going to work -- but I don't see it that way. I think it has a chance to work."

--He said he belives the trust will be validated during the trial that begins on July 12, which could help provide a pathway to clarity on the ownership issue. Beth Bowlen Wallace and her sister, Amie Klemmer, filed a suit against the three-person trust of Ellis, team counsel Rich Slivka and Denver attorney Mary Kelly regarding the mental capacity of Pat Bowlen when amendments were made over the years. "That trial has to take place or those claims have to go away before the team would be sold. We haven't made that decision. We are basically focused on getting through this trial, and validating the trust to keep it in the family and name a child or sell the team. We are not putting the cart before the horse. We are ready to go to court and get it resolved and we are confident we will prevail," Ellis said. Bowlen Wallace suggested on Dec. 2 that the best path for the team would be to sell the team because the siblings will not agree on a controlling owner.

The trust, if not Ellis specifically, is approved by the NFL to run the team through March 2022.

--Ellis praised Brittany Bowlen, the trust's handpicked successor if the team remains in the family, for her work on projects and spearheading the Broncos' COVID-19 response. She will be given an office at UCHealth Training Center.

--Ellis remains hopeful that there will be events at Empower Field at Mile High and full capacity by August, but said it would not make sense to predict it would happen. The Broncos are in good shape financially after taking a huge revenue hit with limited or no fans for most of the season. However, a repeat of this experience would obviously not be welcomed or easy to absorb. "That would be a big challenge for us, though I think we could get through it," Ellis said.

--The Broncos have no plans to lay off employees, reduce pay or ask for furloughs.

--Those who will be present for the GM interviews: Ellis, Elway, Fangio and Patrick Smyth, who will be "an active note taker."

Footnotes
Two Broncos players will have minor surgery in the next few weeks: guard Austin Schlottmann (shoulder) and cornerback Michael Ojemudia (knee). .. Fangio is not sure if and when the players will gather this offseason. That is up in the air until dates and protocols are approved by the league.