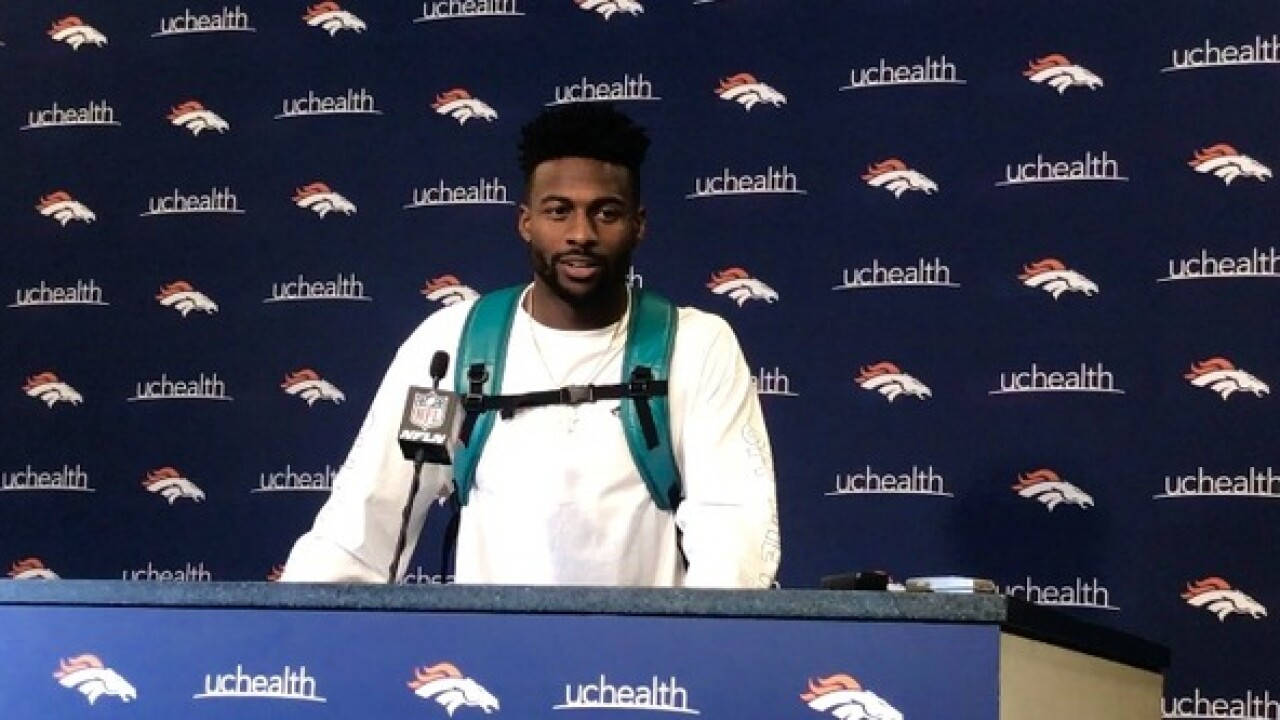 CENTENNIAL, Colo. -- Emmanuel Sanders admitted Wednesday what became obvious over the final four months of last season. The quarterback carousel submarined the Broncos, leading to 22 interceptions and a pathetic 18 points per game.

"I remember when I got out here, I went out to the team store and I saw Case Keenum jerseys. I was like, ‘Thank God, I don’t have to deal with that again.’ Case is our guy," Sanders said after the Broncos held another workout during Phase 2 of the offseason. "He's a leader. He's that leader."

No need to pretend the six quarterback switches -- Trevor Siemian to Brock Osweiler to Paxton Lynch and back again -- worked or made sense. The Broncos stunk, and the offense deserved a healthy dose of blame. In Keenum, the Broncos brought stability to the position, Sanders explained. For two straight years, Sanders talked in May about a competition, about uncertainty. It impacted performance not knowing who was in charge.

With Keenum, clarity is no longer a stranger. He's the guy.

"Every single pass that he’s thrown so far—I wouldn’t say ever single—but a majority of the passes, 95 percent or 98 percent, have been there. He’s confident in himself," Sanders said. "You don’t have to second guess what his thought process is."

The offensive overhaul under coordinator Bill Musgrave will feature uptempo and no-huddle concepts, and conform around Keenum's strengths. He showed he could manage a game last season in Minnesota, and has better mobility than many realize. Sanders conceded the offense already has a different vibe in the early workout sessions.

The reboot almost came without Sanders. For roughly two months after the season, speculation swirled that the Broncos might move on from Sanders or veteran Demaryius Thomas.

"I thought I was going to be gone," Sanders said.

In the end, Broncos general manager John Elway kept both, while challenging them to play better.

Sanders suffered through his worst season in Denver, compromised by an ankle injury when hit by Giants safety Landon Collins in the fifth game. He caught 47 passes for 555 and two touchdowns. He averaged 1,190 yards and six touchdowns in his first three seasons in Denver.

Sanders is not fully recovered from his ankle injury, calling it a "process" with options to explore if needed with training camp four months away. For now, he remains optimistic after doubt surfaced.

"The ankle is doing good. We're just testing it out every single day. I was running around today, caught a slant, and took it 60 yards," Sanders said. "(Last season) was bad, it was bad. I was questioning, 'Do I even want to play?' This year I have a different mentality. Get my confidence back. Get my ankle back up and ball out."

At 31, Sanders hears chatter typical of aging NFL players. Did the drafting of fellow SMU star Courtland Sutton and Penn State receiver DaeSean Hamilton accelerate his exit after this season when the cap hit is manageable $2.6 million?

"It's a business. I understand that. I will help them in any way I can," Sanders said. "I want to see them do well."

Sanders believes he remains in his prime, citing the league changes that forbid two-a-day practices, while limiting contact in the name of safety.