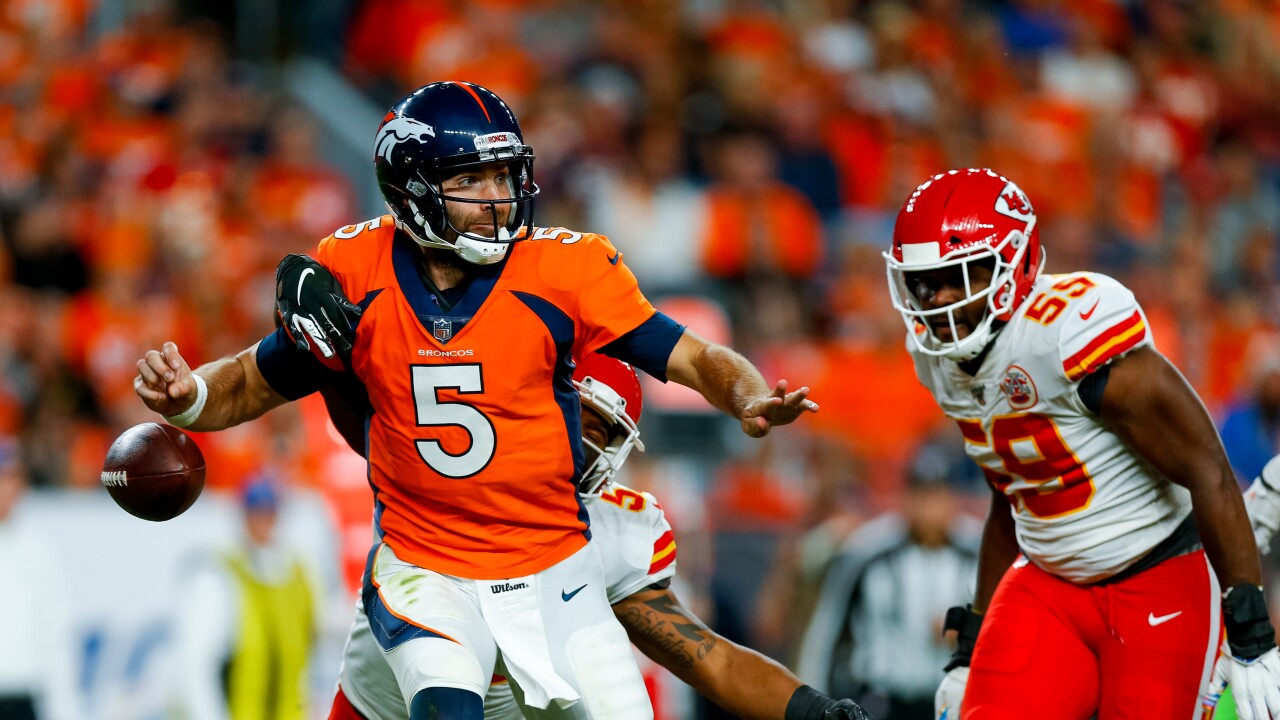 Justin Edmonds/Getty Images
DENVER, CO - OCTOBER 17: Linebacker Anthony Hitchens #53 of the Kansas City Chiefs strips the ball away from quarterback Joe Flacco #5 of the Denver Broncos as linebacker Reggie Ragland #59 runs to recover the ball during the second quarter at Empower Field at Mile High on October 17, 2019 in Denver, Colorado. (Photo by Justin Edmonds/Getty Images)

DENVER — This is what hope feels like. Two hours before kickoff, electricity pulsed through the crowd. Enthusiasm was palpable. Orange-outfitted fans coated the parking lot and sunset. The Broncos fell into a well in September and spent the last two weeks slowly crawling up rungs to the light. They entered Thursday confident.

The sense of ugliness was hard to articulate. With the LED spotlights in full glow, the Broncos fell out of sight like a skipped rock sinking to the bottom of a bacteria-infested pond. They were not competitive, a soundtrack of boos accompany this embarrassment.

This is what hope looks like when it exits on a Wanna Getaway Southwest flight.

"We got our asses kicked," said defensive end Shelby Harris.

There was nothing redeemable about this performance, the Broncos' eighth-straight loss to the Chiefs.

SOUND OFF: Whether it's a gripe about a play or a bad call, we want to hear from you on Denver7 Broncos hotline.

Even with reigning MVP Patrick Mahomes sidelined with a dislocated knee from the middle of the second quarter, the Broncos staged a system-wide meltdown. Their forgettable performance summed up thusly in the first 30 minutes: The Chiefs netted six sacks, Denver posted 23 yards rushing, tight end Noah Fant failed to catch two long passes, referees flagged Garett Bolles for holding twice, Colby Wadman looked ridiculous on a fake punt, Brandon McManus missed a 45-yard field goal and clock management before the half was bewildering. Does that cover it?

"Every game that you lose is a missed opportunity," said running back Phillip Lindsay, who finished with 36 yards on 11 carries. "We let this one get away and it starts with the offense. Our defense is doing their job."

The Broncos figured they had a chance only because Mahomes was ruled out. But it would be hard to play worse than they did after the game's opening drive. At one point broadcaster Troy Aikman wondered aloud if this was the worst offense he had ever seen. Denver finished 2-for-16 on third and fourth downs. The Broncos have punted 15 times over the past two games. and finished with 71 yards Thursday, 90 fewer that the Kansas City had allowed per game.

It all started so well. With the Chiefs stacking the line of scrimmage to help their porous rush defense, the Broncos followed a blueprint with nuance. They rushed to establish the pass, with completions to Emmanuel Sanders and Andy Janovich (22 yards). It set up a 1-yard Royce Freeman plunge, his first score of the season. It ate 5:54 off the clock.

The Broncos jumped into an episode of "Quantum Leap" with Scott Bakula, somehow believing it was the fourth quarter. They panicked. Coach Vic Fangio, after a Chiefs penalty, chased points after the touchdown. A Lindsay run failed with Janovich inexplicably absent on the play. The slope became slippery. Fangio admitted afterward that it was an analytics-driven decision and said, "I think the two-point conversion needs to be ignored until the fourth quarter."

You think you hate a fake punt? Wait until you see it live. Wadman attempted one and was devoured as he ran to his left with his receiver unable to cut free. The freefall had begun.

"It was botched," Fangio said of the play that didn't appear to have anyone in a route to provide a safety valve for Wadman.

The call reeked of desperation, following in line with the two-point miss. The Chiefs pounced with a 36-yard punt return that set up a field goal, widening their lead to 10-6. Moments later on a fourth-and-1 keeper with a little over eight minutes remaining in the second, Mahomes stayed down. Chiefs players reacted in disgust, believing it was a worst-case scenario. Mahomes, who yelled on the field that his "knee was out," according to Broncos players -- walked into the locker room, and was diagnosed with a dislocation.

Vagabond Matt Moore replaced him as Kansas City setted for a field goal. With a bump knowing Mahomes was sidelined, the Broncos regifted all momentum when Anthony Hinchens sacked Flacco, jarring the ball loose, and Reggie Ragland scooped it up and scored. The Chiefs outscored the Broncos 20-0 over the next two quarters without Mahomes, an indictment of Denver's worst prime time performance since the loss to the winless New York Giants in 2017.

"The best teams I’ve played on have gotten blown out," said Flacco, who looked uncomfortable and ineffective from the second quarter on, going 21-for-34 for 213 yards, while getting sacked a career-high eight times. "You will be humbled."

Flacco spoke of how a team reacts can define a season. He was measured in his comments as always. But Broncos fans, furious and angry, are seeking fire and passion from veteran leaders with the season swirling down the drain.

The disappointment ran deep, infecting all levels of the offense. The Broncos could not establish the run, and looked like they had never seen a blitz. As the fourth quarter opened, the Chiefs had eight of their ultimate nine sacks and left tackle Bolles had three holding calls, giving him nine for the season. Flacco looked indecisive, not helping the mess by holding onto the ball. When he did find an open man deep it was Fant, who dropped three passes, and was booed after the last clunker.

He was not along in forgettable performances. Von Miller failed to register a tackle or a sack.

"We want to win. We have a high standard here in Broncos country," Miller said. "Not being to do it is frustrating."

At 3-4, the Broncos' goals remained in sight. At 2-5, they require a telescope. Losing is one thing. The Broncos were not competitive with a Chiefs team compromised by injury. It raises fair questions: Will rookie quarterback Drew Lock begin practice next week and be in the mix in late November or early December? Does this change the posture at the trading deadline? Broncos general manager John Elway said last week the Broncos are trying to win games, not move players. But it's not hard to see the Patriots pursuing Emmanuel Sanders or the Eagles courting Chris Harris Jr.

The Broncos wanted to avoid this talk. But they earned it with a performance so putrid that it will leave a stain hard to erase over the next two months.

"It was a big opportunity but is it done? No, it's not done. Obviously, we can get on a roll, but it doesn't look like it after this loss. That is what everybody is going to be thinking," Sanders said. "But at the end of the day, we have to be positive. You've got to find a silver lining somewhere."

Right tackle Ja'wuan James has not played since logging 10 snaps in the opener. He sprained his MCL, and the dirt infield actually helped because without slipping while hurt he might have been done fort the season. Five weeks later, he aims to start against the Colts next Sunday. James said he expects to be ready to go after a full week of practice. He became the highest-paid lineman in Broncos history this offseason, signing a four-year, $51-million deal with $32 million guaranteed. Will the Broncos shakeup the line if returns? It's worth monitoring after a dreadful performance.

Broncos Will Parks broke his left thumb in the first quarter and did not return. He said he hopes to be back in roughly three weeks. ... The Broncos' inactives included only one mild surprise: linebacker Corey Nelson. He lost his spot with Alexander Johnson starting and Josey Jewell returning in a reserve role. Defensive end Adam Gotsis and tight end Troy Fumagali were also healthy scratches.