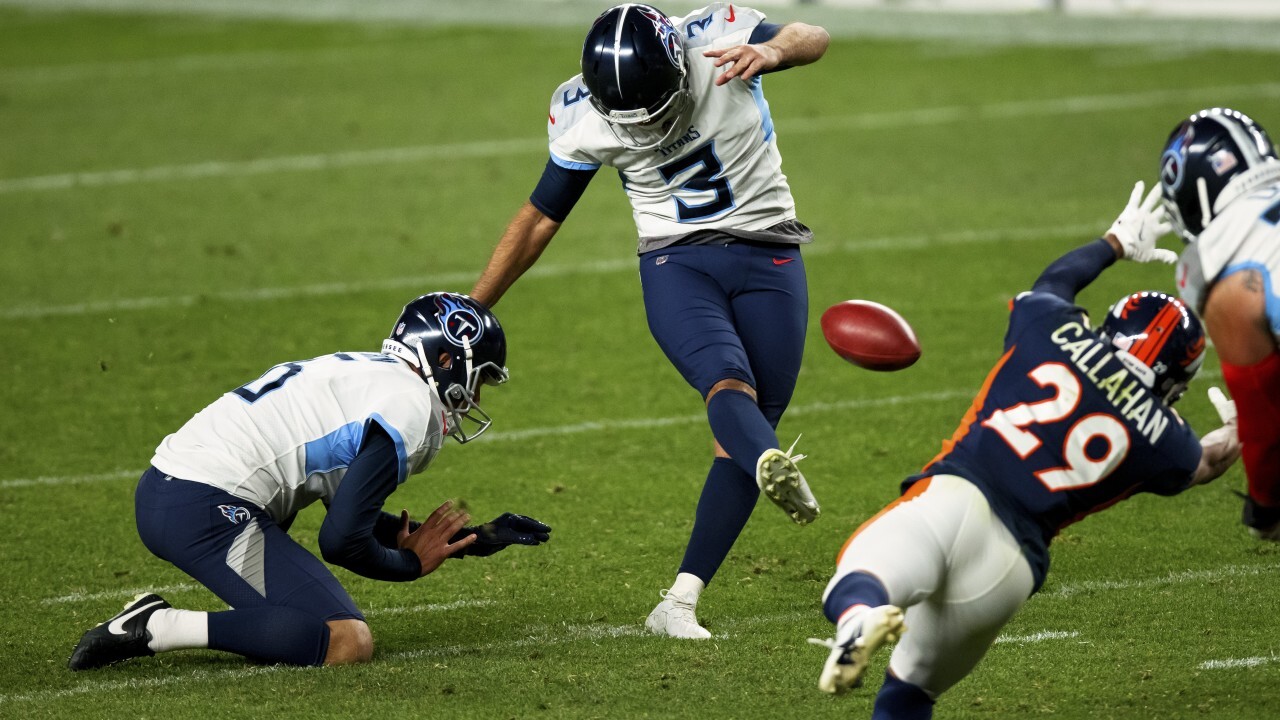 DENVER — One drop. One brain lock. And another heart-in-a-blender loss.

The Broncos' season-opening 16-14 defeat at Empower Field at Mile High sounds simple, but remains nuanced by mistakes that were avoidable, if not baffling.

Let's start at the end because that's where everything unraveled for the Broncos. Holding a one-point lead with nervy knuckles, they took over at their own 44-yard line with 4:06 remaining. They needed 12 yards to put Brandon McManus in position to cap a great week -- he received a four-year contract extension on Friday -- with a final kick in the Tennessee Titans' chops.

Instead, the Broncos left with red faces and tough questions to answer.

On first down, electric rookie receiver Jerry Jeudy dropped his second pass of the night. He finished with 56 yards receiving, but the gaffe cost the Broncos at least 15 yards, a comfortable first down and a chance to Ziplock the game with McManus. A rookie making mistakes -- they often try to hit home runs in yards after catch -- is easy to explain.

What Fangio did on the Titans' last drive is difficult to reconcile.

Starting at the 1:54 mark left in the game with the Titans at the Broncos' 29-yard line, coach Fangio had opportunities to call timeouts. He chose to keep them. Derrick Henry rumbled for 13 yards, eclipsing the 100-yard mark. No timeout as 46 seconds ticked off. By the time Stephen Gostkowski applied soothing balm to his migraine evening -- three missed field goals, one botched extra point -- the Broncos had 17 seconds left to scramble into field goal position.

Fangio believed Gostkowski, who appeared cooked, would miss five kicks, even if history and probability mock such a statistic. Regardless, he nailed the 25-yarder, and the Broncos are left to wonder what could have happened had their won their eighth straight season opener at home.

Inconceivably, the Broncos exited the game with two timeouts remaining and one demoralizing loss.

"You don't always get that lucky to get a chance to redeem yourself," Gostkowski said.

Fleeting moments of resilience and performance dissolved with the disheartening ending before 500 family members and 1,000 cutouts.

Fangio explained his decision to keep the timeouts in his pocket which did nothing to calm an irritated Broncos Country.

"It was two-fold. We didn't want to extend their drive. Their kicker had his problems. And No. 2, we would have used the timeout but we got the running back out of bounds, and they threw the ball and stopped the clock," Fangio said.

Added defensive lineman Jurrell Casey, "Definitely easy, I thought (Gostkowski) could have missed it. But you can't expect him to miss them all."

Fangio's explanation doesn't address why he didn't stop the clock sooner. In the end, Drew Lock was unable to wave a magic wand with whiskers of time left. The game ended and started a series of what-ifs with the undefeated Steelers looming in Pittsburgh on Sunday.

"It was a lot of little things," said Lock, who finished 22 of 33 passing for 216 yards and one touchdown. "We want to be an elite offense and we were not elite tonight."

No Von Miller, no Courtland Sutton and no second half for A.J. Bouye and Phillip Lindsay. The Broncos have endured the type of injuries you wouldn't wish on your worst enemy. The Titans saw the Broncos' four injured players with missed four kicks by Gostkowski (three missed three field goals and an extra point).

The Broncos delivered a statement drive in the fourth quarter. These were moments that were strangers to the Broncos the past four seasons.

With Lock showing accuracy -- he was sharp most of the night and admitted, "It just feels right (in this offense)," he said -- and Melvin Gordon gaining traction, Denver went from clumsy to qualified. Gordon produced his biggest gain on the drive -- a 25-yarder -- and his first Broncos touchdown, helping shove the Denver ahead 14-13 with 9:08 remaining in the fourth.

Even without star players, even without a sellout crowd at full throat, the Broncos had a chance to deliver a punch to the throat and extend their season-opening win streak to eight games. Instead, the offense fizzled. Jeudy, who put defenders on skates twice with moves, dropped his second pass of the night after the Broncos took over with their four-minute offense poised to clinch it.

"He wanted to do well so bad, he kind of forced some things on himself," Lock said.

Added Gordon, "Mistakes are going to be made. I made one (with a turnover). It was his first game. He's pretty hard on himself with the drops, but he will be better for sure."

First games make lasting impressions. As do second drives. The Broncos balanced their attack as if in chemistry lab. Equal doses of Lindsay and Gordon (78 yards on 15 carries) on the ground and the cayenne pepper of Lock. Lock looked comfortable on bootlegs and rollouts. He extended the march with a 3-yard first down scamper. As the Broncos reached the red zone, an early defining moment emerged.

Field goals, as the last four seasons without a playoff berth have shown, lose games. Or in Gostkowski's case, jobs.

The Broncos showed more aggression, and remarkably better play from their quarterback than this time a year ago. On second-and-7 from the 9-yard line, Lock escaped pressure as he rolled right and made a throw that makes coaches chug Pepto-Bismol.

"If you are going to throw across your body, you better know what you are doing," ESPN analyst Brian Griese, who is bullish on Lock's potential, said on broadcast.

Lock possesses the DNA of a risk taker. But it was calculated. He drilled tight end Noah Fant for a 9-yard score as the Broncos led 7-0 with 26 seconds left in the first quarter. With Sutton sidelined with a sprained right shoulder, Fant emerged as Lock's favorite target, catching five passes for 81 yards in the first half.

"I think this is a bit of what can see this season," said Fant, who did not catch a pass in the second half. "Obviously, we don't want injuries. We want all of our guys on the field. You have to have the mentality that you can't get them back in that moment. We have to press forward. Even with those injuries, we put ourselves in position to win the game, and we need to close it out."

While Lock began to coalesce with a young offense -- he built on momentum from his final three training camp practices -- the Broncos missed an opportunity to grab the game by the nape of the neck. Little mistakes can create bigger issues as Gordon said. That resurfaced late in the half as Diontae Spencer fielded a punt inside his own 10. Gordon, who found traction in the second half, followed with a fumble on a swing pass and Dre'Mont Jones' offsides on third-and-6 led to a first down and eventual tying score by the Titans.

The Broncos kept Henry from squishing them early, holding him to an acceptable 50 yards in the first 30 minutes. Quarterback Ryan Tannehill turned to tight end MyCole Pruitt for a 1-yard dart for a score that nearly dented his facemask. It ended the Titans 5 1/2 quarter scoring drought in Denver after last year's shutout loss.

In game one a haunting thought surfaced after the Broncos had first-and-goal at the 2. It was the second quarter. Time to move, to create space, to turn hope into belief. Gordon, who entered the season with 48 touchdowns the past four seasons, couldn't use Google Maps to find end zone on this possession. Lock missed Nick Vannett on a wide-open touchdown moments later, overthrowing him in the corner of the end zone after feeling pressure. And on fourth down, they went to a gadget that goofed.

Looking at the analytics , a strong argument exists for going for it. The issue wasn't being bold, it was the call.

Lock rolled right and shoveled a pass to Jake Butt. He didn't stay tight on the line of scrimmage to sell that he was blocking -- that's how Travis Kelce pulls off this play -- and was an easy mark for the Titans defense. As the game advanced, it appeared that stuff would be the crowbar to the Broncos' shins. But Gostkowski kept pulling the Broncos back into the fray. You half expected him to limp off at some point to make sense of his personal debacle.

He never missed three field goals in any of his 204 games with the Patriots. Coach Bill Belichick never seems to cut bait too late, right?

What could have easily been a 23-7 deficit was only 13-7 after Tannehill found Jonnu Smith for a 1-yard score. Then the Broncos' offense rolled up its sleeves. They were in position to seal the win. Instead, their most important drive fizzled when Jeudy, and then Fangio dropped the ball.

"It shouldn't have come down to that," safety Justin Simmons said. "The slow cuts are really what did it. They just dink and dunk you. It's something we have to fix and finish the game."

Injuries smash Broncos, Bouye, Lindsay hurt
Injuries in the NFL are not a matter of if, but when. Or in the case of the Broncos, who. With Von Miller (ankle, out indefinitely) and Courtland Sutton (shoulder, should be back vs. the Steelers) out, more stars joined the trainer's room Monday. Cornerback A.J. Bouye hurt his right shoulder on a diving attempt to deflect a pass before halftime, his arm awkwardly stretched on impact. He did not return, and running back Phillip Lindsay did not return in the second half because of a turf toe, an injury he battled in college. Lindsay has missed only one game in his career. He had seven carries for 24 yards in the first half, and provided a key block in pass protection on the Broncos' first scoring drive. "He will be back sooner rather than later," Gordon said after talking with Lindsay.

Michael Ojemudia started at nickel back alongside Bouye and Bryce Callahan. He never blinked, showing physicality at the line, And undrafted free agent Evan Bassey entered in the dime package in the second quarter. Ojemudia had a third quarter interception negated when linebacker Alexander Johnson was called for personal foul for hitting a player who was out of the play.

"I was just playing until the end of the whistle and the ref saw something different," Johnson said. "It sucks."

Footnotes
The Broncos and Titans stood in unison for the playing of the black anthem “Lift Ev'ry Voice and Sing." They returned to the locker room and came out for the national anthem. Eighteen Broncos knelt during the song. ...

DreMont Jones continues to show why he was one of the best players in training camp. He delivered a thunderous hit on quarterback Ryan Tannehill to end the Titans' first drive of the second quarter. He also showed his youth with an offsides penalty on the Titans' first scoring drive. ... Broncos receiver Tyrie Cleveland entered the board in NFL with seven-yard catch in the first half.

Bradley Chubb did not register a tackle, but had two quarterback hits. ...