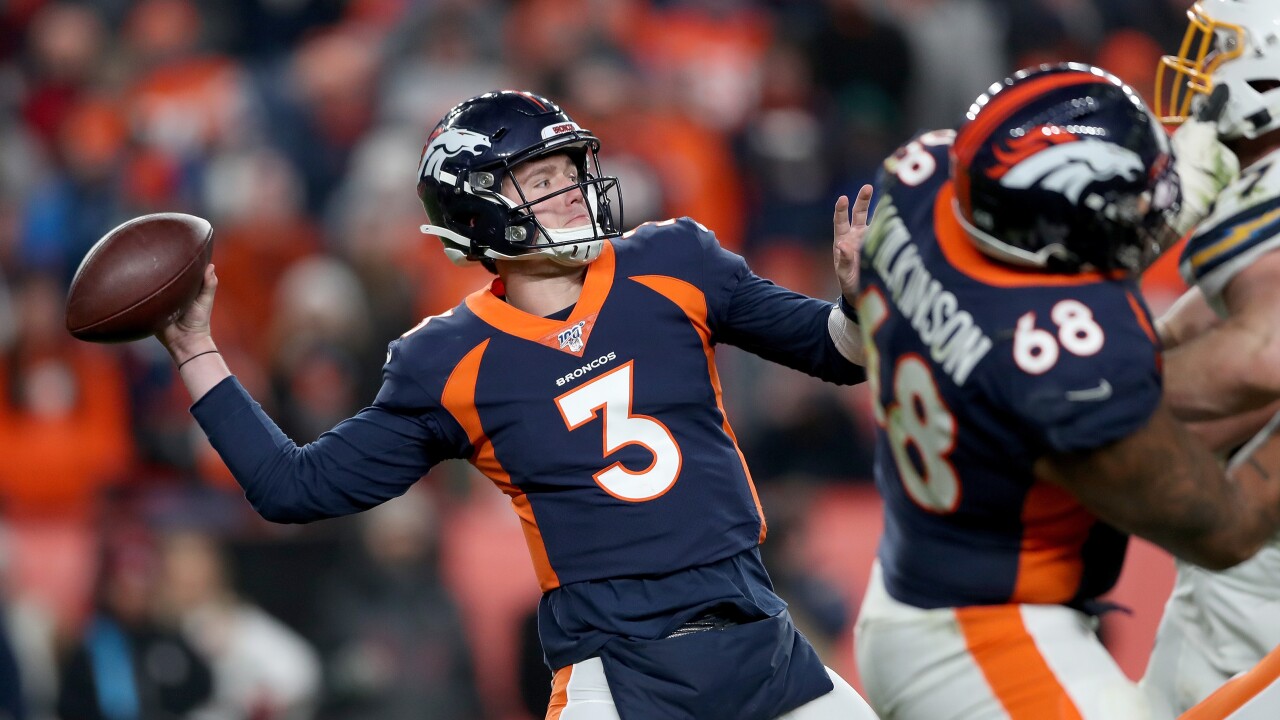 ENGLEWOOD — Drew Lock stood at the podium Wednesday, unafraid to let a grin crease his face. He enters his second week as the Broncos quarterback, the team's seventh since Peyton Manning retired. Lock knows how the Manning name hangs over the franchise's recent history. Heck, he knows the Mannings, having spent time at their passing academy. So when the rookie's phone buzzed with congratulatory texts last Sunday, one stuck out.

"Archie Manning said, 'You can't win 'em all if you don't win your first," Lock said.

Of the quarterbacks to follow Peyton Manning, who has talked with Lock on the sidelines before games, only two own winning records: Trevor Siemian (13-11) and Lock (1-0). The new challenge is hard, not as difficult as talking over the leaf blower in the player's parking lot during a press conference, but daunting nonetheless. The Texans are 8-4, play in a loud stadium and are coming off their best win of the season, handling the defending champion New England Patriots. Lock played at NRG Stadium in college. He has an idea of what to expect. That's what sticks out about him. He gets the responsibility of the whole QB1 thing.

"Where does my confidence come from? I don't think there's an exact thing I can point to. It's just kind of who I have been. Not just football and basketball, everything I have played," said Lock, who gleaned part of his edge from talking trash in youth basketball. "I have been through some tough times in sports. I feel like I can come out of any bad times I have had."

Lock cited his freshman year at Missouri for teaching him how to handle adversity. He won his first game against South Carolina then dropped four straight games, a stretch that featured no touchdowns and four interceptions. As such, he refuses to overreact to his debut. If anything, it makes him more motivated to be the "face of the offense." Players believe his swagger can help a team on its third quarterback and struggling to score points overall (16.5, 30th overall) and in the second half (79, 31st overall, four points more than the Miami Dolphins).

"When the quarterback is confident it helps you out," said running back Phillip Lindsay, who is on pace for 1,021 rushing yards in his second season. "It gives all of us confidence."

Lock has worked to fit into the fold. He takes ribbing from the guys -- they joked that his wristband with plays made him look like Buzz Lightyear calling Star Command -- and is comfortable in the spotlight. There's no question that to succeed in the NFL, a quarterback needs athletic arrogance, as coach Vic Fangio calls is, and it doesn't hurt when you have a chip on your shoulder the size of a Pringles can.

"I think he did a good job handling the situation—pre-snap, emotionally, didn’t feel like it got too big for him at any point in the game," Fangio said. "Just (need to see) some better throws in some situations, a little bit more accuracy. Just general improvement all the way across the board (this week).”

Added general manager John Elway during his weekly appearance on the team's website: "The key thing for a QB is you have to have a reason for why you do things. So to be able to say, ‘I saw this, I saw that, and that’s why I did this’ — to be able to see that from a first start is a real good sign."

There's no question that the Broncos simplified the gameplan for Lock, who was starting after only nine practices. He could get more spoonfuls this week. But he has learned an important lesson after one appearance. Ball security is job is job security.

“You can’t go broke if you’re taking a profit," said Lock on not forcing plays that are not there.

Footnotes
Linebacker Von Miller practiced in a limited basis on the sprained MCL in his left knee. He is on track to start after snapping his 95-consecutive games played streak. ... Ja'Wuan James (sprained MCL left knee) remains in line to start at right tackle for only the third time this season. ... Fangio was not giving in on his reason for nixing Brandon McManus' 65-yard field goal attempt last week. McManus yelled at McManus and ripped off his helmet in anger. And he disagreed with Fangio's premise that it would have impacted his mechanics going forward. Said Fangio on Wednesay, "At the time, I didn’t know it went on until after the game. He wanted to go out there and try it, and I didn’t think it was the right thing to do at that time. Part of the reason -- a big part of the reaso -- was because it’s been proven in the past with other kickers and possibly him too, that if you take a big swing at one of those early in the game, it could affect your swing later in the game. I’m saying that’s why he made the 52-and the 53-yarder because he didn’t alter his swing for a 65 yarder. And the air was a little heavier than normal. I talked to him afterwards. No big deal.” ... Receiver Courtland Sutton, who should make his first Pro Bowl, said learning better technique at the line of scrimmage to create space on routes has been critical in his second season. His improvement has been impressive. He leads the team with 906 yards receiving.