Broncos' Drew Lock leads team to win in his debut 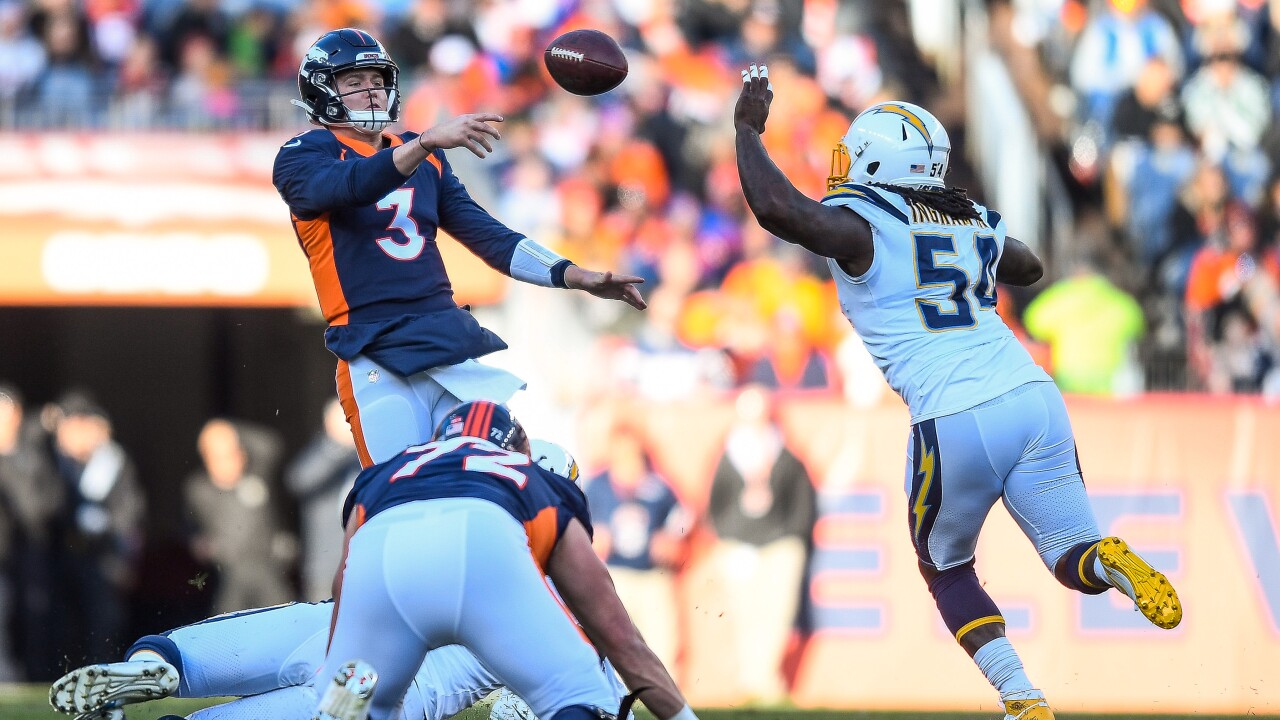 The first highlight video required squinting, a blurry image of disbelief as Courtland Sutton's right arm defied physics and snared the football. The second showed a more typical scene of a quarterback tossing a ball into the end zone as if he were playing catch in his backyard.

The person at the center of the videos was rookie quarterback Drew Lock. It's winter 2019. And for one day it feels like the big thaw has begun. Officially the Broncos' seventh starter since Peyton Manning retired, Lock began Sunday as the team's most talked about prospect since Paxton Lynch. Lynch bombed, but what we knew about Lock suggested he could succeed. He boasted athleticism, elite arm strength, and brimmed with confidence.

Lock represents the Type A to Lynch's Type Z personality. After percolating for three weeks, Lock bubbled in his debut, throwing a pair of first-half touchdowns before the offense retreated into a shell in the Broncos' 23-20 victory over the Chargers before 55,544 fans and an eye-opening 19,094 no-shows.

After so many cruel heartbreaks, kicker Brandon McManus won it with a 53-yard field goal as time expired. It was set up by Lock, who was 18-for-28 for 134 yards, throwing deep to Sutton who drew a 37-yard interference call. Coach Vic Fangio couldn't remember if he told Lock on Friday or Saturday if he was starting. Doesn't matter now. Out with the old and in with the Drew.

“Hopefully he doesn’t have to talk about his starting quarterback for a long, long time," said Lock, who is a pup who played with wag in his tail. "It felt great. That’s just who I am. That’s how I’m going to stay (showing emotion). ... I’ll always be that guy.”

The win came with notable markers. Think about it. This might be the start of something special. Even as coach Fangio reluctantly played the rookie, never announced his promotion and played not to lose, Lock provided hope. With his mom, dad and girlfriend watching from above the Broncos sidelines, Lock connected with Sutton on a pair of first-quarter scores, including the acrobatic 26-yard grab, providing a jarring juxtaposition to the six points scored in the team's previous six quarters.

"Amazing doesn't even begin to describe Courtland's first touchdown," said Lock, who told Sutton to run the fade in the huddle based on the coverage he expected to get.

Too bad there were not more folks to see the start live, but Fangio didn't do the Broncos any favor by never announcing Lock was starting. Still, the victory mattered. The Broncos have never lost 13 games in their history, and they will not this season. And they are no longer in last place in the AFC West, tied with the Chargers at 4-8, but a tick above in the standings because they swept Los Angeles.

“I think it was a good start for (Lock)," Fangio said. "I think there’s promise there.”

When Lock flipped a 5-yard pass to Sutton, the Broncos opened a 14-0 lead with 21 seconds remaining in the opening quarter. Not since the 20-point first-half lava spew at Minnesota had the Broncos looked so functional. Lock, the 50th quarterback to start in the franchise's 60-year history, completed 12 of 19 passes for 123 yards in the first 30 minutes. He went 6-for-9 for 11 yards in the second half, in large part, to three yards and a cloud of rust play-calling.

What should have been a celebration turned to frustration over the final two minutes of the first half. The Broncos reverted to their timid turtle play calling that drew Joe Flacco's ire after the Colts' loss, leaving time for the Chargers to score. And they obliged, breezing 77 yards in three plays after Justin Simmons and Isaac Yiadom collided, leading to a 52-yard reception by Mike Williams followed by Austin Ekeler's 30-yard score as he left a vapor trail of Broncos defenders.

The Broncos attempted to add on in the final seconds, but Fangio nixed a record-breaking 65-yard field goal attempt by McManus on back-to-back plays. McManus lost it, screaming in Fangio's direction as he trotted to the sideline and fired his helmet to the turf. The Broncos turned a Chargers' muffed punt and recovery into a field goal as Royce Freeman ran three times for eight yards from the 21-yard line. The Broncos held a 17-10 advantage at the break, but it felt slippery.

"McManus, that's my guy. I love his confidence. He wanted that opportunity," Broncos cornerback Chris Harris Jr. said. "He delivered at the end. We won a Super Bowl together, so I always believe in him."

In the second half, the Broncos were left to hold on with white knuckles and cracking fingernails. They failed to turn a roughing the punter penalty into points as the offense fizzled near midfield. Listless drives became the pattern, bringing back memories of the cringe-worthy five straight three-and-outs to end the Buffalo game. Fans grew restless in person and on social media. The Broncos lament losing four close games, but their offensive strategy contributed. They collected 14 yards in the third quarter. With 12:18 remaining, the Chargers erased a 14-point deficit as Philip Rivers, possibly playing his last game in Denver as a member of the Chargers, found a wide open Keenan Allen in the left flat. He leaped into the end zone as Will Parks slammed into his hip.

After two quarters of wearing handcuffs, Lock attempted a forward pass -- as in down the field -- on the next drive. Linebacker Denzel Perryman picked off the ball intended for Tim Patrick. It was a bad throw by Lock, but also predictable. He fell out of rhythm. Asked to glue the open wound, the defense responded. Derek Wolfe, who dislocated his left elbow, delivered his second sack, giving him a new career-high of seven. It led to Michael Badgley attempting a 55-yard field goal that ricocheted off the goal post.

With the game tied, the Broncos drove 21 yards in eight plays. The drive fizzled when DaeSean Hamilton dropped a pass in the middle of the field that might have led to a touchdown. Instead, the Broncos turned to McManus, who converted a 52-yard field goal, giving the Broncos a three-point cushion with 4:26 remaining. The game appeared sealed when the Chargers faced a fourth-and-11 with just over two minutes left. But Rivers, furious at the refs and anyone else who would listen, struck back. He found Mike Williams for a 38-yard reception on the sideline as he made a breathtaking catch over Isaac Yiadom, pushing the Chargers to the 38-yard line. Facing a fourth-and-1 at the 29, the Chargers turned to Badgley, who drilled a 46-yarder with 14 seconds remaining.

After playing not to lose in the second half, the Broncos eschewed taking a knee and heading to overtime. They trusted Lock. He began preparing for this day, for this moment back in the spring. He lived with fellow rookie Dalton Risner and would read the plays into the voice memo on his phone with his headphones on. He would then repeat it in the hallway and walk back into the living room as if it were the huddle to grow more accustomed to the playbook and the verbiage.

"I thought he was talking to himself for the longest time," Risner said with a smile.

So Lock took aim at the Chargers one more time, chucking a pass down the right sideline to Sutton. There was no catch, but interference on Casey Hayward as he cut off Sutton. Chargers coach Anthony Lynn insisted, "To make that call, it’d have to be clear and obvious.” For a Broncos team with teeth-grinding walkoff losses to the Bear, Jaguars, Colts and Vikings, it could not have been more blatant. You know, as clear, as say who will be playing quarterback this week.

Wolfe hurts elbow
Derek Wolfe delivered two sacks, but not even setting a new single-season high with seven could ease the pain of dislocating his left elbow. He will undergo an MRI on Monday, but is expected to miss time. "It should have never happened. The plan should have been blown dead. It's frustrating. I am going to be sending a letter to the league," Wolfe told Denver7.

Footnotes
The Broncos' inactive list featured Von Miller. It snapped his streak of 95 straight games played. Miller sat out because of a balky left knee. Fangio was fine with Miller's decision, understanding the discomfort he was dealing with all week. ... The Broncos scored 10 points off two turnovers in the first half. That matched their total for the season through the first 11 games. ... Guard Ron Leary was evaluated for a concussion. He will remain in the concussion protocol early in the week.