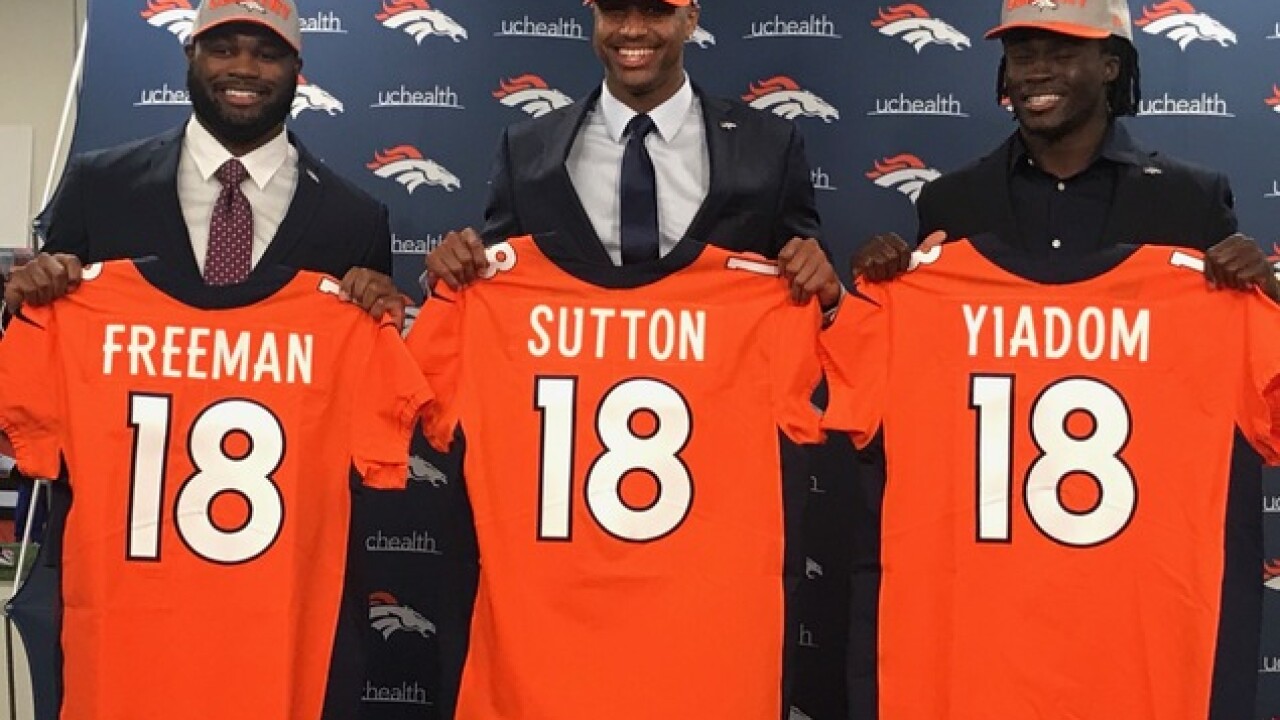 The Broncos coaching staff received and accepted the opportunity to work the Senior Bowl. It allowed a deeper dive into the prospects, a chance to learn the nuances of players not afforded during 15-minute NFL combine interviews. Only bad teams are afforded this chance, almost like a coupon for their draft shopping cart.

"I will say this: We don’t want to coach that for a long time," said Broncos general manager John Elway. "We had a great time at the Senior Bowl but we are good not coaching it for a while.”

The Broncos' posture this entire offseason remained consistent. Elway focused on a rebound in 2018, on preventing back-to-back losing seasons for the first time since 1972. The draft reflected the desire to return to the playoffs after a two-year absence.

Denver passed on a quarterback. When the fourth pick arrived, Josh Rosen and Josh Allen were available. The Broncos didn't hesitate to take defensive end Bradley Chubb, a gift in their lap after the Browns turned heads with their selection of cornerback Denzel Ward fourth overall. When Chubb became available, a trade dissolved. Denver pulled the plug on a deal with Buffalo, which would have netted the Broncos the 12th and 22nd overall selections.

The Broncos were prepared to take Chubb or quarterback Sam Darnold (The Jets scooped up Darnold with the third pick). The danger of going with the best defensive player -- I see minimal risk -- is that Rosen or Allen develop into franchise quarterbacks.

As I said for weeks in this space, on TV and over the 104.3 The Fan airwaves, taking a quarterback failed to make them better this season. And my read on the Broncos since Jan. 1 was an overriding determination to bounce back. In covering the team for eight seasons -- 1996-2000, 2014-2018 -- I have never heard anyone at Dove Valley use the word "patience."

So Chubb arrives, welcomed with open arms by veterans, including All-Pros Von Miller and Chris Harris Jr. and stalwarts Derek Wolfe and Domata Peko, who want to win now.

"I love the pick," Peko told Denver7, echoing identical comments from his teammates. "He's going to help us immediately. He is a playmaker. A gamechanger."

If Peko is right, the Orange Rush is back. The Broncos defense will return to elite status and carry the team into the playoffs. It won't happen without a rocket fuel boost from this draft class. Snapshot grades often prove fruitless -- "We will be graded on wins," Elway said -- but I give the Broncos a B-plus with the 10 picks, a grade elevated by Chubb.

My look at the potential impact and fits of the 10 players selected:

1. Bradley Chubb, DE, North Carolina State, 6-5, 270: Chubb became a disruptive player as a junior -- he owned a first-round grade -- but returned to school. He became better, making him more prepared to contribute early. I look for the Broncos to create two packages for Chubb -- one where he rushes inside and one outside. Keep it simple early in the season. Let him benefit from the focus on Von Miller and Derek Wolfe. Remember Malik Jackson's final season in Denver? I expect Chubb to be that good as a rookie.

2. Courtland Sutton, WR, SMU, 6-3, 218: Sutton profiles as Demaryius Thomas' future replacement. Because he will play behind Thomas, Sutton might fight for snaps. Receivers struggle to make impact in their rookie seasons because of the complex offenses and limited chances. However, Sutton is a sponge. He wants to be great, already pestering Emmanuel Sanders and Thomas for tips. Also, he brings an interesting perspective. Sutton is a former basketball player and safety. He knows how to use his body in space and understands coverages from his days on defense. The Broncos need to learn from the failed Cody Latimer experiment. Find a way to get Sutton and his 36-inch vertical leap on the field in the red zone.

3. Royce Freeman, RB, Oregon, 6-0, 229: Freeman is a propane tank with legs. If the Broncos' scouts are right, he is a faster version of C.J. Anderson. Freeman rushed for 5,621 yards and 60 touchdowns in four seasons. How much tread is left on the tires? That's a fair question, but will not come into play the first few years of his career. Freeman should immediately challenge Devontae Booker for the starting role. He runs with violent intentions. That attitude should bode well as the Broncos emphasize a more physical blocking scheme.

4. Josey Jewell, LB, Iowa, 6-1, 234: Jewell was a tackling machine in college. Yiadom raved about Jewell's play when their teams faced off in a bowl game. Jewell brings a high football IQ -- an unmistakable trait in this year's draft class -- and terrific instincts. However, he must show he can make up for a lack of speed after running a concerning 4.82 40 at the combine. He should serve as a backup and a special teams stalwart as a rookie.

4. DaeSean Hamilton, WR, Penn State, 6-1, 205: Hamilton brings a resume of production, catching 214 passes with 18 career touchdowns. He stood out at the Senior Bowl. Former Broncos defensive back George Coghill, a member of the Broncos' first two Super Bowl championship teams, served as Hamilton's high school position coach. Hamilton grew irritated as other receivers were picked in front of him. Hamilton is one of my picks to click. He's a mature route runner on a team that desperately needs production from the slot receiver spot. Everything in his game -- smarts, speed, experience -- suggests he should contribute early.

5. Troy Fumagalli, TE, Wisconsin, 6-5, 234: Fumagalli's Wisconsin coach Paul Chryst knows the Broncos tight ends coach well, it's his brother Geep. Fumagalli is a willing blocker. He had to at Wisconsin. Like Hamilton, Fumagalli arrives at a position of need. With Virgil Green gone, the Broncos need a functional blocker and a third down target. Fumagalli has improved as a blocker over the past two seasons. The idea of Fumagalli pairing with Jake Butt seems possible, if not likely as the roster is currently constructed.

6. Sam Jones, G, Arizona State, 6-5, 295: Jones, a former ThunderRidge High School star, brings versatility. He will need it to make the team. The ability to play guard and center is important. Jones brings good feet to the position. To stick in the pros, he must embrace competition and continue to add strength. Ideally, he plays closer to 310 pounds, or he could become a candidate for the practice squad.

6. Keishawn Bierra, LB, Washington, 6-1, 223: Bierra is the type of athlete who could upgrade special teams. He will fight for time as a reserve inside linebacker. Is he an upgrade over Zaire Anderson? That could determine if he makes the roster.

7. David Williams, RB, Arkansas, 6-1, 229: Another physical running back. He joins Freeman in the room as the Broncos look to add depth and bigger bodies. Hard to say how he fits. If Freeman delivers, the Broncos could decide a reserve like undrafted free agent Phillip Lindsay fits as a punt returner and special teams contributor.