Broncos Denver7 things to watch for in dress rehearsal vs. Washington 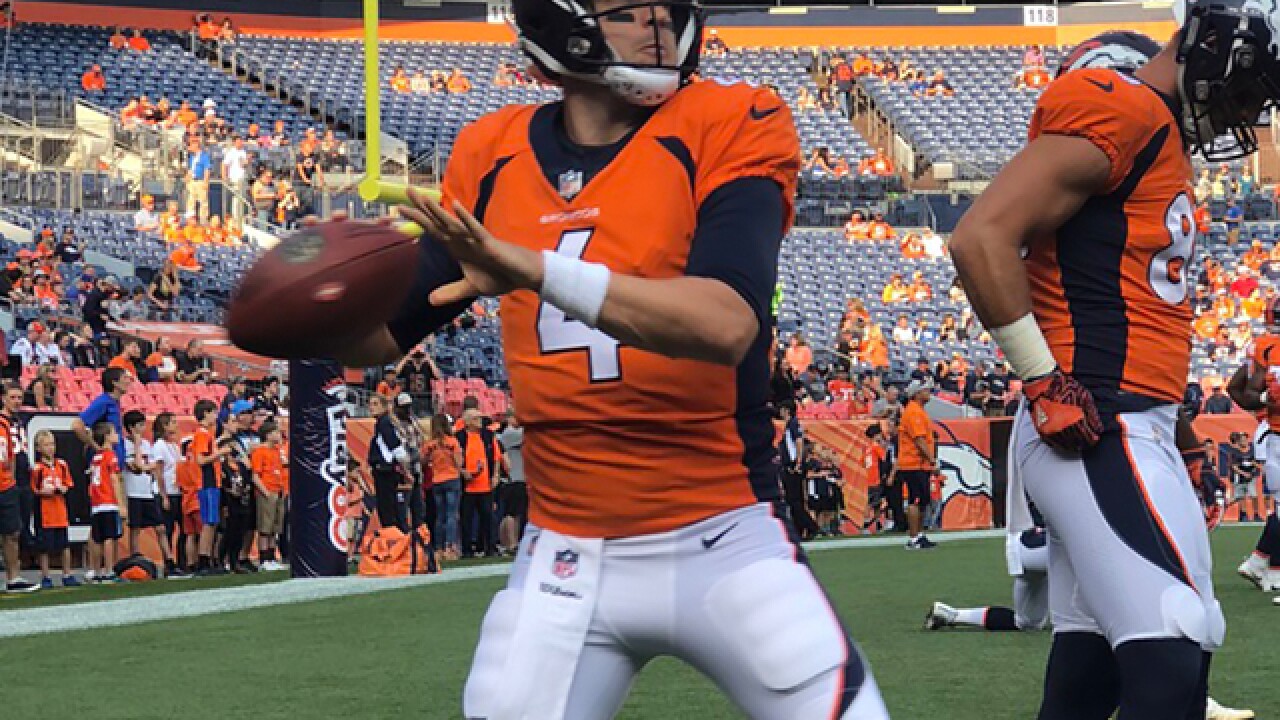 WASHINGTON, D.C. -- Placing mantras on T-shirts and walls remains easy. Anyone can find a paint brush or printing press to articulate a message. Achieving goals remains the hard part.

In year two under first-time head coach Vance Joseph, the Broncos are attempting to avoid the circuitous path when a straighter one to a winning record appears available.

After drinking out of a fire hose last year -- GM John Elway's description -- Joseph appears comfortable, more demonstrative with his newfangled coaching staff. But like his team, he is in prove-it mode. Benefit of the doubt exited with a 5-11 season and an eight-game losing streak that matched the franchise's longest in 50 years. With a new quarterback, no more excuses. The preseason doesn't count, but it matters as the starters stage their final dress rehearsal Friday night against Washington.

My Denver7 Things to Watch For:

1) Close doubts in the Case

Case Keenum fits in every way as a leader. He commands the huddle, knows the offense, demands respect. But I haven't seen the accuracy in games that made him a star last season. Through two games he has completed 9 of 17 passes, none longer than 18 yards. This is the stage to get into a rhythm, to improve his footwork and complete something like 15-of-22 attempts for 165 yards with Demaryius Thomas central to the passing attack.

I need more bell cow. The idea of the Broncos alternating backs for the sake of fairness needs to end. Can rookie Royce Freeman secure the job with bursts on runs and efficiency in pass blocking? It's time to find out. Phillip Lindsay, barring something odd, appears to have secured a spot as a change-of-pace back and special teamer. As for the starting job, I have a feeling this will look like 2015 with Devontae Booker starting and Freeman ending up with more carries in games.

Tight end Jake Butt enjoyed a strong training camp, but you wouldn't know it by the preseason games. He's essentially a rookie. I get it. But the Broncos cannot exit the exhibition season without involving him in the passing game. Time to target him three-to-four times.

Max Garcia represents a surprise of the summer. A player on the bubble when camp started, he has shown new versatility at both guard spots and center. I bring up Garcia because starting left guard Ron Leary's knee is not fully recovered from offseason surgery. Leary believes he will be 100 percent for the season opener. Garcia could play a chunk tonight, so keep an eye on how he does as the line attempts to find continuity and depth.

The Broncos four primary outside linebackers have totaled zero sacks. It would be nice to go into the season with a few from Von Miller, Bradley Chubb, Shane Ray or Shaquil Barrett. Washington's Alex Smith presents a real challenge, and has played his best football against Denver over the last few years while in Kansas City.

The defense continues to evolve with new names. One thing can't change. The Broncos need to stop the run to allow their pass rush to dominate. Derek Wolfe and Domata Peko look strong. Tonight offers a good test with running back Adrian Peterson attempting to make Washington's team.

Reps decrease for rookies this time of summer. It's imperative to do well in limited chances. Receiver Tim Patrick needs a good showing on special teams to lock down a 53-man spot. Other players of interest include outside linebacker Jeff Holland and linebacker A.J. Johnson. Holland has been active as a rusher. And Johnson's talent is obvious, but he's raw after missing almost four years. Can the Broncos find a spot for these two players or are they prime practice squad candidates?