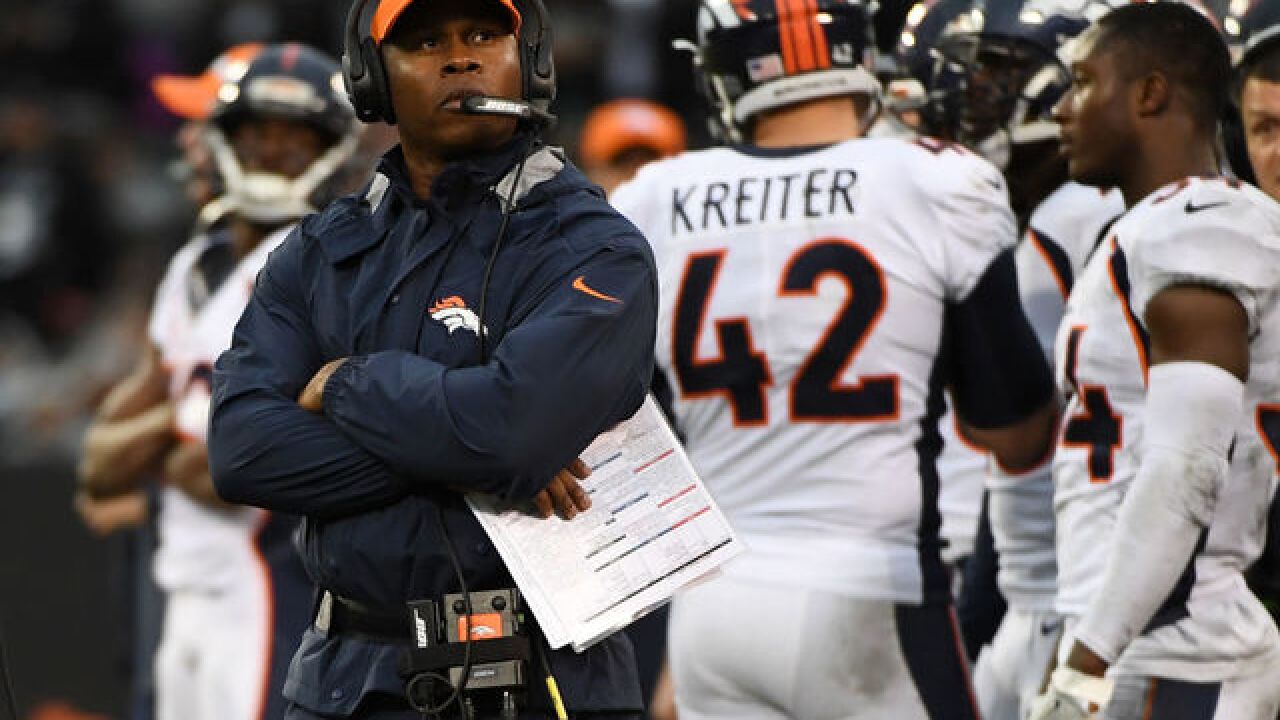 ENGLEWOOD, Colo. -- Multiple times last season, I arrived in the tunnel to the playing field as time expired standing next to general manager John Elway. He stared intently, if not helplessly. I have never covered an athlete more competitive than Elway, the quarterback. Elway, the executive, grapples with the inability to control the outcome after kickoff.

After the Broncos' 5-11 mess last year, Elway went to work. He signed free agent quarterback Case Keenum, knowing a team can go nowhere without belief at the game's most important position. He drafted with a purpose, going after experienced players and leaders -- all but one of his picks was a team captain. For the Broncos to rebound, they needed a quarterback, an infusion of youth, and for coach Vance Joseph to improve dramatically.

Hope has returned. But it is fleeting without winning. The challenge starts in Sunday's opener against the Seattle Seahawks. My Denver7 keys to the game:

No team is better when it takes care of the ball than the Broncos. Dating to 2012, they have won 32 straight games when winning the turnover battle. Last year, the Broncos gave the ball away 34 times, ranking 31st in the NFL. Part of the issue was atrocious teams play that will improve under new coordinator Tom McMahon and veteran punt returner Adam Jones. Seattle will take chances, and fly around. It's imperative the Broncos secure the football if they are to extend their season-opening winning streak to seven games.

The Broncos know who Case Keenum was last year with Minnesota. Do they know who Case Keenum is this year? Keenum fired 22 touchdowns with seven interceptions for the Vikings. He protects the ball. The Broncos require flashes of brilliance, not just a game manager. Keenum posted zero touchdowns in the preseason. It is a balancing act. The Broncos don't need him to force the issue. However, when plays pop -- especially deep strikes -- he needs to be fearless in going to Emmanuel Sanders and Courtland Sutton. If Keenum can post a 3-to-1 TD to pick ratio, the Broncos will return to the playoffs and avoid back-to-back losing seasons for the first time since 1972.

Don't forget that when Keenum excelled in Minnesota, he leaned on a powerful ground game. The Seahawks are vulnerable against the run. Royce Freeman represents the first Broncos rookie to start at running back since Terrell Davis in 1995. He plays older, and has the type of vision to make second-level defenders miss. It might be boring early, but Denver must commit to the ground game to set up play-action in the second half.

The Broncos understand the problems Seattle quarterback Russell Wilson presents. If not the best mobile quarterback, he ranks second to Green Bay's Aaron Rodgers. Broncos linebacker Shane Ray compared Wilson's footwork to Michael Vick's. The Broncos must contain him on third down when he runs with purpose against teams that lean heavily on man coverage. I would put a spy on him, if necessary. The key is making the Seahawks one dimensional. Chris Carson runs violently, but has little experience. Seattle has not been effective running the ball since Marshawn Lynch left, and the Broncos, on paper, should be stout against the ground attack. Keep the Seahawks one dimensional, and it will force Wilson into a few mistakes.

Von Miller represents the Broncos' best player. Seattle will chip him and slide protection to his side. Defensive coordinator Joe Woods must be better and more creative than a year ago in how he frees up Miller. Having rookie Bradley Chubb and a healthy Shane Ray should set up Miller for more sack opportunities. Tackles can't block him on Twitter. Get Von into space, and allow him to deliver a strip sack. The winner of the Von-Wilson matchup should determine the game's outcome.

It sounds simple. But starting fast carries huge benefits at home. It riles up the crowd, makes audibles difficult, and it allows cornerback Chris Harris Jr. and crew to take chances against an undermanned Seattle receiving corps.

Vance Joseph knows he must prove himself with the clock ticking. No more benefit of the doubt after last season's humiliating eight-game losing streak. The faulty game plans, mindless penalties and awful special teams fell on his doorstep. Now, he has a competent quarterback and revamped coaching staff that challenges players. No excuses. Be organized. Be aggressive. And play to win, not to avoid a loss.