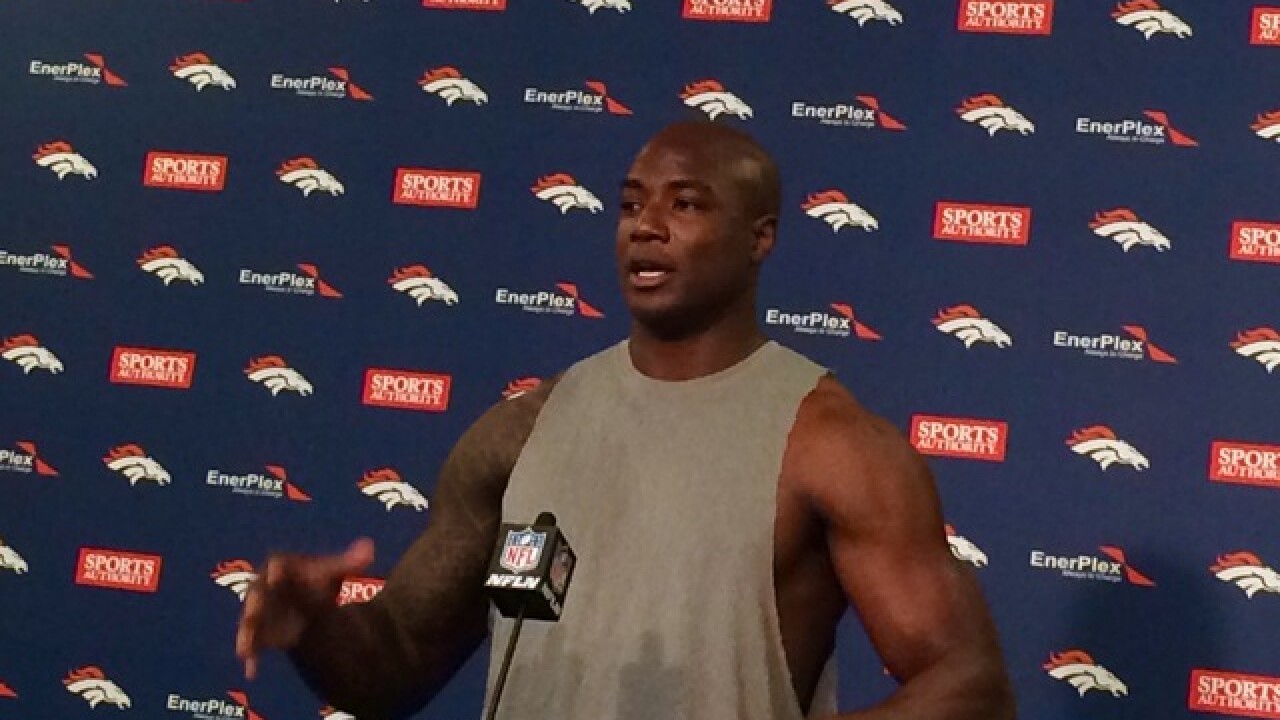 CENTENNIAL, Colo. -- DeMarcus Ware stared down his opponent. He let out emotion. And he worked his hands. Not rushing, but texting. As the Broncos played the Bengals, Ware sent out congratulatory messages. He was watching his lesson plan come to life.

During the week, Ware, who is out for roughly a month after a plate was inserted in his broken right forearm, provided tips to Von Miller, Shane Ray and Shaquil Barrett. He told them what to expect from the offensive tackles, and how to switch moves on different sets. Ray experienced a breakout performance, recording three sacks.

"I was very proud of Shane. Sometimes you get a young guy who doesn't listen. Even though last week Shane wasn't writing anything down during the meetings, in the game he was doing exactly what I said," Ware explained to Denver7. "After the game Shane told me, 'It worked.' I am going to give him everything I got because I want him to be great. I told him, 'You got three sacks, now don't be a one-hit wonder.'"

Miller laughed when asked about Ware's intensity. His text messages were "on point." And when the Broncos arrived Monday morning, they had something else waiting.

"He had already devised a game plan for us on how to attack Tampa Bay," Miller said. "That's just DeMarcus, man."

Ware walked around the locker room without a cast present. He only has to wear it when out in public as protection. He is healing on schedule and hopes to soon start cardio activity. While missing time stinks, Ware recognizes that it could benefit him in the long run.

Trevor Siemian is more team-first than first-team. When asked about winning AFC Offensive Player of the Week honors, he directed praise to his receivers and offensive line.

... The Broncos will make their second straight trip back East. Hello, humidity. To prepare, some players are wearing hoods and long sleeves in practice.

... Right tackle Donald Stephenson will not start this week. Ty Sambrailo gets another chance after struggling. Stephenson's left calf has improved, but not enough to return.

... Justin Simmons (broken bone, left wrist) continues to improve. He was told last Saturday he wouldn't play on Sunday as a precaution. He hopes to play this week since his wrist has improved.

Want Broncos news? Denver7 Broncos insider Troy E. Renck is your source. He talks to the players, covers the games and reports scoops on Denver7 and the Denver7 app. He is a CU grad who has covered pro sports in Colorado since 1996, including 14 years at The Denver Post. Follow him on Facebook, Twitter and TheDenverChannel.com’s Broncos page. Troy welcomes most of your emails at Troy.Renck@kmgh.com.