Broncos deliver first win of the season, beating the Chargers 20-13 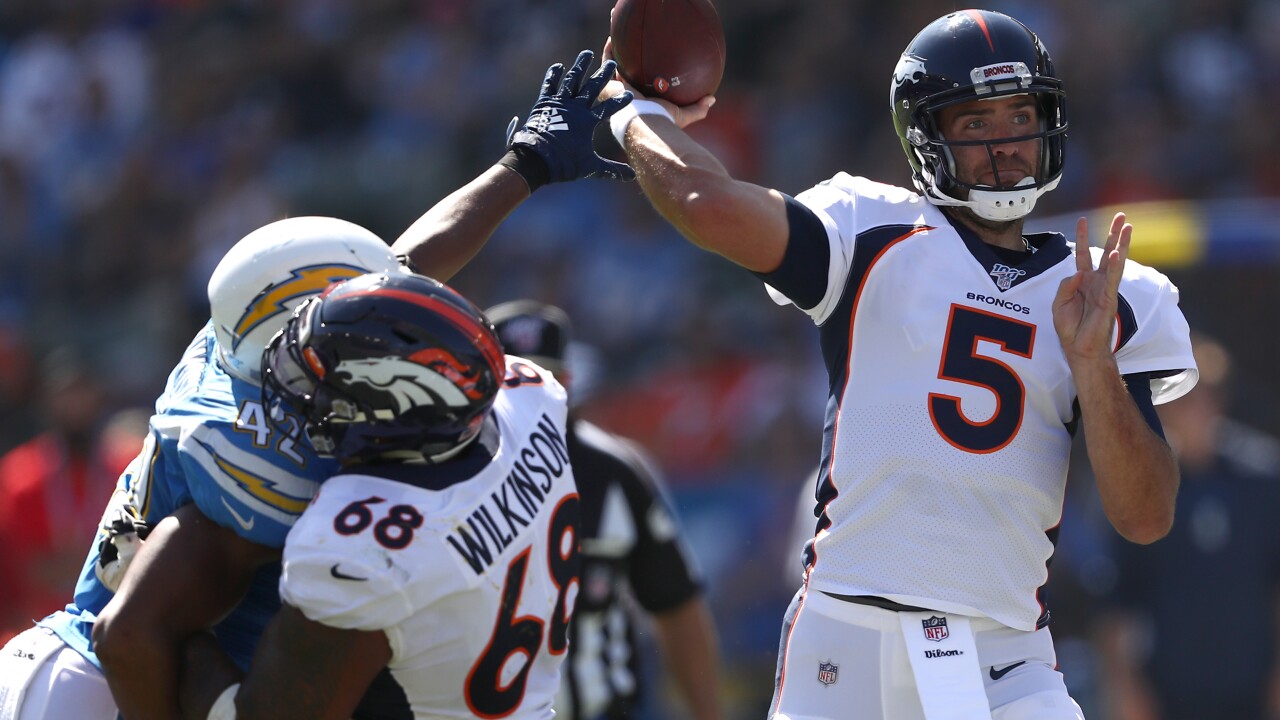 That's all Broncos fans wanted to see. Going 0-for-September stinks. But losing with tire tracks on the chest and dazed looks, that was difficult to digest for anyone who follows a proud franchise that won a Super Bowl in this state in 2016.

"It's good to finally get it done. We have to continue it now," cornerback Chris Harris Jr. said. "And shout out to Broncos fans and Broncos country. They came out there deep. It was hotter than hell and they gave us a ton of energy to help us finish."

Maybe the gambler who placed a $70,000 outright bet on the Broncos at the South Point Casino in Las Vegas knew something -- that the Broncos would respond with character and anger. The victory came with several notable distinctions. It represented the 500th in franchise history. It marked Vic Fangio's first as a head coach after four decades as an assistant at the high school, collegiate and pro levels. And it stands as the triumph that snapped an eight-game losing streaking dating to last season, the longest active skid in the NFL.

"Obviously, the next few days will be better for me and everyone else than after the last two games," said Fangio, who received the game ball from general manager John Elway, but handed it to linebacker Alexander Johnson standing nearby. "I am happy for this team. I know the results don't show it. And results can obscure a lot of things, and justifiably so. But these guys have been doing everything we've asked. (Chargers coach) Anthony Lynn told me before the game, 'Hey your guys are playing really, really hard. Just hang in there.'^"

So distraught with how was team was mauled, Lynn apologized to the media afterward for having to watch the performance. It was more paint-by-numbers than Picasso for the Broncos, but they were not complaining.

"It's just a culmination of all the work we've put in," said outside linebacker Malik Reed. "And the desire from each and everyone of the guys."

Everyone, it has been said, is tough until they get punched in the face. The Broncos used their jaw a a speed bag, and finally had a enough as multiple offensive linemen agreed afterward. They produced a first quarter worthy of the Peyton Manning salad days. It began with a gameplan featuring more wrinkles than a Shar-pei. Joe Flacco opened with a 26-yard vertical strike to tight end Jeff Heuerman. Be still my caffeinated heart. Phillip Lindsay followed with bursts of 21, 12 and 4 -- the latter a scoot into the end zone to give the Broncos their first touchdown on an opening possession in 13 games.

"I just followed the lead of the offensive line," said Lindsay, who finished with 114 yards on 15 carries, part of the Broncos' 191 yards on the ground.

Suddenly, the Broncos were cooking with grease. On their second drive, Flacco connected with Courtland Sutton over the middle. He became a diesel with mudflaps, trucking through a defender for a 70-yard score, the longest passing touchdown since Bennie Fowler's 76-yarder against the Kansas City Chiefs in 2016.

On a day of firsts, the Broncos finally broke the seal with a takeaway. I joked on radio that they needed to shoplift a pack of gum to get the taste of a takeaway or maybe play Jane's Addiction "Been Caught Stealing." No need. Justin Simmons intercepted Philip Rivers on a tipped pass involving plaster coverage by Chris Harris Jr. For historians, it came in the fifth game with 2:20 remaining in the first quarter.

"We knew we would get one," Simmons said. "It was a relief, then it was time to get to work and finish. We talked about it in the first quarter, we have to close things out, especially the way the last two home games went."

Then, as they are wont to do, the Broncos began to tiptoe toward danger. Uchenna Nwosu beat left tackle Garett Bolles around the edge, stripping the ball from Flacco as he attempted to throw.

The Chargers failed to capitalize -- something unheard of during the Broncos' losing streak -- as Chase McLaughlin took a divot on a 48-yard field goal attempt. The Broncos answered with an eight-play march that featured heavy doses of Royce Freeman. The drive halted with a 40-yard Brandon McManus field goal, giving Denver a 17-0 lead, the largest of the season. It came moments after cornerback Devante Bausby suffered a neck injury as teammate Johnson struck him in the head with his helmet during a tackle. Bausby left on a cart as teammates gathered around him. He had movement in all extremities and was transported to a local hospital for evaluation. He underwent an MRI and flew home with the team.

So, big cushion. Time for chilaxification? Not immediately. But it was lurking. The Broncos were forced to tie a knot at the end of the rope and hang on.

"We got out to a nice lead, playing well on both sides of the ball," Fangio said. "We finished, but it was painful."

Under similar circumstances last week -- holding a 17-3 advantage over Jacksonville -- the Broncos wilted. They made a stand in the closing seconds before half with Kareem Jackson lighting up players like the Las Vegas strip. He stuffed Austin Ekeler at the goal line as time expired and Denver's defense followed by producing a three-and-out to start the third. Jackson finished with a team-high 10 tackles, bringing much-needed swagger to the unit.

"I try to be a piece of the puzzle. It's not about me, it's not about that guy," Jackson said to my question after the game about his impact. "It's about all 11 of us out there. If we're all on the same page and all bringing energy, I think we can feed off one another and it shows in our play the way it did today."

Added Harris, "I love him at safety because I’m letting the receivers know, 'If y’all cross that middle, KJ is gonna hit you.'^"

Trouble arrived in late in the third. Flacco had ball tipped at line of scrimmage and Kyzir White picked it off. leaving the Chargers with the ball at the 7-yard line. Johnson -- starting in the place of an injured Josey Jewell -- responded with the biggest play of his career, intercepting Rivers in the end zone. Flacco inexplicably almost turned it over on back-to-back passes, but Michael Davis declined the re-gifting.

Denver probably deserved to lose the shutout because of sloppy play. Enter special teams with a blunder. Desmond King raced 68 yards on a punt return -- after breaking a tackle from longsnapper Casey Kreiter there was no one around -- for the score, shaving the deficit to 10 heading into the fourth quarter.

After Brandon McManus missed a 54-yarder -- he's 2-for-9 from 50-yards plus since the start of 2018 -- McLaughlin nailed a 45-yarder. It left Denver in a nervy position with 6:47 remaining. The defense begged for the game to be in its hands after walkoff losses to the Bears and Jaguars. They put on their oven mitts, and handled the heat. They held late in the fourth, forcing the Chargers to punt. That produced a 46-yard field goal from McManus, inflating the lead to 10 points with just under two minutes remaining.

This win was about sawdust, about bareknuckles, about fighting back. Sure, it spawned a few more ulcers. But it was a start. And it was a first because the Broncos finally showed, at last, they could finish.

"But nobody is celebrating in here," right guard Dalton Risner said. "It's one win. Now, it's about stacking them up."

Defensive adjustments
After the Jaguars gashed the Broncos, Fangio made some lineup adjustments due to the ineffectiveness and injury. The new starters included outside linebacker Malik Reed, slot cormerback Duke Dawson, linebacker Alexander Johnson, defensive lineman Mike Purcell. Isaac Yiadom replaced Bausby and drew two penalties on the same drive, both holding. Devontae Harris, claimed off waivers before the season, replaced him to open the third quarter. Fangio stressed before the season that tackling is non-negotiable. As such, Adam Gotsis was a healthy scratch and Will Parks played fewer reps at safety.

Hollins hurt
Justin Hollins suffered a sprained knee iwhile rushing Rivers in the second quarter. He left to the locker room and was quickly ruled out.
Jeremiah Attaochu is next man up at outside linebacker. The Broncos signed him after losing star Bradley Chubb to a torn left ACL last week. The Broncos worked out Dekoda Watson recently. He could be back in the mix this week.

Footnotes
Right tackle Ja'Wuan James, after an initial setback earlier this month, made real progress at practice last week. The highest paid lineman in Broncos' history is on track to return to the starting lineup against the Tennessee Titans. His season to date consists of 10 snaps at Oakland on opening night before he wretched his leg on the dirt infield. ... It will be interesting to see if the Broncos use Elijah Wilkinson as the top reserve going forward or moving him inside some. ... The Broncos health improved for the game with the return of linebacker and special teams ace Joe Jones. The inactives were as follows and included one surprise: defensive end Adam Gotsis. He has not made the same impact as a year ago, and lost his spot as a healthy scratch to Mike Purcell, who Fangio wanted to beef up the rush defense. Joining Gotsis were James, Bryce Callahan (foot, out at least another month, if not longer), linebacker Josey Jewell (hamstring, likely back vs. Titans), receiver Juwann Winfree, tight end Troy Fumagali and tackle Calvin Anderson. Andrew Beck was active in front of Fumagali. ... Upon further review, Dre'Mont Jones was credited for a blocked field goal in the first half. And you thought they forget about Dre? ... The Broncos held the Chargers to 35 yards rushing after nearly allowing 300 last week to Jacksonville.