Broncos 'D' will feature Von, Wolfe vs. 49ers on Saturday 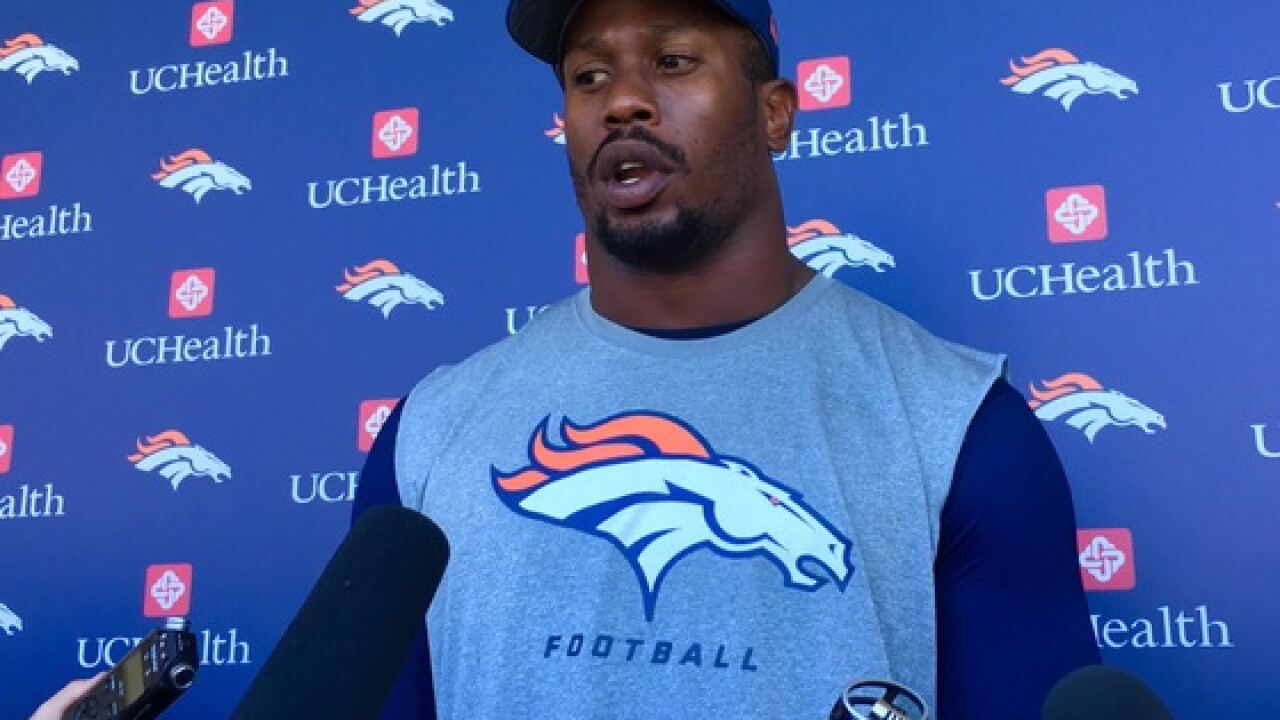 CENTENNIAL, Colo. -- Von Miller can glide. He proved that for several weeks on "Dancing With The Stars" with partner Witney Carson. Von Miller can dress. Just check out his daily attire or his wardrobe in the new "Madden 17" video as he moves to "Start Me" taken from Justin Bieber's "Sorry." Von Miller can also wreck game plans.

Football, he admitted Thursday, is his life. Saturday, he returns to the field for the first time since overwhelming the Carolina Panthers in Super Bowl 50. Following three weeks of easing back into the fold after missing offseason workouts, Miller is ready to launch.

"I want to go out there and play full speed," Miller said. "I want to leave it all on the field. I want to build on the type of player I know I can be."

Miller possesses unique strength and leverage. Combined with his quickness and it's no wonder only Hall of Famer Reggie White and reigning NFL defensive player of the year J.J. Watt have averaged more sacks per game than Miller in his career. Miller figures to play a few series against San Francisco. It will be the first look at last year's defense in nearly whole, save for cornerback Aqib Talib and DeMarcus Ware.

Ware will practice next week as he recovers from back issues. And the "No Fly Zone'' -- the members are easy to identify at practice with socks bearing their nickname -- will get Chris Harris back after he rested in the opener. Aqib Talib, working back in after suffering a gunshot wound in June, is expected to start the following week.

In a bit of a surprise, defensive end Derek Wolfe is likely to practice Friday and play in the game. He rolled his ankle on Wednesday. However, Wolfe walked out to Thursday's workout with no limp. Darius Kilgo started in his place against the San Francisco 49ers. The Broncos plan to use Kilgo as they did Vance Walker, rotating him at tackle and end.

Coach Gary Kubiak, as far as we know, is not asking Von Miller's advice in the quarterback race. But as his wont, Miller had a wonderful take on the position when asked what type of quarterbacks give him the most trouble.

"In the National Football League, if the quarterback is starting he's pretty good. He probably can do some stuff you hate," Miller said. "As much as you'd like to have a slow quarterback with no accuracy, that really can't read defenses, you know that doesn't happen."

Running back Ronnie Hillman remains in a fight for a roster spot with Kapri Bibbs. How they play on special teams could help make the decision. Hillman has been practicing this week as the up man on kickoff return. Rookie Devonate Booker continues to get second-team reps. ... Defensive coordinator Wade Phillips, who is writing a book on the 3-4 defense, praised the work of young corner Lorenzo Doss. He joked the kid has a rabbit's foot for all of his interceptions -- six in the past 10 days -- but loves his nose for the ball. ... Thursday's practice became chippy early. The 49ers were aggressive after being mauled on both sides of the ball Wednesday. Five different scuffles broke out. Kubiak called his players together at one point. "I told them, 'Do you want to practice now or do you want to come back tonight?" We were too busy with personal agendas."