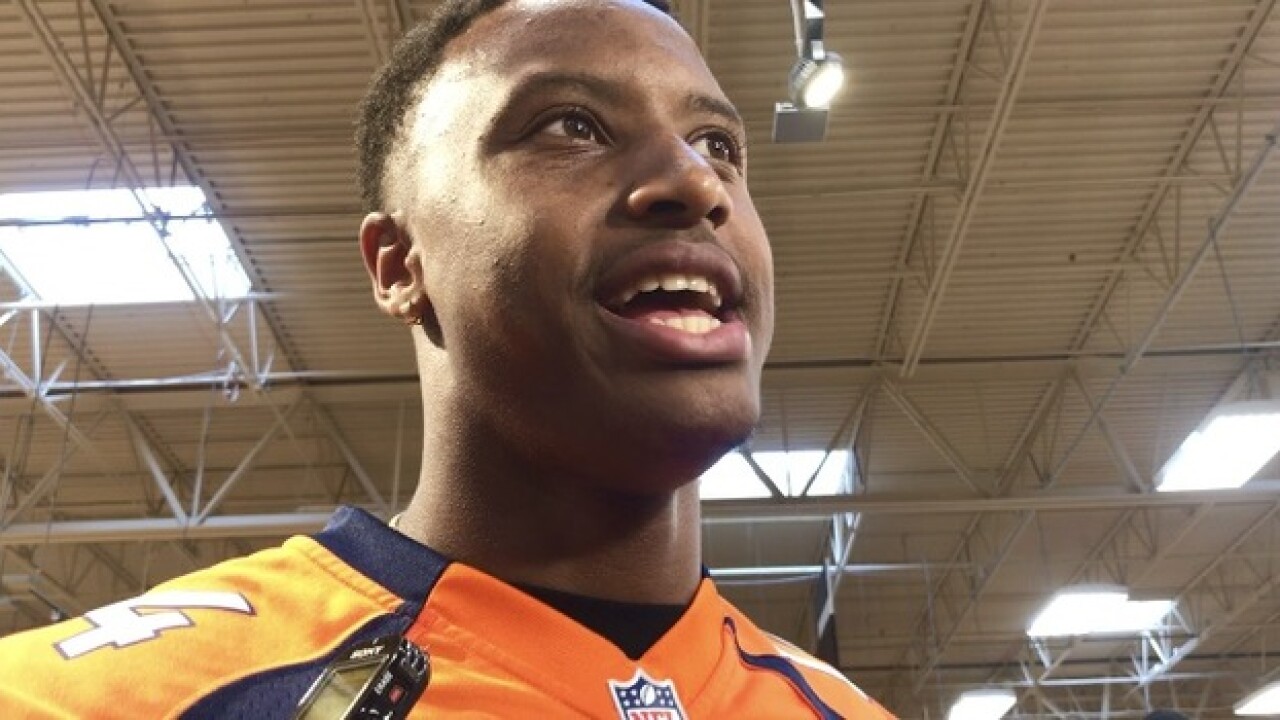 Numbers can be obtained to explain everything from a player's tendencies to fitness and speed in real time. The Broncos acquire information each day, monitoring the players with something like GPS in their shoulder pads. It is more than the public would ever need to know. But something interesting emerged. Courtland Sutton ranks as the Broncos fastest receiver.

Big deal? Well, it is because he's such a big dude. He is listed at 6-foot-4, 218 pounds. He plays and seems bigger. Remember the salad days of receiver Brandon Marshall? Sutton offers a physical facsimile. If he could exceed Marshall's statistical impact as a rookie -- he caught 20 passes for two touchdowns -- the Broncos offense would improve dramatically.

Sutton caught high-leaping touchdown passes on back-to-days, and followed it Wednesday with repeated success in 7-on-7 drills

"He's special. He's definitely a red zone threat," safety Darian Stewart told Denver7. "He's going to make some plays for us. I am looking for him to be that third receiver. He is promising."

Coach Vance Joseph, learning from last year's missteps, has pumped the brakes about the team and the rookies. It's early in camp, when no conclusions should be drawn. But Sutton's ability remains impossible to ignore.

"I just gotta keep working," Sutton said. "I have to continue to do well to earn (quarterback) Case's (Keenum) trust. I have to do the right things 100 percent of the time."

Of course Sutton makes his share of mistakes. He's learning a new offense. Yet, he has left defensive backs talking and shaking their heads. It's easy to envision Sutton playing outside with Demaryius Thomas with Emmanuel Sanders working some in the slot.

Versatility, however, remains important, according to offensive coordinator Bill Musgrave. He wants Sutton well-versed on all spots to make him less predictable to defenses.

"I know we were excited to get him. We were amazed that he was there when we picked (40th overall in the second round)," offensive coordinator Bill Musgrave said. "We know he's young. But we are expecting big things from him. It's fun to work with young guys who have that drive and desire to get better."

Quarterback Paxton Lynch enjoyed his strongest day of camp. He completed multiple touchdowns and showed accuracy lacking early in the week. At one point, Lynch threw a touchdown and celebrated by exuding the Tom Brady line, "Let's go!"  The Broncos' backup quarterback position is an interesting follow. General manager John Elway wants to know the reserve can win a few games if called upon. Lynch didn't look capable of that the first few practices. Can he build on Wednesday's outing? Consistency is critical for Lynch, otherwise the Broncos might look to add a veteran quarterback at the end of training camp.

The Broncos continue to take a cautious approach with injuries. Safety Su'a Cravens and tight end Jeff Heuerman sat out with knee soreness. Heuerman has missed multiple days. Cornerback Tramaine Brock told Denver7 he expects to return in a few days after suffering a hamstring injury. Brock continues adjusting to the altitude. He is competing for the nickelback spot with C.J. Smith, rookie Isaac Yiadom,  second-year player Brendan Langley and Marcus Rios, who returned to practice after sitting out with a sore hip. ... Nose tackle Domata Peko received planned rest the second half of practice. ... Offensive coordinator Bill Musgrave remains intrigued by the stable of running backs. He praised De'Angelo Henderson's work thus far in camp.